In Lexington, Selfies with American Pharoah, Then ‘Bourbon and Branch’ 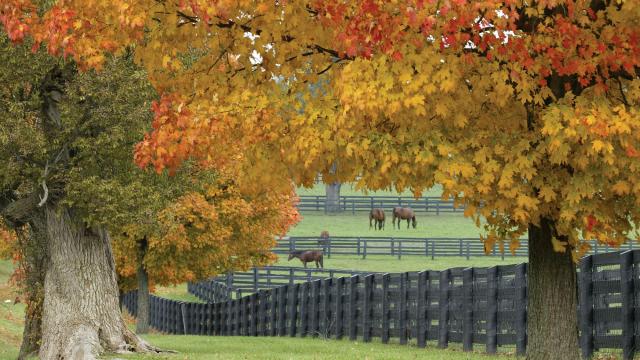 The Kentucky Derby, held annually at Churchill Downs in Louisville, outdraws other U.S. horse races, from the Belmont Stakes in Elmont, New York, to the Santa Anita Derby, in Arcadia, California. But thoroughbred lovers champion Keeneland Race Course in Lexington, 70 miles east, as the intimate alternative with the hospitable practice of welcoming fans behind the scenes, from morning training sessions to the backside barns.

And Keeneland is home to two annual meets, a monthlong series of contests in April that precede the Kentucky Derby and another in October that leads up to the Breeders’ Cup, which will be held this year at Churchill Downs, Nov. 2-3.

Beyond the track, much is changing in Lexington, the capital of U.S. horse country and the 15-county Bluegrass Region. New locavore restaurants and whiskey distillery revivals add post-race appeal, as do thoroughbred farms themselves. Eager to expand audiences for racing, these stately farms, noted for their architecturally distinct barns and pastures encircled by double-railed fences, are throwing open the barn doors to tours.

The 3-year-old nonprofit booking service Horse Country organizes farm tours designed to engage race fans by introducing them to the horse-rearing system. There are equine veterinary clinics on Horse Country, stallion specialists, including Godolphin at Jonabell, owned by Sheik Muhammed bin Rashid al-Maktoum of Dubai, and farms like Claiborne, the birthplace of super horse Secretariat and 10 other Kentucky Derby winners.

“Horses used to be the signature industry, then bourbon came along and they started making distilling interesting,” said Headley Bell, a fifth-generation horseman and the managing partner of his family’s Mill Ridge Farm, a popular nursery among Horse Country members, and a photogenic place to pet foals and feed buckets of oats to feisty yearlings.

“It was the drive between the distilleries, that beautiful countryside, that everybody loved so much,” he added. “It was our thought that if they could make distilling interesting, why can’t we let people come on the farm and get to know the horse?”

Drawing the biggest Horse Country tours, Coolmore at Ashford Stud is home to the only two living Triple Crown winners, American Pharoah and, as of September, Justify.

To visit Coolmore is not just to appreciate the beauty of the chestnut Justify or American Pharoah, a powerful bay who is generally unfazed by tourgoers snapping selfies with him from behind a picket fence. It’s also a fascinating and visceral tutorial in horse-racing economics. Champions like these retire to stand at stud, commanding thousands to “cover” or breed with a mare (a thoroughbred must be bred live, rather than through artificial insemination, according to the Jockey Club, which sets race industry standards). In the breeding arena, with padded walls and floor mats, Coolmore stallions like Uncle Moe, sire of the 2016 Kentucky Derby winner Nyquist, get $125,000 per breeding, which may occur several times each day. The fee for Justify in 2019 will be $150,000.

Such earnings clearly fund the maintenance of vast meadows surrounded by miles of fencing, stone barns with varnished interiors that smell of hay rather than manure, and spongy faux-brick walkways that are soft on hoofs.

Like barn and bourbon tourism, Lexington itself is growing and the City Council is debating expanding its borders. The population grew 10 percent in the past decade and, as one measure of its trendiness, a branch of the contemporary art-filled 21c Museum Hotel opened in 2016.

“When I was growing up, Lexington was known as the perfect market to test new fast-food concepts,” said chef Ouita Michel, who owns a string of farm-to-table restaurants in central Kentucky. She points to Long John Silver’s and Fazoli’s, which both have roots in Lexington.

But the state’s settlement with the tobacco industry in 1998 brought $1.9 billion to Kentucky, much of it invested in diversifying agriculture, which has helped seed new vegetable farms, aquaponic ventures and farmers’ markets.

“Eighteen years ago, when I started our first restaurant, Holly Hill Inn, outside of Lexington in Midway, it felt like pushing a big boulder uphill to get people interested in local, organic food,” said Michel, whose latest Lexington restaurant, Honeywood, features a Kentucky-forward menu with dishes like shaved ham and meatless beet-loaf.

The locals like to talk about the area’s limestone-filtered water as building strong horses and better bourbon.

Amir Peay spent more than 10 years restoring the James E. Pepper distillery, which again makes whiskeys sold under the 1776 brand, named for the year it was founded. The 1930s-vintage distillery languished, abandoned, for more than 50 years before Peay found it. Reopened in July with a tasting center, the distillery is next to the Town Branch of Elkhorn Creek, once a water source for whiskey.

“Town Branch gave us bourbon and branch,” a common term for whiskey and water, said Peay.

About 25 miles west of town in Frankfort, Castle & Key Distillery also recently opened, reviving an 1887 bourbon plant originally founded by the whiskey maverick Col. Edmund Haynes Taylor Jr. who is considered the father of bourbon tourism for building a railroad track that brought visitors to the estate. The restored, 113-acre grounds hosts Taylor’s castle home, European-style gardens and a walking path. Nearby, Woodford Reserve Distillery draws droves of bourbon fans not just for tours and tastings, but for cocktail classes and guided walks among the stone and brick barrelhouses of the National Historic Landmark that dates back to 1812.

The Bluegrass, already a horse-centric area, grew when eastern progressives railed against gambling in the 1890s. Seeking to establish a track for his friends to run their horses, Jack Keene, a farmer, began building Keeneland in 1916. By 1936, strapped by the Depression, Keene sold the property to local horsemen who turned the original 147-acre farm, track and clubhouse into one of the industry’s most accessible tracks.

At Keeneland, the public is invited throughout the year to tour areas that most courses maintain as private, including the backside stables and track diner. Outside race seasons, Keeneland holds thoroughbred auctions that draw global billionaires and resource-pooling syndicates eager to gamble on a promising foal. In season, with a $5 general-admission ticket, racegoers can grab a spot on the rail and catch horses pounding by just yards away.

The track goes out of its way to cultivate younger fans. During race season, family-friendly pancake breakfasts include narrated track workouts, handicapping seminars, jockey question-and-answer sessions and chances for children to dress up in jockey’s silks. Between races, in the tunnels that link the paddock to the track, outriders line up, inviting fans to pet their horses.

“We want our fans to get close to the people and the animals that make the sport so special,” said Christa Marrilla, the marketing director at Keeneland. “That’s how we create fans.” One could be cynical about the number of Keeneland employees with “Ask Me About Betting” buttons affixed to their green vests. These are betologists, the men and women available to help track newcomers understand race wagering. But at least one pair seemed less interested in driving revenue than debating strategies.