In Kenya, Sparing Girls From a Painful Rite of Passage 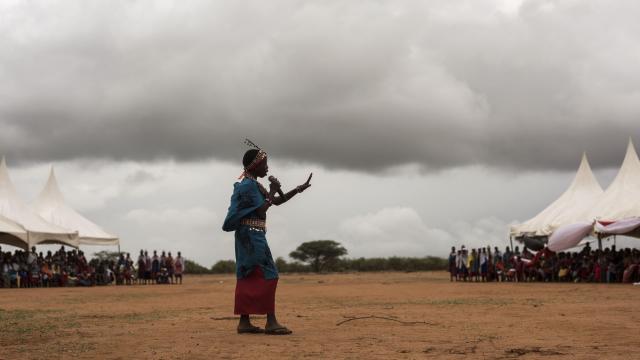 LENKISEM, Kenya — The first time cutting season came around, Nice Leng’ete and her older sister ran away and hid all night in a tree. The second time, her sister refused to hide.

For Maasai families, the cutting ceremony is a celebration that transforms girls into women and marks daughters as eligible brides. But to 8-year-old Nice, it seemed like a threat: She’d be held down by bigger, stronger women, and her clitoris would be cut. She’d bleed, a lot. Most girls fainted. Some died.

Still, her sister gave in.

“I had tried to tell her, ‘We are running for something that’s worth it,'” recalled Leng’ete, now 27. “But I couldn’t help her.”

Leng’ete never forgot what her sister suffered, and as she grew up, she was determined to protect other Maasai girls. She started a program that goes village to village, collaborating with elders and girls to create a new rite of passage — without the cutting.

In seven years, she has helped 50,000 girls avoid the cutting ritual.

Her work mirrors national — and global — trends. Rates of female genital cutting worldwide have fallen 14 percent in the last 30 years. Here in Kenya, cases have fallen more than twice that fast.

New laws have made a difference, here and elsewhere. Kenya outlawed female genital cutting in 2011, and a special unit for investigating cutting cases, opened in 2014, prosecuted 76 cases in its first two years.

But laws made in the capital often have little effect on culture in the countryside, where custom is deeply ingrained and men’s power is virtually absolute.

In Maasai country, male elders enforce the customs, and the cut has long been one of the most important. The belief has been that women aren’t women unless they are cut, which means men can’t take them as wives. Much of how Maasai society is organized relies, in one way or another, on that ritual.

So the fight against female genital cutting, experts agree, needs Leng’ete’s kind of work: persuading village after village, and elder after elder, to overturn centuries-old custom.

“Some rural old men asked us, ‘What will we call this woman who is all grown up, married, has children and is not circumcised?'” she added. “They do not have a name for such a kind of woman.”

Leng’ete’s community did have a name for her. “It’s a very bad name in my native tongue,” she said, one meant to shame a whole family.

That shame is one reason families pressure reluctant girls. Leng’ete’s grandfather, her guardian, took a gentler approach and asked her, after her second escape, to explain herself.

But when he brought it up again, she still refused.

“I told him, ‘I will never come back even if it means being a street child,'” she said. “When he realized I wanted to run away from him forever, he said: ‘Let’s leave her. When she wants to go, she will tell us,'” Leng’ete remembered.

Her grandfather was an elder, so he couldn’t be overruled. But the community still ostracized her.

“Families wouldn’t let me play with their daughters,” she said over lunch at a Nairobi cafe. “Everyone saw me as a bad example, someone who disrespected her family and went against the ways of the community.”

Things were different for her sister. After the cutting ceremony, she was taken out of school and, at age 12, married off to an abusive, older man. She had three children.

Leng’ete, meanwhile, began to remake her reputation. When she became the first girl in her village to go to high school, she noticed that younger Maasai girls admired her uniform. She asked them if they wanted to be like her. “I wanted to show them I am happy with my life,” she said.

She told the girls that she had opportunities because she had refused the cut, and soon some turned up at her house, fleeing the ceremony just as she had.

Because she helped them, she had to hide — again. “The morans wanted to beat me,” she said, using the Maasai word for younger men who assist the elders in defending the community’s customs.

So she changed her approach. She would bargain with the elders, just as she had bargained with her grandfather. But it wouldn’t be easy.

“The cultural elders are like a small parliament in my village,” she said. “They have not gone to school, but they have so much power. All the decisions come from them.”

Traditionally, women aren’t allowed to address elders. Leng’ete realized she had a chance to counter tradition after the elders sent her to a workshop on adolescent and sexual health run by Amref, a Kenyan health organization.

She told the elders that she had a duty to share what she had learned with the whole village. It was her first bargaining chip, and it — almost — worked. They gave her permission to address the younger men, but none of them stayed to listen to her.

“No girl had been courageous enough before to challenge the status quo, to challenge men,” Douglas Meritei, one of those men, remembered.

She kept trying, for two more years. She made such a nuisance of herself that the old men told the younger ones to sit with her. But only three would talk with her.

Leng’ete refused to be discouraged. “I thought, ‘Well, last time I had zero, this time it’s three, that’s not so bad,'” she said.

Gradually, more of the younger men came to talk with her, she said, and gradually the topics expanded — from HIV prevention to teenage pregnancy and its health complications, to early marriage, to school attrition and, finally, to the cut.

“At first, I thought that what she was saying was utter nonsense, and I did not even give it a second thought,” said Meritei, who was one of her earliest allies. She won him over by talking about the physical consequences of the practice.

“Her understanding of the medical conditions convinced me,” he said — even to the detriment of his social stature. “My friends wondered if I was bewitched, that I allowed myself to be carried away by such nonsense,” he added.

Making an example of herself and all she had accomplished, Leng’ete convinced the younger men that cutting wasn’t good for the community, and she turned them into backchannel diplomats, who helped persuade the elders.

Finally, after nearly four years of dialogue, the elders in her village changed hundreds of years of culture and abandoned cutting. She had persuaded the men, and with them the village, that everyone would be healthier and wealthier if girls stayed in school, married later and gave birth without the complications cutting can create.

She and the elders planned a different kind of ceremony to celebrate girls, and the next year, the number of girls in school soared. The elders recognized Leng’ete’s work with a thing of great power — an esiere, a black walking stick that symbolizes leadership.

“You can command people with that stick,” she said, beaming.

Her campaign spread to neighboring villages and eventually to the highest seat of Maasai power, the elders council that convenes at the foot of Mount Kilimanjaro. Leng’ete — whose neighbors wouldn’t speak to her because she wasn’t cut — became the first woman in history to address the elders at the mountain.

In 2014, they changed the centuries-old oral constitution that rules over 1.5 million Maasai in Kenya and in Tanzania, and formally abandoned female genital cutting.

In pushing to overturn a cultural commandment, she found that her own cultural pride was her strongest argument.

“It’s just the cut that’s wrong,” she said. “All the other things — the blessings, putting on the traditional clothes, dancing, all that — that’s beautiful. But whatever is harmful, whatever brings pain, whatever takes away the dreams of our girls — let’s just do away with that.” In December, Maasai beauty was on full display in Lenkisem, a remote village that held an “alternative rites of passage” program. Leng’ete now works for Amref, the health organization, and planning these rites of passage is her full-time job. More than 450 girls walked dozens of miles to the village, where they wrote the songs and invented the dances they performed for 1,000 people.

Before the ceremony, they spent two days learning about sexual health and adolescent development, lofty words for helping girls understand their bodies without fear. This requires undoing generations of rumors about the clitoris: That it makes you dirty. That it turns you into a prostitute. That you can’t have a baby. That if you don’t cut it off, it will grow as big as your ears.

The hard work comes at home, when girls resist their parents — in particular, their fathers. The Maasai community is strongly patriarchal, and fathers have final authority over the household, where disobedience is usually unimaginable.

Shiluni Shirim, 12, is an ambassador for the program. She remembered fighting with her family, even after last year’s program, to keep them from cutting her.

“They were saying, ‘You’re not a real woman,’ and I was saying, ‘I will still be a real woman one day,'” finishing school, marrying and having children, in her own time, she said.

Shiluni began giving speeches in her community, and she was so good at it that the head of Amref invited her and her family to Nairobi. The opportunity that her talent and hard work had created overcame her family’s objections, she said.

“My dad was so proud,” she said. “He said he would never get to go to a CEOs office in his life, but I made it so we could go.”

“When he came home, he was my biggest defender,” she remembered. “I was safe because he set me free.”