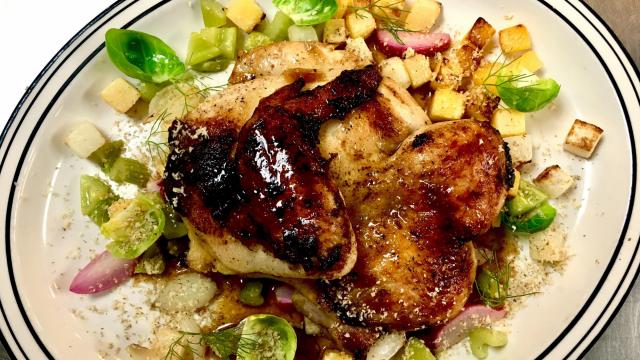 Tommy Stann has decades of experience — in horticulture, cooking and barbecue. After spending 20 years in the landscaping industry, Stann found an unexpected passion for one of North Carolina's culinary staples: wood-roasted barbecue.

"I had a customer in Chapel Hill who had two pig cookers in his barn. I saw them and had no idea what they were, so when he got home from work, I just bombarded him with 50 questions on these grills with wheels," Stann said. "He said, 'I can tell you're interested. I'm cooking barbecue chickens next weekend for my wife's Elon College graduates. Would you like to come help?'"

After his first experience with barbecuing went so well, Stann bought his very own and started serving up food at the Wooden Nickel Pub in Hillsborough. With a flame ignited for cooking and the financial crisis of 2008 severely limiting his landscaping options, Stann decided to go all in on his new venture. Eventually, word of his cooking spread, popularity grew, and Stann was able to establish his own restaurant — the now regionally renowned Hillsborough BBQ.

Starting a new restaurant can, of course, be a risky endeavour. For Stann, the farms and other local businesses surrounding Hillsborough were a major motivator and a large part of the reason his food has garnered so much praise.

"We're blessed by having a sawmill three miles away, so I actually get to go out and handpick all of the wood we use for cooking. If we didn't have that, honestly, I don't know if we would've opened," Stann said. "We also use a lot of Hillsborough farms for our eggs, and we go through a lot of eggs for our salads, our corn pudding and our banana pudding mix we make from scratch. We also use McAdams Farms for our produce, so we're able to have fried green tomatoes six months out of the year in the growing season and red tomatoes for our salads and all of our po' boy sandwiches."

While local ingredients have been a boon for Hillsborough BBQ's dishes, the real magic comes with Stann's long-tested barbecuing technique.

In the beginning, Stann and his team practiced the Eastern North Carolina style, roasting the whole hog all at once, but often ended up serving the lunch crowds with leftovers from the night before, which, for Stann, was unacceptable. In an effort to keep their barbecue as freshly made as possible, Stann transitioned to a more western style, roasting around five pounds of pork butts at a time — a system that has proven to offer more consistency to their dishes.

Barbecue is always on the menu, but it's far from the only highlight. Using a variety of local ingredients, Hillsborough BBQ's nachos are one of the restaurant's most popular offerings. The secret? According to Stann, it's all due to the homemade cheese sauce, mixed up using fresh, local milk courtesy of nearby Maple View Farm.

While Hillsborough BBQ was one of the first restaurants to put the town on the map, it's been followed by a diverse array of other fine eateries. Since Stann opened his doors, other popular spots like Panciuto — operated by multiple James Beard Award nominee Aaron Vandemark, have taken over Downtown Hillsborough, transforming the town into a culinary destination that rivals the food scene of larger cities in the Triangle region.

With this newly established reputation, the restaurants in Hillsborough have played a large part in attracting more traffic to the town.

"We have a regular crowd that we see all the time, but what fascinates me is how many people from outside the area make the trek here, coming to Hillsborough from 45 minutes to an hour away. It's really cool when they say, 'Hey, we came because of Hillsborough BBQ, but we're going to check out the museum' or 'We're going to check out Riverwalk while we're here,'" Stann said. "To think Hillsborough has a specialty food scene like this already is amazing. I understand how Chapel Hill, Durham and Raleigh can get away with it, with the numbers of people that they have, but the food scene of Hillsborough has changed so much since we opened, and I think it's been for the better."

Stann may not have always welcomed this change with open arms, but now that the years have passed and he's seen the effects firstand, he understands growth is essential. Instead of focusing his efforts on expanding, he wants to perfect what he's already doing and is working on increasing sustainability and bringing attention to causes close to his heart. In fact, Hillsborough BBQ was the first place in town to start composting all of their food.

For Stann, he hopes to spread that influence and help other local restaurants grow in the process.

"Since we opened, there have been a bunch of other restaurants opening too. Actually, we're getting ready to have a pizza joint, Napoli's, open next door. The old Tommy from nine years ago would not have wanted the competition," Stann admitted. "But I've met the owners, and I know their pizza because they have a food truck and a place in Durham and Carrboro. I realized that we have the chance to make this spot a cool destination for two great restaurants. They're going to bring people in that potentially have never been to our place and vice versa."

Stann added, "More is better now, and I think that's what Hillsborough is turning into."