In Her New Book, Michelle Obama Denounces Trump’s Sexism and His Promotion of the ‘Birther’ Conspiracy 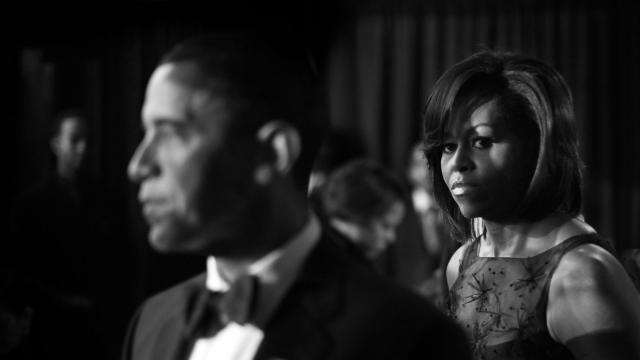 In her highly anticipated memoir, “Becoming,” former first lady Michelle Obama mostly sticks to her long-stated principle of staying positive in the face of political and personal attacks: “When they go low, we go high.”

But she doesn’t hold back entirely. Obama denounces President Donald Trump for his sexism and misogyny and, most forcefully, for his part in promoting the “birther” conspiracy theory that questioned Barack Obama’s citizenship.

She described his campaign to discredit her husband as “crazy and meanspirited, of course, its underlying bigotry and xenophobia hardly concealed,” as well as dangerous. “Donald Trump, with his loud and reckless innuendos, was putting my family’s safety at risk. And for this I’d never forgive him.”

“Becoming,” which is due out Tuesday, from Crown, is shaping up to be one of the year’s biggest blockbusters, with a global first printing of 3 million copies, and a worldwide release in 31 languages.

The memoir is landing at a moment when the former president and first lady have returned to public life after mostly laying low in the months following the 2016 election. Barack Obama campaigned energetically for Democratic candidates in the midterms, and Michelle Obama has launched a new education project for adolescent girls and an initiative to promote voter registration and turnout. Now, she is about to travel the country on a 10-city book tour organized by Live Nation, the world’s largest concert promoter. At promotional events in New York, Chicago, Los Angeles, Boston and elsewhere, Obama will appear at sports stadiums with high profile moderators like Oprah Winfrey, Sarah Jessica Parker, Reese Witherspoon and Valerie Jarrett. (In some venues, front row seats with a “meet and greet” package are priced at $3,000; 10 percent of the tickets in each city are being given away to local charities, schools, and community groups.)

With the publication of “Becoming,” the Obamas now seem set to make their mark not just in politics, but in popular culture. Last year, they announced a joint book deal with Penguin Random House that was rumored to exceed $60 million, a large portion of which is going to their foundation and other charities. This year, they signed a multiyear production deal with Netflix, to produce films and television shows through their company, “Higher Ground Productions.” (They recently acquired screen rights to Michael Lewis’ new book, “The Fifth Risk,” for their company.)

“Becoming,” which The New York Times received a copy of, is in many ways a fairly conventional first lady’s memoir: An insider’s view of what it was like to live through national tragedies and other major events, in one of the most high profile positions in the world. She describes the highs and lows of her husband’s eight years in office, like learning the gutting news of the Sandy Hook massacre in Newtown, Connecticut, and how her husband summoned her to his side for comfort, something he rarely did during work hours, and the moment he told her that the mission to kill Osama bin Laden was successful.

But as the first African-American first lady, Obama’s experience was far from typical, and she writes about feeling greater scrutiny than her predecessors.

“I was humbled and excited to be first lady, but not for one second did I think I’d be sliding into some glamorous, easy role,” she writes. “Nobody who has the words “first” and “black” attached to them ever would.”

She describes wanting to protect her daughters from the glare of public life, and recounts her difficulties becoming pregnant and suffering a miscarriage. She reveals, for the first time, that Malia and Sasha were conceived through in vitro fertilization, and describes feeling resentful about administering shots to herself while her husband was away at his job in the state legislature: “None of this was his fault, but it wasn’t equal, either,” she writes.

Despite some revealing passages and an intimate tone (she details her early courtship with Barack Obama, describing a rush of “lust, gratitude, fulfillment, wonder”), Obama, not surprisingly, doesn’t let her guard down entirely, a protective posture that is consistent with her public persona.

Toward the end of the book, Obama takes aim at Trump, denouncing his policies and tenor in sweeping terms.

“I’ve lain awake at night, fuming over what’s come to pass. It’s been distressing to see how the behavior and the political agenda of the current president have caused many Americans to doubt themselves and to doubt and fear one another,” she writes. “I sometimes wonder where the bottom might be.”

After The Washington Post and other outlets published stories about the book’s content, Trump responded Friday. “She got paid a lot of money to write a book and they always expect a little controversy,” Trump said. “I’ll give you a little controversy back, I’ll never forgive [President Barack Obama] for what he did to our U.S. military. It was depleted, and I had to fix it,” Trump said. “What he did to our military made this country very unsafe for you and you and you.”

As for the question that’s likely to come up repeatedly on her book tour, Obama tries to put to rest speculation that she’s gearing up for a career in politics.

“I’ve never been a fan of politics, and my experience over the last 10 years has done little to change that,” she writes. “I continue to be put off by the nastiness.”