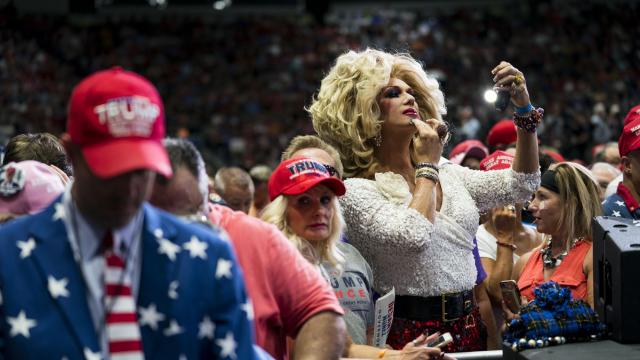 ESTERO, Fla. — With a somber trip to Pittsburgh to visit victims of a synagogue shooting behind him, President Donald Trump flew to one of his favorite places in the world — Florida — on Wednesday to host another one of his high-decibel political rallies.

On Thursday, Trump will be in Missouri. Before the week is out, he will hit West Virginia, Montana and Indiana, all part of an 11-rally blitz leading to the midterm elections Tuesday.

That is fast, even for him.

For Trump, the next five days feature battleground states where the Republican Party’s hold on the House is in peril and come on the heels of a high-profile Twitter slap at Speaker Paul Ryan, who shot down Trump’s latest promise to issue an executive order denying birthright citizenship to people born to immigrants in the country illegally.

At the rally in Florida, the president referred to the citizenship clause in the Constitution as a “crazy policy,” telling a rapt crowd that “illegal immigrants are not subject to the jurisdiction of the United States.” (Legal experts would widely disagree.)

But any intricacies of the Constitution would have to be for another day. On Wednesday, a red-meat menu included attacks on Democrats, immigrants and the news media — the “enemy of the people,” Trump said before pumping up a line of Republicans who are betting on his support to bolster them in razor-thin races.

Trump was here to stump for Gov. Rick Scott, who is mounting a challenge against incumbent Sen. Bill Nelson, and for Ron DeSantis, a former Republican congressman facing a tight governor’s race against Andrew Gillum, the Democratic mayor of Tallahassee. On Twitter, Trump has accused Gillum of running one of the most “corrupt” cities in the United States, a point DeSantis himself tried to hammer home onstage.

“I’m the only guy,” DeSantis said, “who can credibly say I’m not under investigation for corruption.”

The crowd responded with a chant tailored for Gillum, who has struggled amid investigations into his connections with a lobbyist tied to an FBI investigation, and accepting gifts from an undercover agent: “Lock Him Up.”

Along with denouncing Democrats and journalists, Trump — and the candidates who model themselves in his image — has made immigration, and fears about it, the cornerstone of efforts to animate Floridians to vote for Republicans.

“Andrew Gillum wants to throw open your borders to gang members, human traffickers and criminal aliens,” Trump said. Gillum has said that Florida should never become a “show me your papers” state.

The president also moved to reiterate earlier promises that include securing the southwest border; issuing an oft-repeated $1.6 billion update on the border wall; pledging an end to birthright citizenship; and unleashing a diatribe against the groups of migrants making their way north to the United States’ southwestern border.

“A vote for Democrat is a vote to liquidate America’s borders,” Trump said.

“They’ve got a lot of rough people in those caravans,” he added. “They are not angels.”

Trump has often relied on inflated or misleading claims to bolster his immigration arguments: The Marshall Project, in a 2018 analysis of data from 200 metropolitan areas over the past few decades, found that crime has fallen despite the immigrant population increasing. Other studies have found that immigration has little effect on crime.

After a day of mixing taunting tweets with staying on message, Trump seemed eager to shed his presidential costume for his campaign firebrand one. (At the end of a workforce development event fielding questions from Larry Kudlow, his economic adviser, earlier Wednesday, Trump tossed the microphone on the floor and left the room. A new campaign message appeared on his Twitter account minutes later.)

At the rally, the president, as he usually does, took issue with how journalists covered his latest activities, but as midterm elections loom, Trump seemed to intensify his attacks, taking his “enemy of the people” complaint from his Twitter account to the rally stage. He said he was disheartened to come home and see how his visit to Pittsburgh was covered — the trip drew protests and was skipped by several congressional leaders.

“They did everything in their power to try to play it up and push people apart,” Trump said of the news media. “That’s what’s happening.”

The crowdgoers, who had spent hours listening to muscle-car songs — including “Eye of the Tiger” and “YMCA” played at a throat-rattling volume — went crazy, generating a hearty round of “CNN sucks” chants.

Trump momentarily stopped: “It’s not about me,” the president said. “It’s about you.”

He delivered his latest pitch on Halloween, but aside from the occasional wandering colonial patriot or bearded Superman pecking away at his phone, there was only one consistent get-up: the “Make America Great Again” uniform.

And the call-and-response the president enjoys with his supporters was on full display.

“Then what the hell am I doing here today?” Trump asked. A standing ovation followed.

Outside the Hertz Arena, a venue of about 8,200 near a strip mall, the mood was festive. Several attendees chattered about the 14th Amendment and delivered a round of immigration-specific chants — “Build the wall! Deport them all!” one man shouted.

Inside, hundreds of attendees milled about in front of the stage amid signs that read, in capital letters, “Finish the wall.” Deja Walker, 20, who works in sales and hosts her own political podcast, said that she disagreed with the way migrants were making their way north in groups, and with the Constitution’s provisions for people born in the United States.

“At the end of the day, I come from a family of immigrants, and I don’t support people being able to take advantage of the country,” said Walker, who is Colombian. “You don’t get to hop the border and break our laws.”

At least one person dressed up as an undecided voter. Hunter Kufta, 24, a cashier at Publix, said that he had attended Gillum’s political rally the previous evening and that he was generally pleased with the candidate’s performance. Kufta voted for Trump in the 2016 presidential election, but said he was wavering over his vote this time. He said that he supports two disabled parents on Medicare, and that he wanted to hear more from both candidates about how he could help keep his family afloat.

“This is kind of hard,” Kufta said. “Obviously, I understand that we all can’t have free health care. But we have to have affordable health care.”

Democrats are hopeful that voters like Kufta, who supports Trump’s immigration policies, will be won over by their focus on health care. The president has promised that people with pre-existing conditions will always be protected by Republican health care policies, which include efforts to repeal the Affordable Care Act.

At the rally, Trump kept his comments about health care largely to claims that he would protect Medicare.

Kufta, for his part, said he left the event with mixed feelings — support for Trump except for his “hatred toward the media,” and turned off by DeSantis’ behavior. When it comes to health care, Kufta said neither Republicans nor Democrats had presented viable options.

“Gillum still for governor,” he said of his intended vote. But Kufta said he planned to back Scott for Senate.