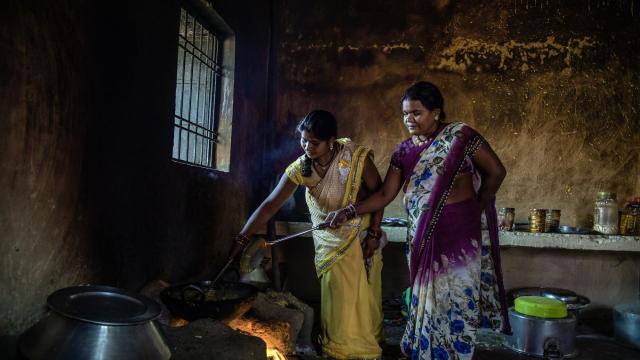 RAIPUR, India — Forget the old American campaign slogan of a chicken in every pot, or the Indian politician’s common pledge to put rice in every bowl.

Here in the state of Chhattisgarh, the chief minister, Raman Singh, has promised a smartphone in every home — and he is using the government-issued devices to reach voters as he campaigns in legislative elections that conclude Tuesday.

Chain Sahu, a mother of two who cooks at a school on the outskirts of Singh’s district in Rajnandgaon, said her free phone rang last Sunday, just before her village voted. The caller, who claimed to be from “the Raman government,” asked if she had benefited from government programs and urged her to vote for Singh’s Bharatiya Janata Party. When she complained about her pay and work conditions, she recalled, “They said, ‘We’ll carry your concerns to Raman.'”

The phones are the latest twist in digital campaigning by the BJP, which controls the national and state government and is deft at using tools like WhatsApp groups and Facebook posts to influence voters. The BJP government in Rajasthan, which holds state elections next month, is also subsidizing phones and data plans for residents, and party leaders are considering extending the model to other states.

Chhattisgarh’s $71 million free-phone program — known by the acronym SKY after its name in Hindi — is supposed to bridge the digital divide in this state of 26 million people, which is covered by large patches of forest and counts 7,000 villages that do not even have a wireless data signal. The plan is to add hundreds of cellphone towers and give a basic smartphone to every college student and one woman in every household to connect more families to the internet and help fulfill the central government’s goal of a “Digital India.”

But this election season, many of the 2.9 million people who have received the phones have found themselves targeted by the BJP.

Working out of a government-owned building near the capital, about 350 contractors, originally hired by the state but now paid by the BJP, have been calling people who received the phones. Reading from a script that pops up on their screens, the callers ask the recipients if they are happy with the device and the mobile service, and also poll them on their satisfaction with other government programs championed by Singh.

The callers then ask people whether they plan to vote and which party they intend to vote for, according to half a dozen people who made or received the calls.

The state BJP uses the data to steer party activists to visit voters who said they intended to vote for the opposition Indian National Congress or abstain, according to a longtime BJP worker briefed on the strategy. “They are misusing state machinery for personal gains,” said the worker, who requested anonymity before discussing confidential party matters. “When we are in the government and have done so well, why do we need to do this?”

The phones themselves also actively promote Singh, who has run the state for 15 years and is seeking a fourth term.

His smiling face is set as the background image on the home screen, prompting some to nickname it the “Raman mobile.”

The phones come loaded with two campaign apps: one for Singh that features his news releases and speeches, and a similar one for Narendra Modi, India’s prime minister, who also hails from the BJP and is up for re-election next year. When phone users first open the apps, they are asked to grant full access to contacts and to share other personal information with the BJP.

The Congress Party has filed complaints about the BJP’s tactics to the Election Commission of India, arguing that if the state is giving one party access to the database of phone recipients, other parties should also be given the data. Congress officials also accused the call-center operator, Magnum Group, of violating laws that prohibit election work by the government.

Subrat Sahoo, chief electoral officer for the state, said in an interview Saturday that the BJP’s use of Magnum to make calls was legal as long as the party paid the bills. But he said that commission officials in New Delhi were examining whether the BJP was given improper access to the list of phone recipients. Sahoo wrote the Chhattisgarh agency in charge of the data on Nov. 1 and told it not to share it.

Sunil Soni, a BJP vice president in Chhattisgarh, said that the phone program was intended to help the poor in this central Indian state, where settlements sometimes consist of just a few homes and roads are often just a single lane. “Those who are too poor to buy a mobile must not be kept out of development,” he said. He added that there was nothing wrong with urging people to vote, which Magnum and many other entities were doing.

Magnum, an Indian outsourcing firm that does call-center work for both private companies and government agencies, has ties to Singh’s government and the free-phone program, which is formally known as Sanchar Kranti Yojana. In September 2017, the state hired Magnum to survey residents on their overall satisfaction with government programs. The company leased space in a state building and opened a new call center to handle the work. At the televised ribbon-cutting, Singh donned a headset to make one of the first survey calls.

After the SKY program was started in July, the phones’ manufacturer, Micromax, hired Magnum to manage customer service. Separately, the state asked the company to interview about 200,000 recipients about the quality of the SKY phones and the service.

The state-paid research stopped about two months ago to comply with routine Indian pre-election rules that forbid the use of government resources to promote a political party. “At the present time, we are calling on behalf of the BJP party,” Qadir Baksh, deputy manager for operations at the Magnum call center, said in a brief interview in the lobby Friday. “I cannot disclose the questions we ask of the people to you.”

In a follow-up phone interview, Syed Adil Hussain, Magnum’s chief executive, acknowledged that there was now political activity occurring at the call center, which is in a tree-lined, manicured district near the airport.

Hussain said that a single client had hired the entire call center after the state stopped its surveys. He said that the deal had been struck by his boss, the company’s managing director, and he claimed not to know the identity of the client or the specifics of the contract. “We have rented out the manpower and the infrastructure to another company,” he said. “How and what they are doing is not my business.”

Alex Paul Menon, chief executive of the Chhattisgarh Infotech Promotion Society, which runs the SKY program, said India was keen to spread digital literacy. In a state like Chhattisgarh, where simple access was a problem, mobile phones were an obvious first step. In 2016, Menon’s agency began to seek a mobile carrier to build towers in sparsely populated areas.

The contract, which will be worth more than $100 million when completed, went to Reliance Jio, a fast-growing carrier run by a billionaire supporter of Modi, Mukesh Ambani, and to Micromax, a financially struggling Indian phone maker. The first batch of phones, which each cost the state about 2,500 rupees, or $35, was distributed over the summer.

“It’s not like someone woke up this morning and said, ‘Oh, this is going to get votes,'” Menon said. “It’s nation building.” He said his agency kept a tight leash on user data and had not shared it with anyone.

Menon said a committee of top state officials was appointed earlier this year to choose apps for the phone and decided to load the Singh and Modi political apps along with government apps that help users tap national and state services.

The state says that its research shows that customers are using the phones to speak with family members, surf the web and send WhatsApp messages. But about a dozen recipients interviewed last week in Rajnandgaon said they were barely using the phones. They complained of poor battery life, apps that crash, and a tiny monthly allocation of free data — concerns that also popped up in the state surveys conducted through October. Micromax and Jio said no one was available to answer questions about the program. Sahu and her fellow cooks at the village school said that rather than spend millions of dollars on phones that do not work, the government should raise their daily wage of 40 rupees, about 56 cents, and give the school a gas stove so they do not have to cook over a smoky wood fire.

Standing at the door of the school kitchen clad in a purple sari, Sahu said that when she got the phone call urging her to vote for the BJP, she gave a quick response over the scratchy line: “I told them, ‘You should raise our income or we will not vote.'”