On Nov. 7, Wake County voters will be asked to weigh in on one of the biggest decisions in the county's history: a $970 million school construction bond package that public school system leaders have said is needed to help accommodate a booming student population.

The bond package would allow for 17 new schools to open between 2008 and 2011, major renovations at 13 existing schools and about 100 repair jobs. It would also help cover six new ninth-grade centers to ease overcrowding at high schools and buy land to build 13 additional schools from 2011 to 2013.

More than 128,000 students are enrolled in the Wake County Public School System for the 2006-2007 school year -- an increase of 7,556 students from the previous year -- putting it on track to become the largest school system in North Carolina.

Projections add about 40,000 more students in the next five years.

Growth is the driving force behind overcrowding. Every day, more than 60 people move to Wake County. In Raleigh alone, about 12,000 people move in each year, making it one of the nation's fastest-growing cities.

More people means more students, and Wake County school leaders have said they are running out of classroom space and out of time.

For example, at Pleasant Union Elementary School in Raleigh, an art room and a teacher's lounge are now classrooms. The art teacher holds class in the cafeteria.

The school's building capacity -- the number of students that can be accommodated in the permanent brick-and-mortar building -- is about 540 students. The school is currently 200 students over capacity.

"We try to come up with the best possible way to meet the needs of the school, and right now, our need is capacity," said Rosa Gill, vice chairwoman of the Wake County Board of Education.

This year, the school system unveiled one of its largest student reassignment plans ever and also approved the conversion of 19 elementary schools and three middle schools to a mandatory year-round class schedule.

That year-round change takes place beginning with the 2007-2008 school year, putting more than 40 of the school system's 150 schools on a year-round schedule.

Year-round schedules, according to school officials, can accommodate 33 percent more students, because students operate on four rotating schedules. All students go to school the traditional 180 days, but only three groups are in class at a time.

School leaders have said these measures help the student population issue, but do not solve it. Ultimately, they believe more schools and renovations are needed. 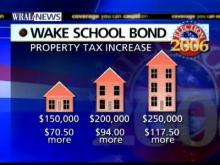 School system leaders say the $970 million bond is the best and quickest way to start building schools because the funding would be available immediately.

"The best way for us to build the facilities we need -- and paying for it -- is to have this bond pass," Wake County Board of Education Chairwoman Patti Head said.

Opponents have said there are alternative solutions, such as: more charter schools, lower bond amounts and public-private partnerships. But school leaders have argued that those alternatives are not immediate enough. And voting down the bond would likely mean switching more schools to a year-round schedule, Head said.

"The best answer is to vote for these bonds so we can maintain some choice as we move forward," she said.

For example, many parents have vowed to vote against the bond because they are against mandatory year-round schools. They argue that year-round schools will complicate their lives by having children on different school calendars and could potentially split families.

"It is definitely worth voting against this bond on moral and ethical principles for folks opposed to mandatory year-round (calendars)," said Dave Duncan with Stop Mandatory Year Round.

Residents who don't want a property tax increase are fighting the bond. If the bond passes, for example, the owner of a $150,000 home would pay about $70.50 more in taxes a year.

Groups such as Americans for Prosperity and Wake Citizens for a Quality Education believe that by voting against the bond, it will force the school system to consider other alternatives, such as using private-public partnerships -- in which a private developer builds schools and the school system leases the buildings. 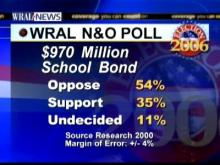 In a recent WRAL-TV/News & Observer poll conducted by an independent polling company, Wake County voters said the taxes are too high and the incentives too low to support the upcoming vote. The results have a margin of error of plus or minus 4 percent.

In a random sampling of voters, 54 percent opposed the bond, 35 percent supported it, and 11 percent were undecided.

In a recent WRAL-TV/News & Observer poll, more than 50 percent of respondents said they oppose the school construction bond.

When asked about the solution to school growth, 53 percent of the group opposed to the bond said to avoid taxes, no matter how many schools would be converted to mandatory year-round schools.

Forty-seven percent of voters with children in Wake County public schools said they would also rather avoid taxes and take a mandatory year-round schedule.

"Any poll is a snapshot," said Wake County school Superintendent Del Burns. "It's a moment in time, and obviously this gives us pause. We have to be concerned about it, but there's still two weeks until the vote and during the two weeks, quite a bit can happen."

Both supporters and opponents of the $970 million bond seem to agree that student population growth is inevitable. With all the arguments for and against the bond, there is no clear answer as to what would happen if it fails.

The Wake County Board of Commissioners could finance about $625 million in construction costs with what are called Certificates of Participation. Those are available at a higher interest rate than general obligation bonds. That funding would then be allocated to the school system at about $60 million a year for the next 10 years.

Some opponents, such as Americans for Prosperity, want county commissioners to propose a smaller bond of about $650 million that does not raise taxes.

Like Head, many school board members think a failed bond would likely mean less money and more year-round schools.

County commission Chairman Tony Gurley believes no one can assume what will happen if the bond fails.

"People should not be making any assumptions about what would happen," Gurley said.

Voters will decide on Nov. 7.
SUGGEST A CORRECTION