In Courting New Liberals, Pelosi Runs a Risk: A Freedom Caucus of the Left 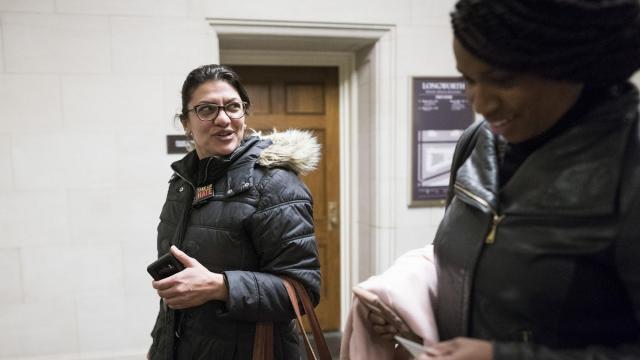 WASHINGTON — When Rashida Tlaib, a newly elected Democrat from Michigan and favorite of the liberal left, met privately last week with Rep. Nancy Pelosi, who was seeking her vote for speaker, Tlaib pointedly demanded an end to “the old culture of waiting your turn.”

Taking aim at the seniority system that Pelosi used to climb the ranks of the House, Tlaib pressed the would-be speaker from California to give progressive newcomers coveted seats on powerful committees like Appropriations and Ways and Means — spots usually reserved for veterans. Tlaib, who once said she would “probably not” vote for Pelosi, appears headed to do so when Democrats elect their leaders on Wednesday, one member of a crew of boisterous young liberals who have become shock troops in Pelosi’s leadership battle.

But by empowering newcomers like Ayanna Pressley of Massachusetts, Jahana Hayes of Connecticut, Alexandria Ocasio-Cortez of New York, Ilhan Omar of Minnesota and Tlaib, Pelosi risks creating a headache for herself down the road: a Democratic version of the House Freedom Caucus, the far-right group that consistently defies Republican leadership, making life difficult for House Speaker Paul Ryan.

With Pelosi in their debt, the potential speaker may be giving voice to their dissatisfaction with mainstream Democrats, emboldening them as tensions between their midterm campaigns and the party establishment linger. In a closed-door meeting with the incoming freshman Democrats on Tuesday, Pelosi walked a fine line, acknowledging their “idealism, integrity and imagination” while warning of the risks of being intransigent.

“We want to remove all doubt to how we go forward in a way that puts our best foot forward on Day 1, in order to show that we can govern,” she said, according to one person present, adding, “Make your fight, make your case, but not every fight is the last fight.”

Pelosi, however, is a skilled navigator of turbulent waters. During the campaign, she resisted calls from progressives to support the movement to abolish Immigration and Customs Enforcement and pushed back against efforts from the left to engage President Donald Trump tit for tat on divisive issues like immigration.

But after an election in which Democrats made considerable gains in districts won by Trump, the prospect of a crop of outspoken progressives having outsize power and influence in a newly realigned Washington is worrying some of the more pragmatic Democrats, especially those who flipped Republican seats this month.

“For me and for any of the others in these red-to-blue seats, we’re in a position that if we ever want to hold onto these seats — and we’re the ones who delivered the majority — then we have to be able to go back to our districts and show that we’ve accomplished something,” said Katie Hill, an incoming freshman from California, who strongly backs Pelosi.

“If we’re going to be strong as a majority, we need to be cohesive as much as possible,” Hill said. “We can’t be like the Republicans and the Tea Party.” Some of the progressive freshmen already have their own brands, and their own following. Ocasio-Cortez, for instance, has managed to enthrall a new generation of millennials by taking them behind the scenes of freshmen orientation with her lively Instagram account. They contend that they need to have prominent roles because they have brought people into the electorate who were not previously engaged.

And some like Tlaib — who carefully explained her position on Pelosi by saying that “no one is running against her” and that she did not intend to vote for a Republican — have made clear their support may come at a price.

A former community organizer and environmental activist who is one of the first two Muslim women elected to Congress, Tlaib made waves on the first day of freshman orientation when she joined a protest demanding Pelosi give greater powers to a new select committee on climate change. (Unlike Ocasio-Cortez, though, she did not participate in a sit-in at Pelosi’s office.) Her district is among the poorest in Michigan, one where clean air and clean water are everyday concerns.

Tlaib said she had been pushing behind closed doors for Democratic leaders to bar members from serving on the panel if they had taken industry contributions. Apart from that, she wants a seat on the Appropriations Committee.

“Let’s do it differently. Let’s transform this Congress and have it reflect this new class,” she said, recounting her message to Pelosi. “People want to say, ‘Thank you so much, this is great, this is the most diverse class.’ Well, so honor it. Honor it by putting us at the table to make decisions.”

Pressley, who won her seat in Massachusetts after ousting an incumbent Democrat in a primary, used her private meeting with Pelosi to extract a promise that Pelosi would bring up a bill, early in the new Congress, requiring background checks for all gun purchases. Pelosi has also appointed her to a gun violence prevention task force; after she made that commitment, Pressley announced she would support Pelosi for speaker.

“I have lived and campaigned by the mantra that I do not need to ask permission to lead,” she said in a statement.

Hayes, the incoming representative from Connecticut who won after a grueling primary in which the state party backed her opponent, said in an interview that winning as an outsider had freed her from the traditional deference to the party establishment figures. She said she refused two direct requests of support from Pelosi, before announcing her support in a statement on Tuesday.

Like Tlaib, Hayes will back Pelosi because not voting for her “would be voting for a Republican.” While she did not bargain or request specific committee assignments in return, she said Pelosi did commit during their private meeting to addressing calls for a generational shift in leadership.

“I ran because I think we need to make some changes in how our government operates,” Hayes said. “And I’m not so wedded to this seat or a seat in Congress to now begin to compromise the things that I believe in.” Lauren Underwood, an incoming representative from Illinois who backed Pelosi last week, echoed the sentiment. Her advisers still bristle at what they believe was overt mistreatment by the Democratic Congressional Campaign Committee and other party-allied groups during the campaign season. While she said she harbored no ill will, “it is not lost on me that I was not their top choice.”

With the arrival of so many new freshmen, membership in the Congressional Progressive Caucus has jumped to more than 90 from 78, accounting for more than one-third of all House Democrats, according to progressive caucus officials. The caucus, like the newest members, is also flexing its muscles, and has extracted a promise from Pelosi that progressives will have proportional representation on House committees.

One test of the progressives’ newfound clout may come in Wednesday’s race for leader of the House Democratic Caucus. Rep. Barbara Lee of California, a favorite of the progressives, is running against Rep. Hakeem Jeffries of New York in a contest that seems too close to call. Lee has drawn support from outside groups like Move On and the Progressive Change Campaign Committee, which have also backed many of the candidates on the liberal left. In her announcement pressing for Pelosi, Pressley pointedly noted that she also supported Lee.

Will Levitt, a co-founder of Square One Politics, the political consulting firm that has advised several freshman Democrats, including Underwood, said the new members were serving notice to the Democratic Party, and the party would be wise to recognize that the young progressives can be useful allies.

“Of course focusing on supporting women and people of color and LGBT candidates feels like the right thing to do,” Levitt said. “But it also happens to be the strategic thing to do for the party — these are the future leaders. These are the people who folks across the country are psyched about.”