In California, Houses Burned. So Did the Toxic Chemicals They Contained. 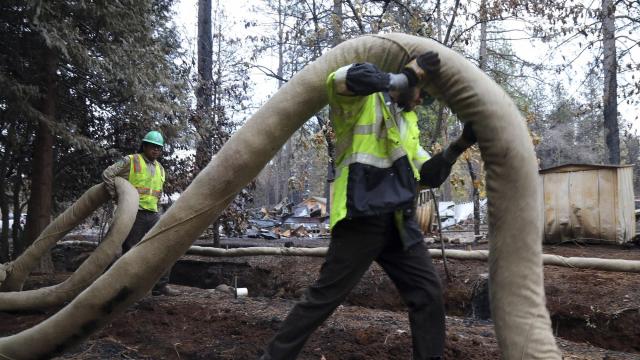 PARADISE, Calif. — The long, laborious process of returning Paradise and neighboring towns to a safe state will begin next month when crews in masks, Tyvek suits and booties begin combing through every last property in this town that was decimated by wildfire. Their targets are things like burned bottles of bleach, melted cans of paint, and corroded car batteries, which will be tagged and removed.

Next, they will test the surrounding soil and, if needed, scrape away layers to get to clean earth, free from oil and gasoline. “You’d be surprised how much of that stuff survives a fire,” said Adam W. Palmer, an environmental scientist with the California Department of Toxic Substances Control who is helping lead the cleanup.

In the charred footprint of each home in Paradise lurks an invisible and dangerous legacy of the Camp Fire: toxic chemicals released by the blaze. There may be radioactive isotopes from burned-up antique crockware, cupboards of incinerated household cleaners, and asbestos from old siding. Heavy metals, chemicals and biological contaminants left behind demand a cleanup of extraordinary scale, before any permanent return to Paradise is safe.

Only once the properties have received official signoff that they have been cleansed can residents begin rebuilding. The task will take time; cleanup is still not finished in the aftermath of the Tubbs Fire, which scorched Sonoma, Napa Valley and other parts of Northern California over a year ago. The Camp Fire destroyed more than three times as many buildings than did the Tubbs Fire.

“It’s a god-awful mess; there is just such a long list of hazardous materials that are partially burned and scattered about in the debris after a fire,” said Dr. Gina Solomon, a professor at University of California, San Francisco, who studies the effect of chemicals on health.

As of now, return remains too dangerous. At the Red Cross shelter at the Butte County Fairgrounds in nearby Gridley, organizers have held off distributing the free tool kits — a shovel, a pair of gloves, a dust mask — they typically give to victims to help dig through the ruins for items that might have been spared, at the local government’s request, said Steve Walsh, a spokesman.

“There is still too much risk to go looking for your wedding ring,” he said.

Experts say the risk posed by contamination stands to grow in scope as wildfires happen more frequently in California. As the fires burn up homes, they also release the components of modern daily life into the ground, water and atmosphere.

“People focus on the immediate effects of a fire, which are tragic and important,” Solomon said. “But there are all kinds of ripple effects that flow from these events, ranging from the enormous respiratory and cardiac effects from the plumes of smoke, and all the way to the aftermath of the toxic chemicals that are left behind.”

Contamination has slowed recovery. Huddled in messy shelters at local fairgrounds, or holed up in motels, thousands of residents are anxious to start sifting through what is left of their town, but officials say they cannot reopen until the areas are made safer.

“When can I go home?” asked Gregory Ghica, at a recent disaster relief meeting at the Silver Dollar Fairground in Chico. His house was spared, but no date has been set for when Paradise might be safe to re-enter. “I should be happy, but I have slept in six different beds,” Ghica said. “When? When?”

Over 200 people are still declared missing, and search crews are combing the area looking for remains, slowing the ability of cleaning crews to enter. Hazardous material removal teams from the California Department of Toxic Substances Control, in conjunction with other state and federal agencies, will begin the process of clearing out the most dangerous toxic materials Monday.

Even then, it will be a long time until the area is deemed safe.

Many of the homes in Paradise were older, with roofs that may have been shingled in asbestos, filled with treated wood that can release arsenic and chromium when burned. An incinerated television can expose heavy metals such as cadmium and lead. Even seemingly innocuous items, such as collectible antique Fiestaware crockery, may contain radioactive uranium. Mercury can leak from old thermometers.

“We understand the desire to physically go and see if their home or property is gone,” said Lisa Almaguer, spokeswoman for Butte County Public Heath. “But if the breeze comes through and that ash and debris blow through that window and doors and gets on your clothes — it’s a health and safety issue.”

The agency has issued a hazard warning for residents not to live on or camp out in their destroyed property, even once the town is reopened.

“That ash could contain a lot of toxic hazards,” said Linda Smith, chief of the health and exposure assessment branch of the California Air Resources Board. Risks from exposure to various chemicals found at burn sites range from acute reactions to more serious, long-term problems, with much unknown. “Even a few fibers of asbestos could be a health impact,” Smith said. “We don’t know the magnitude of the contamination that was produced in this urban burning, because it was unprecedented,” said Jackson Webster, a professor who studies wildfires’ impact on water systems at California State University in Chico, a town near Paradise.

On a recent evening, Webster stood on the blackened banks of Butte Creek, scooping up sample jugs of water. He is part of a project with a consortium of universities studying the contaminants that wildfires release into the watershed. Of particular concern, he said, was the site of this fire: Paradise sits in the foothills of the Sierra Nevada, where cities as far away as Los Angeles get their water.

“That landscape is the landscape that provides high-quality drinking water for the rest of the state,” Webster said.

Crews are currently installing wattles — bundles of straw — along water bodies in an attempt to block the seepage of contaminants. But with recent rains, many chemicals are still flowing and the cleanup work has become even more challenging.