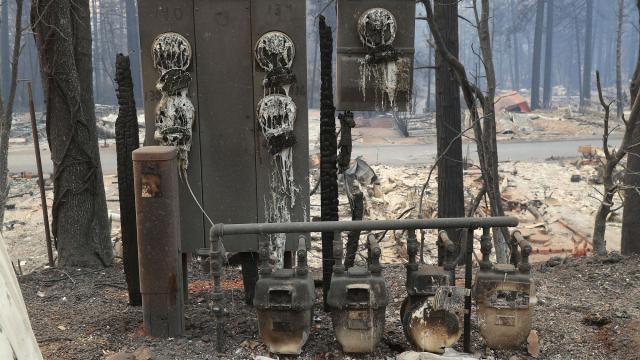 PARADISE, Calif. — Search teams were scouring the devastated town of Paradise on Tuesday with the grim expectation of finding more bodies in the aftermath of the deadliest wildfire in California history.

Finding remains is a painstaking process that is often guided by cadaver dogs after an intense fire like the one that struck Paradise and surrounding areas, where at least 48 people have been killed, about 200 are still missing and much is reduced to ashes. Coroners and dozens of other searchers have fanned out across the area, and two portable morgues are waiting to collect the dead.

The Camp Fire, as the blaze that ripped through Paradise is known, is only about 35 percent contained, and has burned 130,000 acres. It continues to rage in the hills and ravines east of the city of Chico.

“There are potentially over 100 people that were killed in Butte,” Thom Porter, a Cal Fire chief, said late Tuesday at a meeting for evacuees, speaking about Butte County.

It is also the most destructive wildfire in California history, with more than 8,800 structures destroyed, most of them homes.

Two other wildfires continue to burn in Southern California. Two people have died in the Woolsey Fire, which is burning west of Los Angeles and has swept through parts of Malibu. The fire is 40 percent contained and has charred more than 97,000 acres, but firefighters believed they were “getting the upper hand.”

A third fire, the Hill Fire in Ventura County, has been kept to about 4,500 acres and is 90 percent contained.

With winds gusting up to 86 mph in San Diego County on Tuesday and a red-flag fire warning in effect, a utility company turned off electric power in some areas, and at least five school districts canceled classes. Around 25,000 customers in the county were without power, either from precautionary shutdowns or from losses caused by heavy winds.

Smoke still rose on Tuesday from tree stumps in the evergreen forests that run through Paradise. A number of homes were untouched by flames that first swept into the town on Thursday, but they were the exceptions.

Typical of the destruction was Yorktown Manor, a cul-de-sac where only two of a dozen homes were still standing. The kick drum of a child’s drum set, strewn incongruously in the driveway, was one of only a few clues of who lived in now incinerated homes.

Paradise had a population of 27,000 before the fire, including many retirees but also families with children seeking a reprieve from the crippling costs that have made many California cities unaffordable.

Under mandatory evacuation since the fire, Paradise is now emptied of its residents. The streets are quiet, flecked by the ash that falls like snowflakes.

The sparse traffic on Tuesday included emergency vehicles and trucks from the electric utility. But there were signs of the grim search underway, black hearses traveling to and from the main hospital, their hazard lights flashing through the smoke haze.

Josh Bischof, an operations section chief for the state’s firefighting agency, Cal Fire, said Tuesday morning that crews were making progress on containing the fire and keeping it away from populated areas.

“Winds are decreasing,” said Jim Mathews, a forecaster with the National Weather Service in Sacramento. “But conditions are still dry.”

On Tuesday night, Sheriff Kory L. Honea of Butte County announced that the remains of six more people have been discovered, increasing the death toll from the Camp Fire to 48.

Authorities have released the names of three people who were killed: Ernest Foss, 65, from Paradise; Jesus Fernandez, 48, from Concow; and Carl Wiley, 77, from Magalia.

The death toll in the Camp Fire surpassed the Griffith Park Fire of 1933, which killed 29 people and for decades had held the infamous distinction of being California’s deadliest wildfire.

Firefighters ‘Getting the Upper Hand’ on the Woolsey Fire

Fires continued to burn Tuesday in Southern California, where the Woolsey Fire had scorched more than 150 square miles, an area roughly the size of Denver, and was continuing to threaten homes in Ventura and Los Angeles counties.

The Los Angeles County fire chief, Daryl Osby, said he could find no record of a larger wildfire in his county’s history. Two people had died in the fire and about 435 structures had been destroyed, but Osby said crews were making progress.

“We’re getting the upper hand here,” Osby said, “and there is a lot of confidence as it relates to the containment and control of this fire.”

Still, a flare-up earlier Tuesday sent large plumes of smoke billowing from mountains near Thousand Oaks, forcing road closures and evacuations. Those flames were mostly under control within a few hours.

“We are not out of the woods yet,” said Chief Mark Lorenzen of the Ventura County Fire Department. “We still have some incredibly tough conditions ahead of us.” People Are Still Fleeing the Camp Fire, Adding to the Numbers in Shelters

Cheri Hoover, 37, arrived Monday night at a shelter in Oroville — or at least, at the shelter’s dirt parking lot, where she pitched her tent.

Another wildfire three years ago left her homeless, she said, and she has made do living in a tent ever since. She was ordered to evacuate from where she had been living in Berry Creek three days ago, but refused to leave until Monday night.

“Better to be out here,” Hoover said, sitting in her small, cluttered tent with her Chihuahua. “I wanted to leave room for more people in there,” she said, nodding toward the church buildings-turned-shelter, where she has been going in to get food and water. “And I’m used to living in a tent.”

Not everyone has gone to a formal shelter, with their Red Cross volunteers and free coffee. Tiny, improvised shelters have also popped up. Michael Cannon, a caregiver and musician, has had 11 or more people — friends and family members mostly, all displaced from homes in the fire zone — sleeping over in his four-bedroom house in Chico, ever since Thursday, when the Camp Fire began.

“How many tonight? It’s hard to tell,” Cannon, 69, said as people clustered around in his kitchen or sprawled on couches Tuesday morning.

Many People Have Not Been Heard From Since the Fire

Among the missing in Paradise are many older residents of the Ridgewood Mobile Home Park, a close-knit retirement community of 97 pastel-colored homes, where residents were so tightly bound that they ate together, took walks together and often prayed together, bowing their heads at the mailbox, or in the middle of the street, when they heard of another’s misfortune. Just 20 or so of those people have been accounted for by the park’s owner, Glen Fuller.

Ridgewood was flattened by the fire, a remarkable feat of destruction even for a blaze defined by its speed and brutality. Because the fire came from the east — the park sits east of downtown — it is likely that the people of Ridgewood were among the first to be hit by the flames. Compounding the danger, many of the residents were older, making a hasty escape difficult.

This means that those who have made it out — chased by the sound of exploding propane tanks — have been left to wait for news of the people they cared for most.

“It’s awful — it’s just awful,” said Sheila Schriber Cox, 64, a retired family counselor who fled with her dog Daisy, leaving behind her walker, her oxygen tank and a stack of Bibles she had meant to distribute.

Smoke Is Causing Problems in the Bay Area

Air quality continued to be rated “unhealthy” in most of the Bay Area on Tuesday, a result of smoky air from the Camp Fire lingering near ground level, according to Walter Wallace, a spokesman for the Bay Area Air Quality Management District.

The conditions in the region, which is southwest of the fire zone, are especially dangerous for older adults, young children and those who suffer from asthma, bronchitis or lung disease. The agency is recommending that the public stay indoors when possible and avoid exercising outside.

The Sonoma County Office of Education closed all but two of its 40 school districts on Tuesday. “School districts will decide tomorrow morning at 5 a.m. whether to reopen, based on the air quality reading at the time,” said Jamie Hansen, a spokeswoman for the office.

Meteorologists are predicting “substantially better” air quality after Friday, Wallace said. “We’re kind of hoping that we get some type of air or wind that can push some of this stuff out,” he added.