In Bosnia, Entrenched Ethnic Divisions Are a Warning to the World 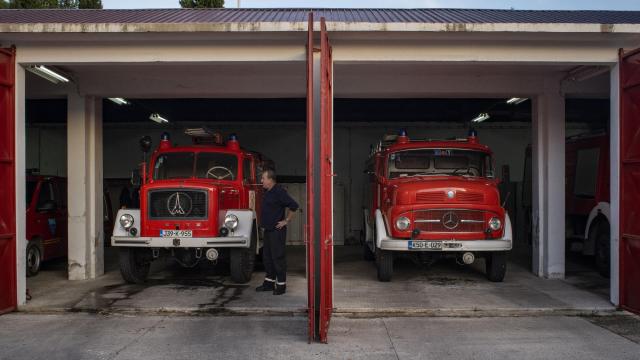 MOSTAR, Bosnia and Herzegovina — When a fire breaks out in the Bosnian city of Mostar, Sabit Golos, a veteran firefighter, knows that he does not have to worry unless the flames take hold on the Muslim side of what, from 1992 until 1994, was the front line in a vicious ethnic conflict.

That is because Mostar, though long at peace, has two separate fire brigades, one made up mostly of Muslims like Golos, who are responsible for putting out fires on the east side of the old front line and a second one staffed by Catholic Croats who douse flames on the other side.

The line vanished long ago as a boundary between warring communities and does not officially exist. But it lives on in the mind, an emblem of the ethnonationalist fissures that paralyze Mostar and the whole of Bosnia.

As Europe and the United States struggle with the rise of ethnic nationalism as a divisive force, Bosnia’s divisions offer a dark lesson in how, once cleaved apart by fear and fighting, communities can stay splintered long after many people have forgotten what it was that pushed them apart.

The entrenched disunion here was reflected in recent national elections, marked by nationalist rhetoric and open questioning of Bosnia’s continued existence as a state.

“Europe is worried these days about the rise of the far right, but this place was way ahead of the curve in showing how dangerous and enduring ethnonationalism can be,” said Tim Clancy, an American resident of Bosnia who worked in Mostar throughout the war helping victims of the fighting.

Both of Mostar’s fire brigades are part of the same municipal fire service — just as Mostar’s two garbage collection companies, two hospitals, two electricity companies, two bus stations, two popular nightclubs and two soccer teams all technically serve the same city. But they are in reality barricaded behind the zigzagging line drawn in blood a quarter of a century ago, during Europe’s worst conflict since World War II.

“Everything in this town is very clear. Everyone knows whose territory lies where,” Golos said, adding that his brigade never gets asked by Mostar’s fire service dispatcher to fight a blaze in an area that was controlled by Croat forces during the war, no matter which of the city’s two fire stations is closer.

“You are looking at your own future here,” said Adnan Huskic, a scholar in politics and international relations at the School of Science and Technology in Sarajevo. “We have been dealing with the rise of nationalist populism for years.”

Instead of creating a unitary state, the 1995 agreement that halted the bloodletting in Bosnia — reached in Dayton, Ohio, by the leaders of Bosnia, Serbia and Croatia — only entrenched the nationalist elites that prosecuted the war. It divided Bosnia into two “entities” — a Serb-run Republika Srpska and a mixed Muslim-Croat Federation of Bosnia and Herzegovina. At the summit of this ramshackle state stood the presidency, controlled by three elected presidents, one each for Bosnian Serbs, Croats and Muslims, who are known as Bosniaks.

Authority was further subdivided, largely along ethnic lines, with the establishment of 10 local units of government called cantons, each with its own president and set of ministers who duplicate many of the functions of the weak national government.

Golos, the Muslim firefighter, said he has many friends across the ethnic boundary and feels no enmity toward Serbs, who started the fighting but have now mostly left the city, or Croats, who rained artillery shells and sniper fire into his neighborhood during the war.

But he worries that, instead of fading, wartime divisions have only hardened. Because of largely segregated schooling, a postwar generation of young Croats and Bosniaks, Mostar’s two main ethnic groups, often know only members of their own group and have little or no shared experience.

“We have moved backward, not forward,” Golos said. His 20-year-old daughter, Amila, attended high school in the same building as Croat students but never mixed with them because students went to classes in shifts — Muslims from 7:30 a.m. and Croats from 2 p.m., a common arrangement in Bosnia.

She said she has no Croat friends, except for a few Serbs. On weekends, she added, Muslim youths go to Art, a nightclub in the east of the city, while Croats prefer Pink Panther on the other side of town. “I don’t want us to be divided like this but have to accept that the division exists,” she said.

Like many young Bosnians, she is thinking about emigrating to Western Europe, because work there is easier to find and better paid and also to escape the despair that grips many young people.

The economy is growing, thanks in part to large infusions of foreign aid, but unemployment among young people is nearly 60 percent.

For more than two decades of staggering from crisis to crisis, Bosnia’s fragile system has defied predictions of imminent collapse. This ability to survive against the odds, however, is now seriously at risk, said Paddy Ashdown, a British politician who from 2002 to 2006 served as Bosnia’s most senior foreign official, its high representative.

His gloomy prognosis follows national elections held in October that were dominated, particularly in the Republika Srpska, by divisive appeals for tribal loyalty.

The result of the balloting, which selected a hard-line nationalist as the Serb member of Bosnia’s tripartite presidency, has stirred fury among Croats, who complain that the election for their own slot on the presidency was tainted by ethnically impure voting: Many Muslims voted for the Croat winner, a moderate Croat now denounced by hard-liners because of his support across ethnic lines.

“Does this lead to conflict? Probably no. But the international community is sleepwalking into an international disaster of major proportions,” Ashdown said.

The problem now, he said, is not just that Bosnia is still so divided but that Europe and the United States are themselves so polarized and have diminishing interest in Bosnia’s troubles. The emerging vacuum is being filled by Russia and Turkey, each keen to reassert itself in the Balkans — Russia as a protector of the Serbs and Turkey on behalf of Muslims.

“These times remind me of the 1930s. Everything is falling apart. The center cannot hold,” Ashdown added. Rupert Smith, a British general who commanded U.N. forces in Bosnia at the time of the Dayton agreement, said the U.S.-brokered deal was never meant to be a long-term settlement but simply “a cease-fire agreement” that mirrored and inadvertently reinforced the ethnic divisions on the ground at the time.

But he thinks the Clinton administration made a big mistake by pushing for early Bosnian elections that “only cemented divisions,” he said in a telephone interview, because they favored the nationalist groups that had created the conflict.

Over two decades later, the same parties or successors rooted in the same ethnic allegiances still dominate national and local politics. In Mostar, power is divided between the Croat HDZ and Bosniak SDA, the same parties that reduced the center of the city to a wasteland.

“It is often said that war is a continuation of politics by other means, but here in Bosnia politics is a continuation of war by peaceful means,” said Adis Maksic, head of the department of international relations and European studies at International Burch University, a private college near Sarajevo. Bosnia, he added, is “not so much at peace as in a state of non-war.”

While friction between communities is rare in daily life, Amnia Popovac, an activist in Mostar for Nasa Stranka, a multiethnic party struggling to break down barriers, said nationalist political leaders, all of them men, constantly stoke fear of conflict to rally support and avoid tackling real problems. “Testosterone plays a big role in our politics,” she said.

In a recent report on Bosnia to the United Nations, the current high representative in Sarajevo, Valentin Inzeko, gave a bleak account of Bosnia’s disarray. He complained that before the October election, Bosnian politicians and parties “focused primarily on criticizing each other or the international community and grandstanding on divisive nationalist issues, rather than governing effectively and adopting necessary reforms.”

Such grandstanding, amplified by a paternalistic economic system in which jobs and the spoils of corruption are often divided along ethnic lines, has crippled Bosnia as a functioning state.

It took years of pushing by the World Bank and others, for example, before Mostar finally agreed to establish a common garbage dump to take trash from the city’s two garbage collectors, one dominated by Muslims and one largely Croat. Even now, said Nevenko Herceg, president of the cantonal government, the common dump, run by a private company in the largely Muslim side of the city, sometimes refuses to take Croat trash.

The wartime front line runs along the Nirveta River, now spanned again by a rebuilt Old Bridge, a 16th-century jewel of Ottoman architecture destroyed by Croat artillery fire during the war, and then cuts across the river for a few hundred yards into territory on the west bank, running along a boulevard lined with ruins and buildings still pockmarked by bullets.

Differences between Bosniaks, Croats and Serbs are so small — they speak the same language, look the same and mostly eat the same food — that some scholars of the 1990s war have turned to Freud and what he called “the narcissism of minor differences” to explain the fury of their rival nationalisms.

The only clear marker is religion, though Catholic Croats, Muslim Bosniaks and Orthodox Serbs are still united by the fact that few worship regularly and nearly all like going to bars and cafes.

Bosnia’s biggest curse, said Popovac, the activist in Mostar, is not ethnic or religious enmity but its nationalist political leaders, who fan the fears of the communities they claim to represent to save themselves and a deeply corrupt system that has enriched them.