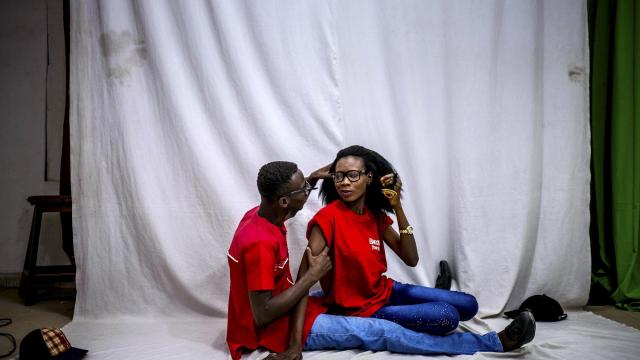 MAIDUGURI, Nigeria — Boko Haram kidnaps young women and girls, turns them into sex slaves and passes them around to its fighters like prizes. It forces them into battle, ties suicide bombs to their bodies and orders them to strike at the gates of the University of Maiduguri.

But on campus, just beyond the militants’ reach, the topics being batted around a giant lecture hall could hardly have been more different: Radical feminism. The end of the patriarchy. Husbands who do the dishes.

“I want a man who can make my breakfast,” said Rabi Isa, a 25-year-old student, rising to address the room. “One who will assist me in the kitchen and who can go shopping.”

Cheers broke out from classmates in her gender equity class.

To much of the world, the Nigerian city of Maiduguri is simply known as the birthplace of Boko Haram, the extremist group that kills with abandon and treats women and girls like property, forcing them to cook, clean, bear children and die on command.

Ever since authorities killed the group’s spiritual leader and flattened its compound here almost a decade ago, Boko Haram has lashed the city, storming it with its fighters, bombing markets, flooding the streets with homeless families escaping its rage and attacking the university at least eight times this year alone, inspired by its rallying cry, “Western education is forbidden.”

But there is another Maiduguri entirely, one that helps shed light on the ideological battle at play in Nigeria’s north: This is a regional capital recognized for welcoming people of all religions and ethnicities, a college town long known for its party scene and a vibrant city with a bold, often broad-minded youth culture that eight years of war cannot seem to extinguish.

In fact, sometimes the war even helps nudge it along.

It wasn’t even 8 p.m. on a weeknight and the twerking had already begun. The DJ was spinning Afrobeats. Bodies pressed together in dark corners. And then, just as the party started heating up, the gates of the hotel abruptly swung shut, sealing everyone inside.

The all-night party had officially started.

In a different war zone, a curfew like the one that descends on this city each night to protect residents from Boko Haram might stifle any hope of a social life. But here, it has given rise to extended lock-in parties behind protected walls. Instead of going home, young people end up carousing until the curfew lifts at dawn.

Then, when the parties get too popular and become a potential target, they close down until they pop up somewhere else.

Inside the party that night, lights bounced off a swimming pool dotted with flower petals. Here, no one was talking about the war, the many hundreds, if not thousands, of women abducted by Boko Haram, the millions uprooted by violence, facing hunger and despair. They were talking about love, sex and women’s liberation.

“They want to test you to know if you can do it very well,” said Rose Williams, 27, speaking openly about premarital sex, which she said was considered taboo by her parents’ generation. “And I do it very well.”

She and her friends watched the men and women — some in brightly colored headscarves, one with a baby on her back — swaying with arms in the air. They had come for a girls’ night out, to take a break from their boyfriends.

“And maybe I’ll find a new one tonight,” Williams said.

Blessing Christopher, a 21-year-old beauty-school student, was on the dance floor celebrating her newfound freedom after her latest relationship ended, happily unencumbered and eager to focus on her career instead of a man.

In many ways, the war with Boko Haram has been a clash of wildly divergent hopes and expectations for Nigerian society. Islamist militants who started their rebellion against the Nigerian state thought they could end government corruption by adopting a severe version of Islam.

Western ways, particularly in the realm of education, were deemed sinful. Imams in Maiduguri who spoke out against the militants and their harsh interpretation of the religion were assassinated.

The rise of Boko Haram “brought a lot of confusion into Maiduguri about what is the real Islam,” said Sheik Abubakar Gonimi, chief imam of the Bolori Central Mosque here. “Thank God we know our religion, and this had nothing to do with Islam.”

After the militants were chased from the city, imams became more vocal, speaking out against the extremist philosophies and practices of Boko Haram. Life eventually started easing up again, and young people have found safe spaces to let loose. Inside the concrete walls of the city zoo, dozens of young couples hold hands as they pass the elephants and the snake pit. They lounge on the grass or sit arm in arm on the benches in front of the raptor cage, the zoo’s most popular make-out spot.

One couple, Kefas Iliya and Ruth Joseph, sprawled out on the patchy lawn studying for exams. When they met two years ago, Joseph wanted to focus on her environmental biology studies, not romance.

Iliya won her over by reciting Gambian poetry. Now, they hope to marry in two years when they can settle into a dual-career household.

For all the new freedoms, many longtime residents say the staggering violence and tenacity of Boko Haram has succeeded in crushing much of Maiduguri’s traditional spirit.

“The war destroyed the basic fibers of our society,” said Zannah Mustapha, a prominent lawyer who has acted as a mediator between the government and Boko Haram members. “We were known for peace.”

For years, people stopped holding elaborate, seven-day weddings with drumming, dancing and banquets of fried rice. Shops stopped selling alcohol. Concerts that once drew musicians from as far as Ethiopia came to a halt. A local dance troupe stopped its daily routines at an old amphitheater. Dancers practiced their moves in bedrooms, with the shades drawn.

Before the war broke out, Mohammed Bukar and his friends were regulars at a local disco where they danced to American artists like Bobby Brown and Lisa Lisa and Cult Jam.

Then one night in the early days of the war, Bukar recalled, Boko Haram stormed the club and killed patrons inside. The disco closed. As the fighting continued in Maiduguri, other nightclubs and bars also were shuttered.

But in the past two years, as the military has begun making headway against fighters, a sense of security has slowly returned to the city. People are regaining their social lives in fits and starts, as security allows, and expressions of the culture Bukar once enjoyed spring up in unexpected ways.

Along the same streets where nervous security officers keep an eye out for suicide bombers, one traffic officer does his job while impersonating Michael Jackson, moonwalking across the intersection and guiding cars with his single white glove.

Security still defines many of Maiduguri’s dating spots. A Chinese restaurant set far back from the street, protected by tall steel gates and a metal detector, provides a spot where couples smoke water pipes and pick at greasy spring rolls. Vehicles are searched for explosives before entering the parking lots of hotels that serve alcohol, despite a ban on sales in much of the city. In another part of the city, vehicles crammed onto a short dirt road, leading to a narrow hall lined with couples standing close to one another. The passage opened up into a large beer garden where no fewer than 300 young people sat around plastic tables, nursing bottles of beer and watching a group of young men bend their bodies to loud music, laughing. Soldiers still in uniform milled around in the crowd, bottles of beer in hand and rifles dangling from their torsos.

A local photo studio lets couples transport themselves from the grimness of the war, posing for portraits in front of a selection of backdrops: a field of white horses, a palatial living room with a spiral staircase, giant floating roses or a gently flowing river. Outer space is popular.

Lillian Usa, dressed in a Clash T-shirt and dark-rimmed glasses, was there with her boyfriend, a medical student, standing near a wall decorated with lipstick kiss smears from women perfecting their makeup.

In between photo shoots and changes of outfits, she listed the things she doesn’t like about her boyfriend — chiefly his hot temper. They think about marriage but want to wait until they both have completed their studies.

Another couple, Samson Luca and Prisca Ibrahim, were having portraits taken before Luca, a soldier, left on a mission to fight Boko Haram.

“I’ve been away a lot so I wanted to come here so that she can look at me and remember me,” Luca said. “I’ll be gone a long time.”

He took off his Playboy bunny T-shirt, and the couple changed into matching camouflage shirts to pose for photos.

Some couples say they still hide their physical relationships from old-fashioned parents who would not understand, despite the fact that Maiduguri is a cosmopolitan city where televisions are tuned to CNN and Adele songs are popular ringtones on smartphones.

Many of the views here seem to come from a different planet than Boko Haram’s; the group’s leaders preach that women can earn their way to heaven by blowing themselves up alongside soldiers at checkpoints.

At the university campus, Raphael AuduAdole, a professor wearing faux crocodile loafers and carrying a laptop tucked under his arm, stepped behind the lectern to explain the roots of male oppression.

“Society is constructed to favor the interests of men, isn’t it?” he asked his class.

“The man is trying to dominate,” he said. “Are you following me?”

“Women are marginalized, oppressed and abused,” he continued. “Men have taken the part of domination and force in relations in the family. This is a big problem in society and we need to do something about it.”