A First Lady Gets Personal 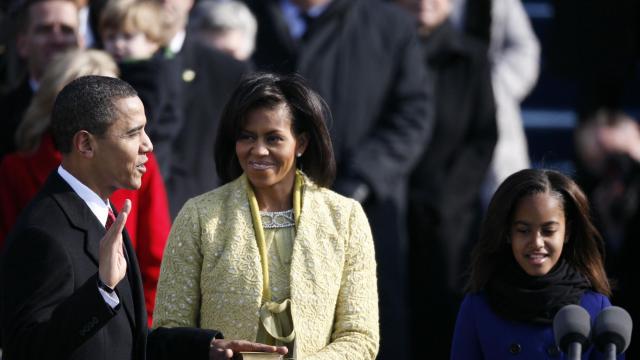 For anyone who’s wondering: No, she’s not running. In her new memoir, “Becoming” — a book whose reportedly enormous advance rendered its contents almost as closely guarded as the bullion at Fort Knox — Michelle Obama puts to rest any speculation about her political ambitions. “I’ve never been a fan of politics,” she writes, “and my experience over the last 10 years has done little to change that.”

Note how she says “the last 10 years,” not two. She emerges in these pages as a first lady who steadfastly believed in her husband’s abilities but had no illusions that the sludge of partisanship and racism would melt away under the sunny slogans of hope and change. A month after President Barack Obama started his first term in 2009, Michelle Obama was sitting in the balcony during a joint session of Congress, where she could see a cadre of Republicans scowling while her husband delivered his address. “They would fight everything Barack did, I realized, whether it was good for the country or not.” She continues, “It seemed they just wanted Barack to fail.”

This might sound like the acuity of hindsight if it weren’t consistent with the woman she had already shown herself to be: Michelle, the wry, orderly realist to the dreamy, cerebral Barack, joking on the 2008 campaign trail about her husband’s slovenly habits in the real world. She also talked candidly then about how the popular enthusiasm for him and his message — in a country in which the prospect of a black president had seemed far-fetched even to her — made her feel. “For the first time in my adult lifetime,” she told a crowd before the Wisconsin primaries, “I’m really proud of my country.”

She got hammered for it and felt blindsided, taking it as a lesson that she needed to be even more careful and prepared than she already was. Having gone from a working-class upbringing in South Side Chicago to the rarefied precincts of the Ivy League, she was already a self-described “control freak” who took her minority status at Princeton as a “mandate to overperform.” Politics, though, turned out to be a weird mix of elite pretensions and schoolyard bullying, amplified by opposition research.

Early in “Becoming,” she recalls how, as a 10-year-old, she earned the respect of a mean girl named DeeDee by throwing a punch at her. Four decades later, campaigning for Hillary Clinton, Obama made an impassioned case for civility — “When they go low, we go high” — that she explains as part of a lifelong belief in speaking out “against bullies while also not stooping to their level.” Obama never squares the two episodes, making the decision to include DeeDee all the more intriguing or puzzling, depending on your perspective; DeeDee, it seems, is an outlier — the grain of sand in this polished pearl of a memoir.

The book is divided into three sections — “Becoming Me,” “Becoming Us” and “Becoming More” — that sound like the bland stuff of inspirational self-help. Which isn’t to discount how useful empowerment can be; Obama emphasizes how important role models are, especially for young women of color in a culture that isn’t changing fast enough. But this book isn’t all unicorns and rainbows. By the end of it, she ultimately champions endurance and incremental change; she will probably be lauded and lambasted accordingly.

Obama recalls a mostly happy childhood. Her father tended boilers; her mother stayed at home to care for Michelle and her older brother. Even as her father’s body began to break down from multiple sclerosis, he insisted on going to work. His illness taught her the necessity of meticulous planning, of showing up not just on time but early — “the lesson being that in life you control what you can.” What you can control on your own turns out to be a lot more than what you can control as one-half of a partnership, especially when the man you marry isn’t a “box checker,” like you.

When Michelle Robinson first heard her fellow lawyers swooning over a new summer associate named Barack Hussein Obama, she was dubious. “In my experience, you put a suit on any half-intelligent black man and white people tended to go bonkers,” she writes. Other than registering his “rich, even sexy baritone” on the phone, she wasn’t all that impressed, especially when he showed up for his first day at work irritatingly late. The “toppling blast of lust, gratitude, fulfillment, wonder” would come later. But she would always find it hard to adjust to his tardiness, his constant belief that things would simply work themselves out, and the way his ambitions often dictated the course of their lives.

“Becoming” divulges some details that the Obamas haven’t discussed publicly before: the fertility treatments they used to conceive Malia and Sasha; the miscarriage that left her with a “pang of longing followed by a bruising wallop of inadequacy” whenever she saw women walking with their children in the street; the couples counseling that saved their marriage when she felt as if his political career “would end up steam-rolling our every need.”

She talks about the wardrobe that attracted so much scrutiny, explaining the great pressure she felt as the only African-American first lady so far in a culture addicted to image and double standards. She also includes some requisite ticking off of her achievements from inside the White House, including her initiatives against childhood obesity and in favor of veteran support.

But it’s the moments when Obama tries to make sense of what she’s seeing now, in the country, that are among the most moving — if only because she’s so clearly struggling to reconcile the cleareyed realism of her upbringing, brought about by necessity, with the glamorous, previously unthinkable life she has today. During her entire time in the White House, she says, “I had lived with an awareness that we ourselves were a provocation.” She unequivocally calls the new president a “bully” and a “misogynist,” watching him do everything he can to roll back her husband’s legacy and replace “carefully built, compassionate policies” with what seems to be brazen cruelty. “I sometimes wonder,” she writes, “where the bottom might be.”

“My grandfather lived with the bitter residue of his own dashed dreams,” she recalls; like many African-American men of his generation, she says, his stymied aspirations left him with “a basic level of resentment and mistrust.” Her life has been different, filled with possibility, wealth and achievement. She insists on enumerating the gains the country made in the eight years before 2016, however incremental, because it would be too easy, she suggests, to succumb to despair. “Progress is slow,” she tells young people nowadays; they need to rely on “their persistence, self-reliance and ability to overcome.”

For all the attempts by conservatives a decade ago to paint her as a radical, Obama seems to be a measured, methodical centrist at heart. But hers isn’t a wan faith in expanding the pie and crossing the aisle. Her pragmatism is tougher than that, even if it will come across as especially frustrating to those who believe that centrism and civility are no longer enough. As she writes in “Becoming,” she long ago learned to recognize the “universal challenge of squaring who you are with where you come from and where you want to go.”