In a Transylvania Town, Bears and Humans Collide at the Dumpster 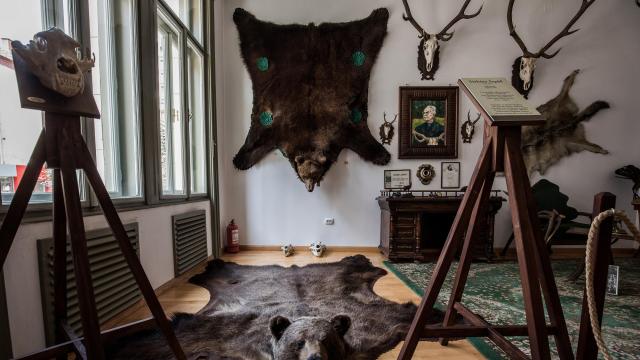 BAILE TUSNAD, Romania — One night after work in Baile Tusnad, a rundown spa town in eastern Transylvania, a young couple sat in a dark-blue sedan, headlights on, gazes fixed on dumpsters on a cobblestone back street.

They were waiting for bears.

There is limited entertainment in this mountainous region of central Romania after the bars and restaurants close by 11 p.m. So the liveliest spots in town are near the dumpsters, where huge brown bears forage for food.

“This is the local attraction,” said Hunor Stekbauer, 26, a slender man with glasses and shirt sleeves rolled up to reveal a vintage calculator watch. He was sitting in the car one evening, one hand holding a cigarette out the window, eyes fixed on the trash bins.

His girlfriend and co-worker at an energy supplier, Henrietta Gergely, 20, was in the passenger seat. She said many local residents and others from towns nearby hung around at night hoping to spot a brown bear.

But if one were to show up, she admitted, “I’m not getting out of the car.”

Others feed, photograph and chase the bears. Sometimes the humans get hurt, but they still gather to spot the animals.

Baile Tusnad, once known for its healing waters, has earned a measure of fame for bear spotting in Europe because of a confluence of hunting practices and a former dictator’s legacy that allowed the bear population to flourish.

The town, with a human population about 1,600, was prosperous in the 19th century, when the area was on the eastern fringe of the Austro-Hungarian Empire. But it has long since lost its imperial luster.

With its patchwork of carved wooden villas, crumbling communist-era concrete buildings and recent glass-and-steel additions, it stands in stark contrast to the beauty of the valley, where dense forests meet the Olt River, providing sanctuary for brown bears.

Nicolae Ceausescu, the country’s former dictator and an avid bear hunter, made sure there were plenty of bears around to provide him award-winning trophies that are now fixed in an eternal snarl on museum walls. He left a bear population that has grown to more than 6,000.

But the animals’ habitat has shrunk and their food sources have diminished as development encroached. Deforestation and large-scale foraging for mushrooms and forest fruit also limited their space and food. As the bears began emerging from the forests into towns and villages, they destroyed gardens, damaged livestock and threatened people.

Soon, the case for controlling them gained momentum.

Romania had banned trophy hunting of bears two years ago as part of the European Union’s push to maintain the diversity of wildlife in its natural environment. The ban sharply reduced the income of hunting societies that had marketed bear trophies for tens of thousands of dollars to wealthy foreigners.

The hunting societies share the responsibility of caring for wild animals, including the bears they cannot hunt, and since the ban, they have been accused of underfeeding the animals.

Authorities in Bucharest issued dozens of authorizations to kill bears that posed a threat to humans or livestock while the hunting ban was in place. Then, in a victory for hunters, a new plan adopted in July called for reducing the bear population by selective hunting.

Jeno Kovacs, 47, a hunter in Baile Tusnad, said that without selective hunting, bears that come into town would die in car accidents, get hit by trains or be poisoned by people.

Though selective hunting hasn’t begun yet, the plan has drawn fierce opposition from organizations like the World Wide Fund for Nature, which says culling is not an efficient method of controlling the bear population and the number of bears in the region has been inflated by those in favor of hunting them.

“The majority has decided, and that means the hunters,” said Cristian-Remus Papp of WWF Romania. In addition, environmentalists say, the news media has cast the bears as villains. When a bear hurt an 8-year-old boy in May near Calugareni, a news website published images of his wounds. When the government granted permission to kill the bear, a photo of its carcass flanked by two hunters was published online.

Papp acknowledged that the number of reported attacks had grown but said that, in most cases, people were provoking the bears. He said the animals that approached people were usually young, “a little dumb and fearless.”

When bears and humans meet, it can turn violent. Last summer, a woman from Hungary was wounded when she tried to take a selfie with a bear at Lake Sfanta Ana, near Baile Tusnad.

Jozsef Keresztes, 47, was disfigured three decades ago when a bear surprised him in fields near Bixad, a village south of Baile Tusnad.

“I had never seen a bear before or since then,” Keresztes said at his childhood home. “We’re used to them, but we’re fearful of them.” Janos Szin, a stocky self-described “bear shepherd,” sees opportunity in the animals. He guides bear-watching tours in the pine-studded slopes that surround Baile Tusnad. It comes down to a choice, he says: “Do you want to see the bear as a beggar rummaging in the dumpsters, or as the king of the Carpathians in his own castle?”

In June, Szin drove an SUV up a remote logging road to a viewing point, stopping near a clearing where he had set up a wooden hut with giant two-way mirrors looking out on a carpet of wildflowers. Four tourists entered and sat in front of the glass.

Outside, Szin put out the bears’ daily allotment of food in accordance with hunting rules: kernels of corn. Minutes later, bears began to appear. Szin had given them names like Panda, Bea and Zephyr. They walked, jumped and rolled round. The tourists sat in awe.

Just before night fell, with six bears still in the clearing, Szin and his group sneaked out the back of the hut and walked through the forest to his SUV.

Away from the tourist trail, the bears are a source of frustration. A couple of hours’ drive west of Baile Tusnad, shepherds herd large flocks of sheep in verdant hills near the village of Soimusu Mic. Here, the loss of livestock to bears does considerable damage to the families who own them. And a cry for help during an attack often draws nothing but echoes.

On one hill, Sandor Tamasi, 27, stood near his flock as he recalled a summer night when he was herding sheep. Suddenly, he said, the animals stopped, “petrified.” Moments later, he found himself pulling his assistant — who had gotten too close to some bushes — from the jaws of a bear.

“Many have told us to just bring home the sheep,” Tamasi said. “Should we get ourselves killed?”

Back in Baile Tusnad, it was near midnight. Stekbauer and Gergely had moved on from the dumpster, still hoping to spot a bear. Kovacs was at the hunter’s inn he runs near the town center when — lo — he and a visitor saw a large bear casually walking down a cobbled street.

Kovacs and others greeted it with excitement. “I’d never want to shoot them,” he said, as he visibly softened at the sight of the animal. “I love them.”

Farther down the road, the young couple, guided by the sound of howling dogs, spotted the bear, too. It was the highlight of their night. Bear sighted, they gave a friendly wave and drove off.