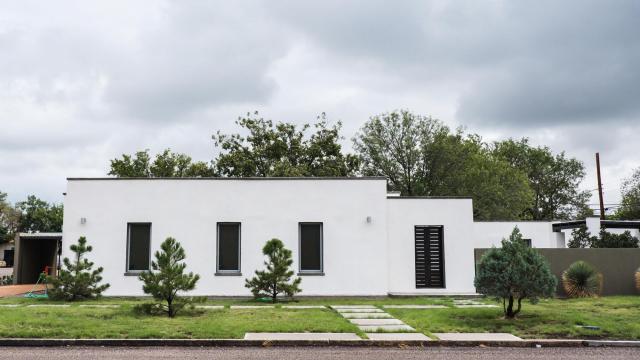 MARFA, Texas — Adobe is one of the oldest building materials known to humanity, especially in arid regions like the southwestern United States. The material — earth, straw and water, pressed and sun-dried, was always plentiful and above all, dirt cheap.

In Marfa, thanks to the vacation-home owners and retirees who have flocked to this artsy outpost in the West Texas desert, adobe also has become fashionable, a building material befitting the town’s cool mix of culture and desert aesthetic.

But for many of Marfa’s longtime residents, the gentrification of the adobe home has made living in one rather expensive.

Required by Texas law to find more revenue, the Presidio County tax assessors realized that adobe homes in Marfa were selling at a premium, and so they raised their appraisal values in 2017, just three years after a townwide revaluation. That has meant two big tax increases, not only for owners of the high-end and expansive adobe homes with backyard pools, xeriscaped gardens and adobe walls to surround them, but also for hundreds of more modest, weather-beaten residences clustered around the south side of Marfa, where historically most of the town’s Hispanic population has lived.

“Why are you going to tax them for using the cheapest building material they could get?” said Sam Martinez, 58, whose family owns an adobe home built in the 1800s, and whose ties to Marfa are just as long-standing. All over town, the tax authorities sunk their hooks into adobe.

A century-old two-bedroom partial adobe house with a metal roof and laminate floors, wedged between two much bigger homes on West Dallas Street, saw its annual property taxes rise from $905 five years ago to $3,003 today. In that same time, a renovated three-bedroom with a partially exposed adobe wall in its living room saw its taxes go up from $1,365 to $4,988.

Taxes on a wind-battered one-bedroom on the southeast edge of town, with a rusting corrugated metal shed in its yard, rose from $319 to $1,953. For a tidy three-bedroom with a wood-burning fireplace, a detached garage and a large yard, located north of the Marfa courthouse, the bill went from $1,848 to $4,469.

Last year owners of 448 of the 530 adobe homes in Marfa — 85 percent — protested the increased appraisals. Some of them received adjustments, but not Maria Flores, a 57-year-old house cleaner. She saw her taxes rise to $1,050 this year, compared with $752 five years ago. The appraisal board told her that because of improvements she’d made — a fresh coat of paint and a new fence — her tax would not be lowered.

Originally a water stop along the Galveston, Harrisburg and San Antonio Railway, Marfa began as a sleepy ranching town that was de facto segregated well into the 1960s. Most of the existing adobe homes were located on the south side of the railroad tracks, without plumbing and electricity.

“The Hispanics, in my time, all lived in little adobe houses,” said Rito Rivera, 78, who still lives in one of those houses. “The Anglos were ranchers — cowboys and landowners — and they could afford better material.”

The appraisal on his adobe house increased from $39,770 five years ago to $104,660 this year. Rivera recently learned that he had prostate cancer, unlucky news that came with one upside: Under state law, it helped him qualify for a veteran’s disability exemption from his rising tax bill. But an adobe home his wife inherited from family in town saw its bill spike to $1,925 from $1,170 five years earlier.

Fortunes changed for Marfa, and adobe, when sculptor Donald Judd arrived in the 1970s and turned its empty expanses into something of a vast outdoor studio. Marfa came to signify something within the art world, people from far reaches traveled to the desert to see it, and the prices of things began to reflect the cities they came from. Marfa appears as you approach the blinking traffic light at the crossroads of two country highways. While it clings to the slow and deliberate pace of rural life, it retains the cosmopolitan sensibilities that arrived with Judd. Downtown, amid the handful of buildings that make up Judd’s legacy, are small gallery and studio spaces, restaurants with seasonal menus, and adobe buildings stuccoed white and hung with neon signs.

Marfa, with fewer than 2,000 full-time residents, doesn’t have a mechanic, but it has a public radio station, and the Marfa Book Co. carries an art section that rivals niche bookstores in New York. It’s a town that feeds on its pointed self-awareness: a greasy spoon called “Bad Hombres,” owned by the town’s justice of the peace, stop signs spray-painted to read “Stop Talking.” The railroad tracks remain, and every couple of hours, the train comes crashing through with apocalyptic bravado.

Judd, a proponent of preservation who died in 1994, liked adobe. When he purchased “The Block” — a city block in Marfa he would turn into his home and personal collection — he erected a 10-foot adobe wall around it. All of a sudden, humble adobe was cool. The classic Marfa adobe home was once a two-room structure made of dirt dug from a pit in the backyard. No longer. Adobe became popular for three- or four-bedroom homes with observatories for stargazing and custom-tiled kitchens. And it wasn’t just dirt anymore. Construction companies in the area like Rainbow Adobe specialize in homes made out of cement-stabilized adobe to prevent erosion.

Susan Kirr, a filmmaker, and her artist husband, Rusty Martin, who bought an adobe home in 2005 while they were still living in Austin, admired the soft rounded shape the material made, its insulating properties and its relative affordability. Since they bought the house, their taxes have nearly quadrupled from $639 to $2,463.

But until recently, even as Marfa’s housing prices rose dramatically, its appraisals for tax purposes did not. And since public schools rely on property tax revenue, Marfa’s school district faced major penalties once the state comptroller got wind of the disparity between the appraised value of the houses and their market prices.

After the county’s 2014 action, property appraisals were still not close enough to market value to comply with Texas law, which requires them to fall between 95 and 105 percent of market value. To fix the problem, and increase tax revenues, the town created a separate, higher appraisal classification for adobe houses, an unusual move. The jump in value — and taxes — incited lower-income homeowners, who saw it as an unfair blunt-force tool.

But Richard Petree, a consultant hired to help Marfa comply with the state law, said the new classifications were merely a reflection of what’s been going on for years with adobe. “It’s a very unique market,” he said.

While the adobe homes in Marfa are now yielding more tax dollars for Presidio County, the local schools can’t expect any windfall. Despite the living conditions of many of its 350 schoolchildren, the Marfa district is now considered “rich” by Texas standards because of the new tax revenue, and thus must refund more than $400,000 to the state for use in districts with less money.

In many respects, even the hardest-hit homeowners recognize that Marfa’s transformation has paid dividends. Thanks to all those visitors and retirees, it has a thriving economy for a small town. According to Census Bureau figures, its median household income, $44,107, exceeds that of the nearest major city, El Paso, about 200 miles away, and is nearly double that of Presidio, a town 60 miles to the south, on the Mexican border.

“There’s always something to do in Marfa,” Martinez said. “I’m grateful for that. Donald Judd brought money to Marfa.”

Martinez once made adobe bricks while working on a construction project at the Capri, a bar and restaurant that serves craft cocktails and small plates.

“People used to joke, ‘Sam is from Marfa but now he can’t even afford to live in it,'” Martinez said.