In a Chinese Enclave of Canada, the Sweet Escape of Karaoke 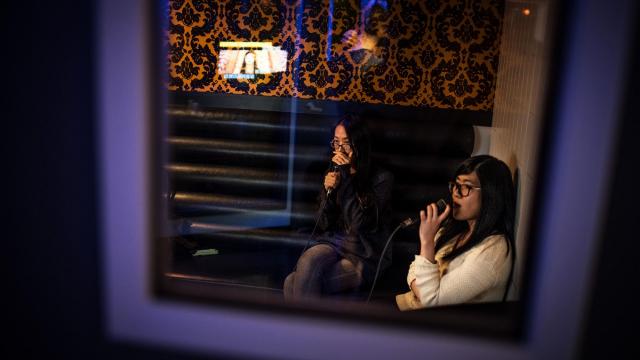 RICHMOND, British Columbia — What sort of karaoke joint offers 18 kinds of bubble tea but only one Abba song?

If you’re a Chinese immigrant living in metropolitan Vancouver, then you’ve probably already been there: Party World KTV, a branch of the Asian karaoke chain, which looks as if a wedding-cake-inspired UFO had just landed in the middle of this majority ethnic-Chinese city.

It’s a popular destination for anyone looking to warble a favorite Chinese pop song, accompanied by music videos occasionally set in the Ming dynasty and frequently featuring people crying.

On a recent Friday night, anyone meant Karns You, a bleach-blond transplant from China’s coastal Guangdong province. He was on his feet, eyes closed, belting out a rock ballad by Hong Kong pop star Eason Chan. His girlfriend sat beside him, transfixed by her smartphone. Not that it mattered — You was there for karaoke, or KTV as it’s known in China, a guilty pleasure he indulges in often four times a week.

“Sometimes you just want to sing, and then sing more,” said You, 30, who works for his uncle’s construction company, after his microphone session had ended. “KTV is the best way to get rid of stress.”

With thousands of songs in Mandarin and Cantonese, platters of cured beef and a maze of private rooms packed almost entirely with Chinese immigrants, the Richmond satellite of Party World, long a karaoke staple across China, is a crooning microcosm of Canada’s rapidly shifting urban cultural landscape.

Richmond’s population is now 54 percent ethnic Chinese and three-quarters nonwhite or aboriginal, according to the 2016 census, a stark change from 25 years ago, when Caucasians made up nearly 70 percent of residents. Restaurants serving cuisines from practically every Chinese province line the city’s streets, where Mandarin and a slew of Chinese dialects are far more likely to be heard than English.

But the city’s demographic transformation has fueled ethnic tensions, sometimes pitting neighbor against neighbor. For years, some residents have complained about the proliferation of commercial signs written solely in Chinese, which prompted the City Council in the fall to adopt a policy encouraging businesses to include English on at least 50 percent of signage.

In December, the British Columbia Human Rights Tribunal agreed to hear a case filed by a group of condominium owners who say they have been racially discriminated against by their elected condominium council, whose members are all Chinese and conducted meetings only in Mandarin, refusing to use English.

While many residents take pride in Richmond’s ethnic diversity, some discovered flyers in their mailboxes in the days after Donald Trump’s election as U.S. president that read “Step aside, whitey! The Chinese are taking over!” and exhorted white people to “Save Richmond” by joining the so-called alt-right movement.

But cultural (if not always musical) harmony resounds at Party World, one of several karaoke clubs in Richmond that cater to the hankerings of metro Vancouver’s soaring Chinese population.

“KTV is crazy fun because you can act ridiculous together,” said Jeffrey Hou, 20, a student at the University of British Columbia, as he waited for a private room with a large group of friends, all of whom were of Asian descent. Hou said he did karaoke every few weeks, with a well-practiced setlist that includes Eminem, Taylor Swift and Linkin Park.

In the spirit of the art form’s cheesiness, his friend and fellow university student, Evan Wang, 20, confessed to a preference for Christmas songs. Which, exactly? “Everything,” he said, blushing. Not that anyone was judging, least of all this reporter, who for the record has whiled away many nights in karaoke emporiums in Beijing, where he was known to deliver spirited renditions of ‘90s boy band classics and would not leave until Garth Brooks’ “Friends in Low Places” was completed, much to the delight of his companions and the odd waiter.

Sadly, the halcyon days of Chinese karaoke, with its legendary free buffets and private rooms ornately decorated to resemble gingerbread houses and outer space, are no more. In recent years, Party World and other chains in mainland China have closed scores of outlets as social media and mobile karaoke apps have led to steep declines in business, if not hangovers.

For many of Richmond’s Party World customers, crooning on a couch for around $18 an hour is a chance to relive their youth and a rare (or frequent) opportunity to let loose their insanely talented inner diva.

Upstairs, in the Empress Lounge, a karaoke bar outfitted with fuchsia chandeliers, copious amounts of alcohol and booths facing a gigantic projector screen, four cellphone salespeople had gathered for an evening of song and beer. “We came here because we can drink,” said Jiang Ben, 25, a Chinese immigrant whose parents sent him to Canada six years ago for university and who regularly sings karaoke. “Twice a month for sure, no lie.”

Beside him sat Wang Yang, 28, a native of China’s central Henan province who goes by the name Sonique. “It’s French,” he said, before launching into an easy-listening Mandarin hit by Wang Leehom, an American Chinese pop sensation who grew up in upstate New York. “Black ponytail curled in a bun, wrapped around all my loving thoughts of you,” the Wangs crooned. On screen, the singer strummed a guitar while standing on the roof of a pickup truck in a field of wildflowers. “Cut a strand of your hair, lay it on my chest.”

“Asians are introverted,” he said. “We hide our emotions inside, so KTV lets us express our feelings about sad times, like high school breakups.” He paused, looking wistful. “This totally takes me back.”

For most of the evening, their co-worker, Qi Qi, 23, a woman from China’s coastal Jiangsu province, kept quiet. “I’m shy,” she said.

But even Qi could not resist Party World’s siren song, or at least, Celine Dion. As the theme from “Titanic” began to gush from the speakers, she grabbed the microphone and let it out, singing as if no one were listening, even though they were.