In 2018, Where Does Victoria’s Secret Stand? 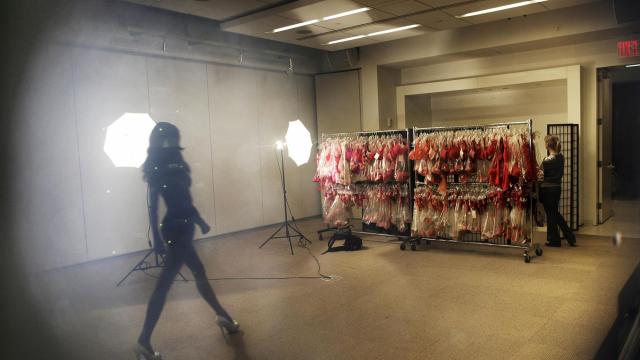 The push-up bra may be finally going the way of the corset.

The news this week that Jan Singer, CEO of Victoria’s Secret Lingerie was stepping down — this after a PR crisis over transphobic remarks made by another executive — was just the latest hit to a brand that has been in steady decline for years.

The marketing of Victoria’s Secret has been nothing if not consistent. The company’s fashion show this month, complete with skinny models, push-up bras, thongs and strappy stilettos, was a near carbon copy of the one it first mounted in 1995, albeit with more feathers, sequins and wings. And its adherence to that vision of sexy will not be compromised. Not by those who criticize the whole affair as sexist, nor by the slew of new bra startups that offer products meant for comfort and ease, nor even by the women abandoning Victoria’s Secret to shop elsewhere.

Victoria’s Secret is still the leading U.S. lingerie brand, but its share of the market is falling rapidly. Sales are sagging and the company’s stock is down 41 percent this year. In a September 2017 consumer study conducted by Wells Fargo, 68 percent of respondents said they liked Victoria’s Secret less than they used to and 60 percent said they think the brand feels “forced” or “fake.”

“Victoria’s Secret is losing share to other brands because it’s out of touch,” said Paul Lejuez, a retail analyst at Citi who follows L Brands. “The way it’s marketing is out of touch. Women don’t want to be viewed as stereotypical sexy supermodels buying lingerie just to impress men.”

The “Victoria’s Secret Fashion Show” on television hasn’t fared well either. It has shed nearly half its total viewers in five years.

Consider: In 2013, when the show was still something of an event, it drew an audience of 9.7 million viewers, bigger numbers that night than NBC’s airing of “The Voice.” Last year, the show drew an audience of only 5 million, about 3 million fewer viewers than tuned into CBS’ broadcast of the holiday classic “Rudolph the Red-Nosed Reindeer” two hours earlier.

Ed Razek, chief marketing officer of L Brands, made headlines this month as well, when, in an interview with Vogue, he expressed disinterest in the idea of casting plus size and transgender models in Victoria’s Secret shows.

“Why don’t you do 50?” Razek said, referring to garment sizing. “Why don’t you do 60? Why don’t you do 24? It’s like, why doesn’t your show do this? Shouldn’t you have transsexuals in the show? No. No, I don’t think we should. Well, why not? Because the show is a fantasy. It’s a 42-minute entertainment special. That’s what it is.”

The response on social media was swift and furious. Razek walked his statement back the following day, saying that his comment “came across as insensitive” and that “we absolutely would cast a transgender model for the show.” (He added that while transgender models had come to castings, none had yet made the cut for the show.)

But the outrage continued. “My message to Victoria’s Secret is: Challenge accepted,” wrote Teddy Quinlivan, a trans model, on Instagram. Plus-size model Tess Holliday tweeted: “Who needs VS anyway?!”

— Raising the Bra Sara Lynn Michener, 39, stopped shopping at Victoria’s Secret about 10 years ago. She said she was frustrated by the seemingly inexperienced sales people, the overwhelming “pinkness” of the brand and the inauthentic “glamazon images” in the store. She now mostly buys her bras online and at Nordstrom, environments that are mostly free of the sexed-up imagery that makes Victoria’s Secret the store it is.

“Even if I walk into the Nordstrom section, I’m going to have a bad day, so you can imagine Victoria’s Secret,” Michener, a writer who lives in the Bay Area, said.

Other women have decamped to new underwear startups that offer comfort, relatability and pared-down style. They include ThirdLove, which was started by a former product manager at Google in 2014; True and Co, which offers a quiz to help customers determine their bra size; Knix, a Canadian brand that employs patented bonded technology to keep sweat and leaks from seeping through undergarments; and Savage x Fenty, Rihanna’s popular new brand.

These companies were founded by women, and were born of a frustration with the industry at large. Victoria’s Secret, on the other hand, was designed with the straight male consumer in mind.

Victoria’s Secret was started by entrepreneurial couple Roy and Gaye Raymond in 1977 as an antidote to the confusion and shame Roy Raymond felt in department store lingerie sections. He told Newsweek in 1981 that while shopping for his wife he “was faced with racks of terry-cloth robes and ugly floral-print nylon nightgowns, and I always had the feeling the department store saleswomen thought I was an unwelcome intruder.”

Heidi Zak, chief executive of ThirdLove, said she used to dread having to drive to the mall to go to Victoria’s Secret and buy a bra.

“I came out and I took the pink striped bag and stuffed it in my bag because I was embarrassed I’d been shopping there,” Zak said. “Nothing about the brand — the aesthetic, the product — nothing really resonated with me.”

The experience left her searching for a retailer with a greater variety of sizes — Victoria’s Secret offers bras sized from 30A to 40DDD, though the average bra size in the U.S. is 34DD and growing — and for bras that didn’t bind her up like torture devices. She couldn’t find it, so she founded it instead. ThirdLove offers 74 sizes, including half sizes, as well as nursing bras for new mothers, and has raised about $30 million in funding in four years. Since 2016, it has grown an average of 300 percent. The company’s natural-hued advertising campaigns featuring women of all ages, sizes and skin tones can be seen all over Instagram and plastered along the passageways of New York City’s subway system.

Blair Imani, 25, an activist and writer, is a recent devotee. "You feel confident when you are secure and I feel secure in ThirdLove,” she said. “I love that they have nude for every skin color, not just beige. And they are functional and affordable, but I don’t feel like I’m losing the feeling of being beautiful when I wear them.” Imani said she used to shop at Victoria’s Secret in high school but thought the bras were low quality, a point other women made. When she started buying ThirdLove bras, she realized she had “been measuring myself wrong. I’d thought for a long time I was a B, but I’m a C and a half.”

“It’s hard to know your size, especially if you come from an economically challenged background,” she said. “ThirdLove is leveling the playing field in that sense.”

Accounting for women’s lived realities, like the wide variation in breast size, was also a part of Knix’s business strategy. Since 2013, the company has gained a cult following in the intimate apparel space for its leakproof underwear and wireless bras.” I was thinking about what happens to women’s bodies at different stages in their lives,” said Joanna Griffiths, the founder and chief executive. “Women leak during normal activities.”

The company also uses advertising to confront cultural taboos and shine light on how women’s bodies actually appear. Nikki Leigh McKean, a 38-year-old photographer and restaurant owner who lives in Toronto, appears in several ads for the company, and said she sometimes laughs so hard “she actually does pee her pants a little,” so leakproof underwear has been ideal.

McKean had a double mastectomy last year and no longer wears bras; the company used a topless image of McKean on social media and on public buses.

“I want to shop from a brand that stands for body positivity,” she said. “And getting to be part of it made me feel like a have a voice, like I could inspire just one person, and having that platform has been empowering, especially after many doctor’s appointments when I’m asked if I’ve changed my mind about reconstruction.”

“When we launched we knew we wanted to use our customers as our models,” Griffiths said. “Our campaigns are all real women. We have that built into our brand.”

The proliferation of online retailers still doesn’t explain Victoria’s Secret’s slide. Customers may be gravitating to new offerings, but no single business has anything near the reach of L Brands, which is still the biggest lingerie company in the U.S. And it remains an affordable option out there, with bras that on average cost from $20 to $70, while ThirdLove’s bras range from $48 to $84.

Decreased foot traffic at shopping malls could be hurting Victoria’s Secret, as could their elimination of a swimsuit line. (The company said swimwear accounted for less than 5 percent of sales in 2016, the last year it was available.) Other retail trends, including the rise of athleisure and the embrace of less structured bras — most notably, the bralette — and “granny panties,” suggest that consumers have come to reject the ideals that Victoria’s Secret continues to manufacture. Then there are those who have decided to give up on bras entirely. Blogger Chidera Eggerue created an Instagram hashtag, #saggyboobsmatter, which took off last year as a host of women shared pictures of themselves braless (but clothed) as a counterpoint to the age-old image of the corseted woman.

“It is absolutely not the case that people have just given up wearing bras,” said Cora Harrington, author of “In Intimate Detail: How to Choose, Wear and Love Lingerie.” But larger trends “around being comfortable, athleisure and body positivity” are definitely ascendant, she said.

“We are seeing a lot more of body positive campaigns, pushes for diversity,” she said, and that is contributing to how “ideas of sexy have changed and are changing.” Harrington called Victoria’s Secret’s marketing “tired and stale,” but cautioned against writing the company off just yet. Other big brands, she said, including Chantelle, Natori and Wacoal, also seem behind the times, but are still doing well.

And it’s true that Victoria’s Secret still draws big influencers and retains cultural cachet. The 2018 show, which will air Dec. 2, featured a host of superstar “Angels” and lingerie-clad models, including Adriana Lima, Gigi and Bella Hadid, Kendall Jenner, Karlie Kloss and Winnie Harlow. The Kardashian and Jenner sisters all dressed up as Victoria’s Secret angels for Halloween.

But the brand’s 12-person board of directors has only three women (one is Wexner’s wife), a fact Mette Kurth, a partner at Fox Rothschild, a Philadelphia law firm, said adds to perceptions of the brand being out of touch. (She worked with Frederick’s of Hollywood on its bankruptcy case.)

“Victoria’s Secret’s identity is sexiness, and that very identity is becoming a challenge for them,” she said. “There is the question of whether their management team really connects to the customer. They would do well to have more women in leadership.”

McKean, who had the double mastectomy, said: “Victoria’s Secret’s angels are so stunning. But they are not real. I mean they are real people, but they are not a reflection of how we should look at our bodies and at women.”

Imani, who abandoned Victoria’s Secret after high school, had much less reverence. “I was always averse to the whole ‘you have to worship white women’s bodies’ thing,” she said.

“You don’t have to be a flat stomach to feel beautiful,” Imani added. “I believe that.”