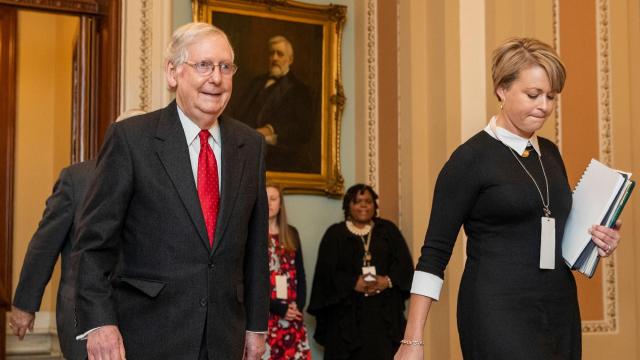 CNN — The impeachment trial is approaching a volatile and unpredictable stage as President Donald Trump's defense team wrapped up its opening argument Tuesday, and the outcome of a looming vote on whether to call witnesses remains uncertain.

While the votes aren't secured yet, Senate Republicans are growing confident they can defeat a vote on witnesses after they feel they weathered the storm on Monday in the wake of revelations from former national security adviser John Bolton's draft book manuscript that Trump told him US security assistance to Ukraine was conditioned on investigations into Democrats, including the Bidens.

The Bolton developments jerked the conversation in the Senate over witnesses into a new direction. But several GOP senators and aides said the White House presentations on Monday helped halt a potential scenario in which a handful Republicans moved sharply toward wanting to hear from witnesses.

After the defense team concluded its argument Tuesday, Senate Republicans huddled in a senators-only meeting to discuss witnesses and the path forward. Senate Majority Leader Mitch McConnell and several Republicans warned that moving ahead with one witness could lead to a number of new witnesses — and there would be no clear path out of the trial, according to a source familiar with the remarks.

A source in the room said McConnell made clear to senators that Republicans don't currently have the votes to block witnesses, but underscored that it is still a work in progress as several GOP senators remain noncommittal on their votes. A Senate GOP source said leadership came away from the meeting more confident they would be able defeat the witness vote.

"We're in a better place than we were, no question," said one Republican senator in the room.

The situation in the Senate Republican conference remains fluid. Two Republican senators, Mitt Romney of Utah and Susan Collins of Maine, have signaled they want to hear from witnesses, including Bolton. Sen. Lisa Murkowski of Alaska says she is "curious" about Bolton's testimony.

But there's no sign of a fourth GOP senator expressing support for witnesses at this point, though several Republicans remain on the fence.

"I think the facts are all out there," said Senate Majority Whip John Thune of South Dakota. "I don't think that anything that he's going to say changes the facts ... I think people kind of know what the fact pattern is."

The President's legal team ignored Bolton's book manuscript through most of the day Monday, until constitutional lawyer Alan Dershowitz took it head on at the end saying the allegations "would not constitute an impeachable offense."

Trump's personal attorney Jay Sekulow took more direct swing at Bolton on Tuesday, saying the impeachment process was "not a game of leaks and unsourced manuscripts."

"Responding to an unpublished manuscript that maybe some reporters have an idea of maybe what it says," Sekulow said. "I don't know what you'd call that. I'd call it inadmissible."

House Intelligence Chairman Adam Schiff, a California Democrat, said it was clear Republicans were "still reeling from the revelation of John Bolton's book and what he has to say, the very relevant and probative quality of the testimony that he should give the Senate."

"I don't think, frankly, that we could have made as effective a case for John Bolton's testimony as the President's own lawyers," Schiff said.

An administration source familiar with White House conversations with Republican senators said that the vote on witnesses is still tough, and that they are "working it hard."

While McConnell told his conference to "take a deep breath," Romney made a pitch to his colleagues for witnesses on Wednesday.

"I think each individual is going to make their own decision and they're not, I don't think they're all settled, as a group, or as individuals as to exactly how they're going to vote," Romney said Tuesday.

Romney also said the an idea that's percolated in Republican circles in recent weeks — that if they're forced to hear from witnesses, it has to be reciprocal — "has some merit."

Senate gets its turn to ask questions

The question of witnesses will be addressed later in the week. McConnell said an agreement had been reached with Senate Democrats to hold two days of questions for senators on Wednesday and Thursday, alternating between a Republican question and a Democratic question. Questions can be directed to either the House managers or the President's team, and Supreme Court Chief Justice John Roberts encouraged lawyers on both sides to try to keep answer to five minutes, following the guidance from the Bill Clinton impeachment trial.

When the question period is done, the Senate's trial rules dictate there will be four hours of debate and then a vote on whether the Senate should seek witnesses and documents. If the Senate defeats that resolution, the trial is likely to head to a quick acquittal.

If the vote succeeds — things could get unpredictable with both sides able to request witnesses.

Republicans who say they're opposed to witnesses said Tuesday that if the Senate wants witnesses, it must be reciprocal — so both the Republicans and Democrats get their witnesses. The Senate can issue subpoenas with a vote of 51 senators.

"If people want witnesses, we're going to get a lot of witnesses," Graham said.

One Republican senator said a majority of the conference was "reassured" by the defense team presentations on Monday, and senators particularly highlighted constitutional lawyer Dershowitz's argument against the two articles of impeachment.

"I think he probably gave a lot more peace of mind to people that were wanting to see how to sort through it, when he made a strong case that each article was ill-founded," said Sen. Mike Braun of Indiana. "And the key thing ... was even if Bolton's revelation in its full form was true, is that impeachable in your opinion? He said no because it imputes motives."

Democrats are continuing to call for Bolton to testify and the Senate to seek notes from Bolton, and Democratic aides say they expect to hammer that point home during the question-and-answer period, which could last up to 16 hours over two days.

"What I've not heard from any of my Republican colleagues is what's the reason not to see John Bolton and how stupid are we all going to look if his book comes out with extraordinarily relevant information 60 days from now and this proceeding is over," said Sen. Mark Warner, a Virginia Democrat.

Democrats also have another goal in mind with the question-and-answer sessions: Defend the Bidens from what they say are unsubstantiated false attacks on the former vice president from the defense team on Monday.

"Among the questions that did that I've been working on with the with my staff are questions just to make it clear what Joe Biden's role has been in this. This stuff that somehow he was involved with this conspiracy — that's a distraction, that's a bright shiny object," said Sen. Tom Carper, a Delaware Democrat.

With the Bolton revelations fresh in their minds — and cognizant that more developments still could be coming this week — Republicans are also drawing up other contingency plans for dealing with the former national security adviser's allegations.

GOP Sens. James Lankford of Oklahoma and Graham touted a plan to make Bolton's manuscript available to senators in a classified setting. But Democrats rejected the notion — Sen. Sheldon Whitehouse of Rhode Island called it a "laugh out loud" proposal.

"They spent days criticizing us going into a secret bunker, and now they want to take a public document and put it in a secret bunker? Whiff of desperation is what I'll call it," Whitehouse said.