Impeachment: What does 'I move to strike the last word' mean?

Washington — The phrase "I move to strike the last word" has been repeated dozens of times during the House Judiciary impeachment markup hearing, leaving many viewers wondering exactly what the statement means.

Some viewers expressed confusion, wondering if something was being stricken from the official record; however, in short layman's terms, the phrase simply means, "I would like to take an immediate turn to speak for five minutes." 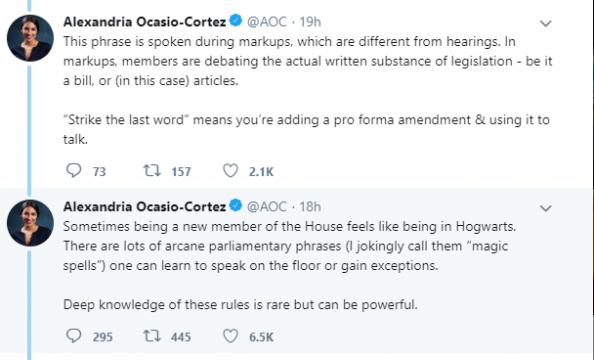 Many representatives have been accused of using the phrase as a loophole to extend the time they are allowed to speak. Typically, for each amendment, representatives have only 10 minutes of allotted debate time – five in favor and five against. However, if they ask to strike even a single word from their speech, the lawmaker will be allowed to continue going for five more minutes.

Essentially, this allows them to keep the debate going indefinitely.

Democratic New York Congresswoman Alexandria Ocasio-Cortez compared the phrase to a magical spell from Harry Potter, which lawmakers can use on the floor to gain exceptions.

Twitter has lit up with posts about "striking the last word." Even celebrities like Rosie O'Donnell have tweeted a question about the phrase. 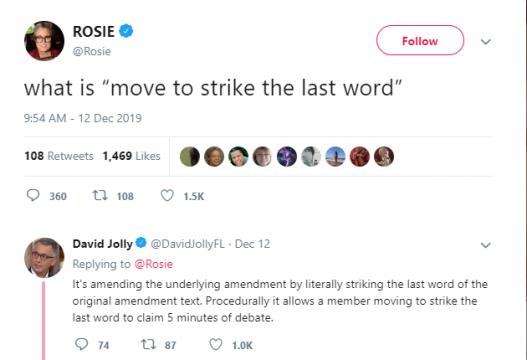 This is likely a new phrase for many viewers; however, by the end of the impeachment markup hearing, viewers will be very familiar with it.