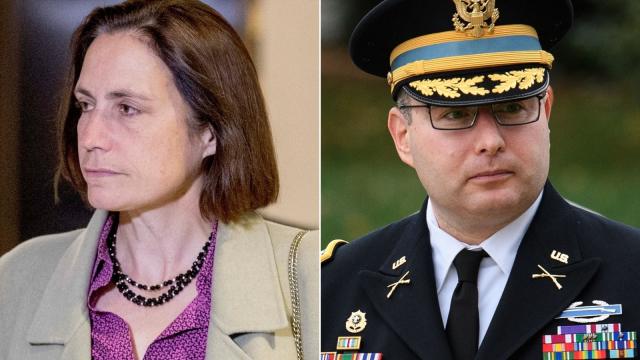 CNN — Two White House officials told lawmakers the "blatant" push for politically motivated investigations from President Donald Trump left "no ambiguity" what the Ukrainians needed to do to secure a highly sought meeting — and the effort was coordinated by acting White House chief of staff Mick Mulvaney, according to deposition transcripts released Friday.

The testimony of National Security Council Ukraine expert Lt. Col. Alexander Vindman and former White House Russia expert Fiona Hill provides new details on the discussions inside the White House ahead of the July 25 call between Trump and Ukrainian President Volodymyr Zelenksy, in which Trump asked the Ukrainians to investigate former Vice President Joe Biden and Burisma, the company that hired Hunter Biden. The officials say they were told that effort was directed by Mulvaney, putting the Ukraine scandal squarely into the office of the President's top aide.

Vindman and Hill testified that US Ambassador to the European Union Gordon Sondland told Ukrainian officials in meetings on July 10 they would have to open an investigation to secure the White House meeting. Sondland told them he was acting at the direction of Mulvaney, who on Friday defied a congressional subpoena and did not appear for a deposition.

LIVE UPDATES: The latest on the Trump impeachment inquiry

"Ambassador Sondland, in front of the Ukrainians, as I came in, was talking about how he had an agreement with Chief of Staff Mulvaney for a meeting with the Ukrainians if they were going to go forward with investigations," Hill testified.

Vindman said there was "no ambiguity" what Sondland was asking of the Ukrainians.

"On the 10th of July ... it became completely apparent what the deliverable would be in order to get a White House meeting. That deliverable was reinforced by the President," Vindman told lawmakers in his closed-door deposition last month. "The demand was, in order to get the White House meeting, they had to deliver an investigation. That became clear as time progressed from how this thing unfolded through the 10th all the way through the conclusion."

Both Vindman, who was on the July 25 call with Zelensky, and Hill expressed significant concerns about the call itself. Vindman reported his concerns to National Security Council attorney John Eisenberg, while Hill testified she was "shocked" at Trump's request for investigations into his political rivals.

"It was pretty blatant," Hill said. "I found that I couldn't really explain that away with an alternate explanation."

The depositions of Hill and Vindman add to House impeachment investigators' growing body of evidence that the push for Ukraine to investigate the 2016 election and Burisma was conditioned on a one-on-one meeting between Trump and Zelensky and the release of $400 million in US security aid that was frozen by the White House. Hill and Vindman provided new details on what the Ukrainians were told in the run-up to the July 25 call and how the White House handled the fallout from the call when the transcript was placed on a more secure server than normal.

House impeachment investigators released Vindman and Hill's deposition transcripts on Friday ahead of public impeachment hearings that will begin next week. The committees have now released transcripts from eight of the 15 depositions they have conducted.

Hill testified behind closed doors last month that she took her concerns about the role Trump's personal attorney Rudy Giuliani was playing in Ukraine to National Security Council attorneys. Hill also testified that then-national security adviser John Bolton described Giuliani's efforts with US Ambassador to the European Union Gordon Sondland in Ukraine as a "drug deal."

Vindman was the first official interviewed by lawmakers in the impeachment inquiry who listened into the July call between Trump and Ukrainian President Volodymyr Zelensky. Vindman said he was concerned about the call and reported it to National Security Council attorneys.

This story has been updated with additional developments and will continue to update Friday.