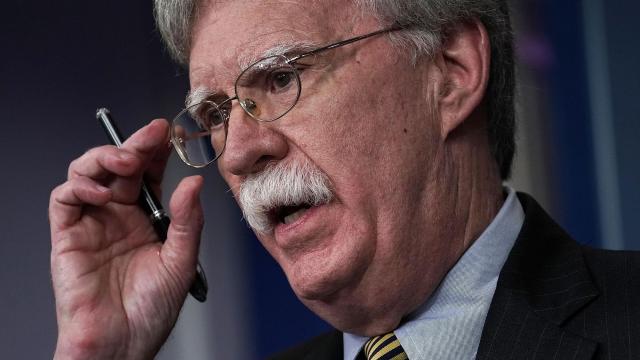 CNN — Democratic House impeachment investigators have invited former national security adviser John Bolton to testify behind closed doors next week, according to two sources familiar with the matter, but his attorney said he won't appear without a subpoena.

The committees have also invited National Security Council lawyer John Eisenberg and his deputy Michael Ellis to appear on Monday, according to the sources.

LIVE UPDATES: The latest on the Trump impeachment inquiry

If he appears before Congress, Bolton would be the most senior witness to testify in the impeachment inquiry to date, and he's at the center of several big events related to the freezing of Ukraine aid and the push for Ukraine to investigate its possible role in the 2016 US election along with Vice President Joe Biden and his son Hunter.

Asked whether he would issue a subpoena to Bolton, House Intelligence Chairman Adam Schiff would not say. "We certainly hope that he will cooperate. He obviously has very relevant evidence to provide," the California Democrat said.

But just minutes after Schiff's comments to reporters, Bolton's attorney Charles Cooper told CNN that his client would not appear at a deposition without a subpoena.

Even if Bolton receives a subpoena, it's not clear whether he would testify. Bolton's former deputy, Charles Kupperman, defied a subpoena on Monday and did not appear before the committees, after he filed a lawsuit asking a judge to rule whether he has to comply with the subpoena since the White House has argued the investigation is illegitimate.

Bolton and Kupperman have the same attorney, Cooper.

Bolton and Eisenberg have emerged as key figures in the testimony provided by administration officials so far detailing President Donald Trump's approach to Ukraine.

Bolton encouraged officials to elevate the concerns, according to Hill's testimony, concerned at Trump's reliance of Rudy Giuliani to handle Ukraine policy.

Eisenberg was responsible for the decision to place the rough transcript of Trump's phone call with Ukraine's President in a highly secure server. And he was among those inside the White House who first learned a whistleblower had filed a complaint about the Ukraine matter.

It's not likely that Eisenberg, nor his White House counsel colleague Ellis, will appear for their requested appearances. Their office wrote the legal memo spelling out the administration's plans to refuse to cooperate with lawmakers as the impeachment inquiry proceeds.

The push to bring in Bolton is also a potential signal that the deposition phase of the investigation is nearing a close, as Democrats prepare to shift to public hearings.

House Foreign Affairs Chairman Eliot Engel said Wednesday that the committees have not yet issued a subpoena for Bolton to testify, but if Bolton does not appear voluntarily, it's "something that we would consider."

"I've always found him to be very straightforward and honest about what he believes," the Democrat from New York said.