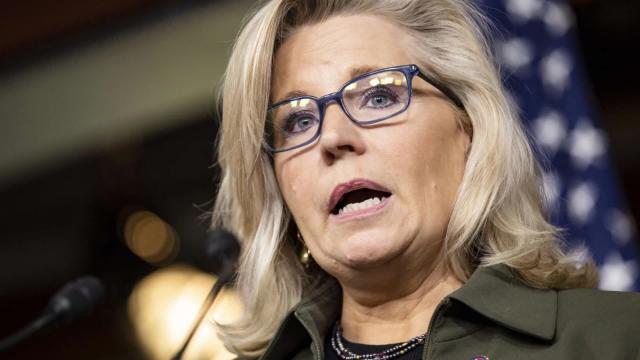 CNN — Multiple House Republicans announced Tuesday evening they would support the impeachment of President Donald Trump for his role inciting last week's riots as congressional Republicans made their clearest break with Trump to date after he showed no remorse for last week's US Capitol mob.

While the vast majority of House Republicans are expected to oppose the article of impeachment on Wednesday, there are expectations there could be as many as 10 -- maybe more, maybe less -- breaking ranks, according to House GOP aides.

The first impeachment backers included the House's No. 3 Republican, Rep. Liz Cheney of Wyoming, in a remarkable rebuke with a President who has been unassailable in the House GOP conference throughout his four-year term. While House Minority Leader Kevin McCarthy is opposed to impeachment, House Republican leaders are not lobbying their members to oppose it, and Cheney told the conference Monday it was a "vote of conscience."

In another potentially significant blow to Trump, Senate Majority Leader Mitch McConnell has indicated that he believes that impeaching Trump will make it easier to get rid of the President and Trumpism from the Republican Party, according to a source with knowledge of the matter.

The scurrying away from Trump in the hours before the House will vote to impeach him Wednesday is the fiercest pushback the President has faced from Republicans since he was a GOP primary candidate who party leaders believed would fade away.

The GOP strategy on impeachment is a marked departure from the approach in 2019 when Republican leaders pushed their members to fall in line and no GOP House lawmakers defected. It shows the splintering of the GOP and how the party is deeply divided over how to respond to Trump after he incited last week's deadly Capitol riot.

Rep. John Katko of New York was the first Republican to publicly state he would vote to impeach Trump, saying in a statement Tuesday he supported impeachment because the President needed to be held accountable for his actions.

"To allow the President of the United States to incite this attack without consequence is a direct threat to the future of our democracy. For that reason, I cannot sit idly by without taking action. I will vote to impeach this President," Katko said on Twitter.

Cheney quickly followed with a statement of her own, offering some of the harshest criticism of Trump for his role inciting the rioters.

"The President of the United States summoned this mob, assembled the mob, and lit the flame of this attack," Cheney said. "Everything that followed was his doing. None of this would have happened without the President. The President could have immediately and forcefully intervened to stop the violence. He did not. There has never been a greater betrayal by a President of the United States of his office and his oath to the Constitution."

Democrats are nearly united in their belief that the President deserves to be impeached and removed in the fallout of the pro-Trump rioters that breached the Capitol and put the lives of lawmakers -- and Vice President Mike Pence -- in danger on January 6. The House will first vote on a measure Tuesday evening urging Pence to invoke the 25th Amendment to remove Trump from power, which could signal how many Republicans will back impeachment.

Then on Wednesday, the House will take up a resolution and vote to impeach Trump for "incitement of insurrection."

Trump's impeachment for the second time in 13 months -- which would make him the first President in history to be impeached twice -- appears to be a foregone conclusion. The only question is how many House members vote in favor of removing the President from office eight days before President-elect Joe Biden will be sworn in.

Republicans tried to offer an alternative to impeachment, such as a censure vote, arguing it could win more bipartisan support than an impeachment occurring just one week after the riots. But House Speaker Nancy Pelosi told her caucus Monday that censure was a nonstarter, and Democrats are not considering any off ramps to avoid a second impeachment.

In the Senate, which would hold a trial if Trump is impeached, McConnell has been silent since the events of January 6, a deliberate decision that leaves open the option of supporting impeachment. The New York Times first reported McConnell's thinking.

Another person with direct knowledge said there's a reason McConnell has been silent on impeachment as other Republicans have pushed back: He's furious about what happened January 6, even more so that Trump has shown no contrition.

Trump made his first comments on the looming impeachment vote and the Capitol riots on Tuesday, railing against impeachment as a continued "witch hunt" and taking no responsibility for his comments leading up to the riots.

"On the impeachment, it's really a continuation of the greatest witch hunt in the history of politics. It's ridiculous, it's absolutely ridiculous," Trump told reporters on the White House South Lawn Tuesday on his way to Alamo, Texas. "This impeachment is causing tremendous anger, and you're doing it and it's really a terrible thing that they're doing."

Trump took no ownership for inciting the riots last week. "It's been analyzed," he said of his remarks. "People thought what I said was totally appropriate."

Democrats, furious over the events of January 6, have coalesced around impeachment quickly as the only proper response to the President's repeated lies about the election being stolen from him that whipped up his supporters -- to the point where that they tried to stop the peaceful transfer of power by invading the Capitol while the Electoral College votes were being counted.

"This was a brutal and violent attack on our democracy, and Donald Trump incited this by promoting the big lie that he, in fact, won the election by millions of votes but it was stolen from him," Rep. David Cicilline, a Rhode Island Democrat and one of the authors of the impeachment resolution, said on CNN's "New Day" on Tuesday. "We'll demonstrate unequivocally that the President's language, the statements he made, the promotion of the big lie made violence at the Capitol inevitable. He's responsible for it. He needs to be removed from office immediately. he's a clear and present danger to the United States."

The procedural steps ahead of the impeachment vote began Tuesday in the House Rules Committee, which debated the 25th Amendment resolution sponsored by Democratic Rep. Jamie Raskin of Maryland that will be voted on Tuesday evening.

The Rules Committee meeting was the first chance for Democrats and Republicans to engage on the riots since they occurred last week, and Democrats alternated between telling personal stories about the danger they faced and clashing with the Republican lawmaker opposing the resolution, Rep. Jim Jordan of Ohio. House Rules Chairman Jim McGovern repeatedly called on Jordan to say that Biden won the election fairly, but Jordan would not do so, saying only that Biden won while urging Congress to investigate questions about election irregularities.

"President Trump committed a high Crime and Misdemeanor against the Nation by inciting an insurrection at the Capitol in an attempt to overturn the results of the 2020 Presidential Election," the report says. "The facts establish that he is unfit to remain in office a single day longer and warrant the immediate impeachment of President Trump."

The House will vote late Tuesday evening on Raskin's resolution, before taking up the impeachment resolution at 9 a.m. ET Wednesday.

House and Senate Democrats have still not finalized plans for what to do after the House impeaches Trump. Senate Minority Leader Chuck Schumer, who will become majority leader on January 20 when Biden and Vice President-elect Kamala Harris are sworn in, giving Democrats the tiebreaking vote in a 50-50 Senate, is trying to use a rare procedural tactic to bring the Senate back before January 20 -- a 2004 resolution allows Schumer and McConnell to avoid the requirement for unanimous consent during an emergency. But that would require cooperation from McConnell, who said the Senate will not return before January 19.

"We could come back ASAP and vote to convict Donald Trump, and get him out of office now before any further damage is done," Schumer said at a news conference in New York.

"The bottom line is that Leader McConnell has the ability to call us back into session," added Schumer. "And we can then move to convict Donald Trump in the impeachment trial and try him. And that's what we hope McConnell will do."

McConnell's office did not comment on Schumer's demand. If McConnell does not agree, Schumer and the incoming Biden team are preparing to split the Senate's days for an impeachment trial: Working to confirm Biden's Cabinet and pass legislation in the morning, and conducting the trial beginning at 1 p.m. ET each day, as the Constitution requires, in the opening days of Biden's presidency.