DreamACTivist.org, a group formed by undocumented youth to protect their rights under the so-called "Dream Act," which allows young people brought to the U.S. illegally to live, drive and work without the threat of deportation, posted video of a man stepping out of a white van and talking to a man about immigration policy.

"I don't make the laws in this country. My job is to enforce them," says a man in the video dressed all in black with an apparent bullet-proof vest.

Bryan Cox, an ICE spokesman based in New Orleans, told WRAL News that the agent in the video is “clearly branded.” The words "POLICE" and "ICE" are visible, big and bold across the back of the man's shirt.

"ICE is a non-uniformed agency. So anyone asking the question ‘Why isn’t this person dressed in uniform?’ There is no ICE uniform," Cox said. 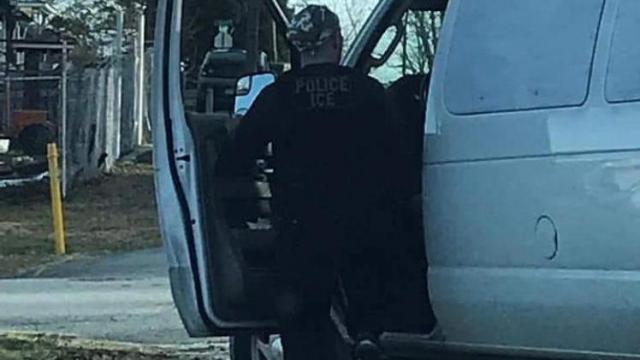 DreamACTivist claims the video was shot in Hendersonville on Wednesday. They posted it along with a petition to Gov. Roy Cooper to oppose the actions. The petition reads, in part:

"These immigrants have lived in the U.S. for decades, and should not be targeted in this way.

This coming just after the raids that hit Sanford, NC, shows that our state is on the radar of the Trump Administration, and we need you to join us in showing a united front to these senseless attacks." 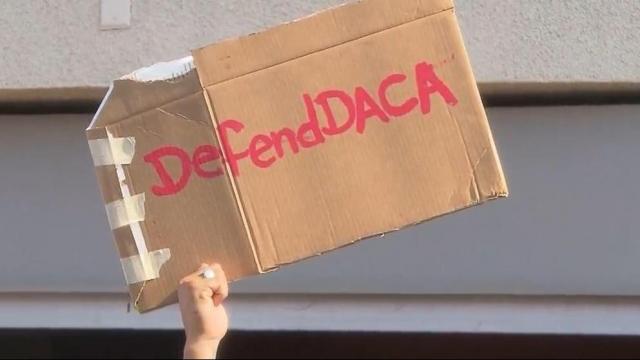 Alerta Migratoria NC, another group that supports undocumented immigrants and opposes deportations, shared the video on their social media.

"I see ICE impersonating members of our community to trick and deceive," said Viridiana Martinez of Alerta Migratoria NC. "People are terrified. People are terrorized. If that’s what ICE wanted to achieve, they certainly have."

"It’s entirely consistent with federal law and agency policy as well as the practice of multiple law enforcement agencies to conduct enforcement in plainclothes, non-marked vehicles.

"I would say there’s absolutely nothing wrong with blending in, just as is standard practice with multiple other law enforcement agencies," he said.

On Thursday, seven North Carolina mayors, including those from Durham, Chapel Hill and Carrboro, posted an open letter to state "our unwavering opposition to the ICE raids that have swept North Carolina in recent days." They wrote, "We call on ICE officials to cease such raids in the future. These raids are detrimental to the welcoming, stable, loving communities that we work every day to build."

Last week, after more than 200 people were arrested in various "targeted enforcement" actions, including 27 taken into custody at a Sanford gun manufacturer, Sean Gallagher, who oversees U.S. Immigration and Customs Enforcement offices in the Carolinas and Georgia, said the raids were the new normal, a result of sheriffs in Wake, Durham, Orange and Mecklenburg counties who have elected not to cooperate with federal immigration efforts.

Wake County Sheriff Gerald Baker and Durham County Sheriff Clarence Birkhead both stopped recognizing immigration detainers and holding people in jail for ICE shortly after they took office in December. Baker also pulled Wake County out of the federal 287(g) program in which local law enforcement agencies work with ICE to check the immigration status of people charged with crimes.

"Some of the dangerous policies that some of our county sheriffs have put into place ... really forces my officers to go out onto the street to conduct more enforcement operations," Gallagher said at a news conference. "We don't want to be out doing this at-large enforcement. It's much more dangerous for my staff, the general public and those being arrested."

"The public would be shocked at the types of individuals these sheriffs are releasing back into the country. This is politics over public safety at its worst," Gallagher said. "Regardless of the fact whether these sheriffs will work with us, we will be out there continuing to protect the citizens of these counties."

"The intent of ICE officers is to conduct their targeted enforcement of federal immigration law," he said.

"More than 90 percent of the persons arrested by this agency last year were either a convicted criminal or had pending criminal charges."