Raleigh, N.C. — Former Gov. James B. Hunt Jr. called for greater grassroots involvement in democracy as national and state leaders in politics, technology, design and public policy gathered at the Redesigning Democracy Summit to brainstorm ways to understand and improve citizen engagement in the democratic process in the United States.

"We need to fix it," said Hunt, chairman of the Institute for Emerging Issues at North Carolina State University. "We must redesign it if we're going to keep it, in my opinion."

Lessons learned from the 2012 campaign season were the topics of the Sunday night panel discussion with Grover Norquist, president of Americans for Tax Reform; Joan Blades, co-founder of MoveOn.org; Lee Rainie, director of the Pew Center's Internet & American Life Project; and Matt Motyl, founder of CivilPolitics.org.

"We can make democracy work from the grassroots up, involving all of the people," Hunt said.

Americans are more polarized than at any time in Pew's polling history, and their trust all public institutions except for the military has dropped in the 21st century, Rainie said.

While the Internet has expanded the "zone of argumentation," he said, social media have enabled people outside of the elite to participate in the political process. Blades said she's seen that in her work with MoveOn.org and MomsRising.org.

The two political parties have solidified diverging visions of America and the role of government, Norquist said. Moytl said that when discussing politics, people should seek to understand different viewpoints, rather than to persuade others.

The panelists debated whether democracy could be strengthened by having multiple political parties, making election day a holiday, and increasing civics education in high school, among other ideas.

"People are turning away from public life," said Hunt. "It is important that we find ways to bring new ideas and citizens into our efforts to work together." 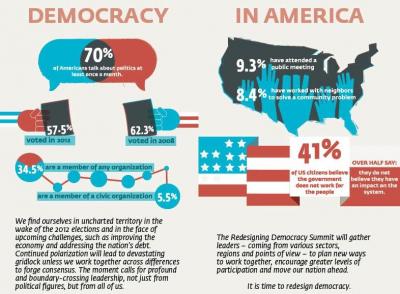 The IEI is hosting a cross-section of invited speakers representing various regions and political agendas, who are sharing creative, promising practices and discovering new ways to encourage citizen participation.

"There is so much at stake. As global dynamics, emerging technologies and social patterns change our national landscape, we face complicated challenges,” said IEI Director Anita Brown-Graham.

The public is invited to participate in the event using Twitter (#RDS12).