Raleigh, N.C. — For more than 30 years, Tommy Midyette has painted iconic Raleigh scenes, landmarks and people, preserving the stories of our city in layers of paint.

"Back then - there weren't many good paintings of Raleigh landmarks," said Midyette, who grew up in Raleigh.

"Recently I did a painting of Hayes Barton Methodist Church. I've done two or three paintings of Broughton - you know people really want that," he said.

He's painted nostalgic scenes like Krispy Kreme -- both during the day and at night, with that iconic red sign glowing in the dark.

One of his most popular subjects is the biggest city landmark of all: The downtown Raleigh skyline.

"My realistic oil painting of Raleigh that's in "Our State" magazine - was one of the first ones I tackled," Midyette said. If you look closely, you'll see a little CAT bus driving into downtown, an intentional addition by the artist. Those little extra touches are what makes his paintings truly reflect the spirit and culture that makes Raleigh.

He's painted the city in a variety of ways:

On a starry night.

In black and white. 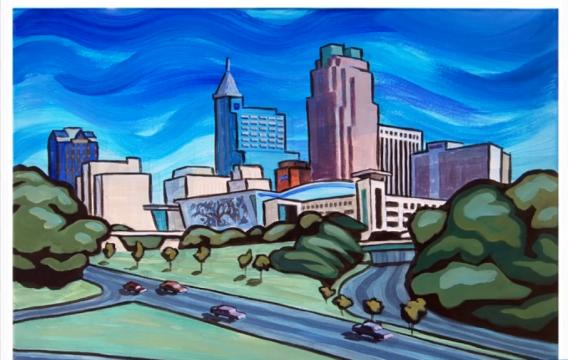 Midyette said, "You know, it would probably be smarter if I stuck to one style and just did it over and over again, and get known for that, but I like trying a variety of looks."

"You know, you've got to get a likeness of people - and flatter than as well. I want it to not look exactly like a photo," said Midyette.

Midyette's realistic painting of Raleigh's city skyline will appear in the February issue of "Our State" magazine.