Ice Surveys and Neckties at Dinner: Here’s Life at an Arctic Outpost 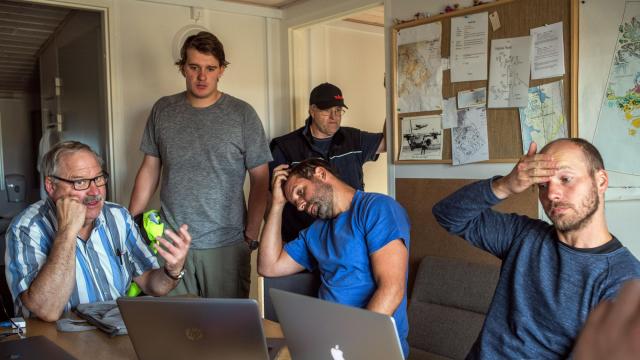 For the past 40 years, thanks to satellite measurements, scientists have known that sea ice coverage in the Arctic is shrinking. Global warming has reduced the extent of ice in the region in summer, when it is at its lowest, by nearly 13 percent a decade. That has led some researchers to predict that the Arctic could be ice-free in summers by the middle of the century.

But ice extent is only part of the story. Scientists want to know thickness, too, because together with extent that tells them the total volume of ice in the Arctic.

Average thickness has also declined sharply, as melting of multiyear ice leaves a greater proportion of thinner, first-year ice. Winds and currents can also move more older ice out of the Arctic.

Measuring the thickness of sea ice is trickier than measuring its extent. There’s a European satellite, Cryosat-2, that can do the job using radar to determine ice elevation and therefore thickness. But Cryosat-2 works best in winter; in summer, when the ice is melting, it has difficulty distinguishing between ice and open water. ICESat-2, a NASA satellite that was launched in September, will provide even more precise thickness data but will have similar summer limitations.

To fill the data gap, some governments and other groups have conducted summer measurement campaigns from aircraft. The latest was undertaken in late July and August by researchers from the Alfred Wegener Institute, which is based in Bremerhaven, Germany.

Operating from Station Nord, a small Danish military and scientific outpost in Greenland, about 575 miles from the geographic North Pole, the researchers measured ice thickness in the Arctic Ocean and in the Fram Strait, which separates Greenland from the Norwegian archipelago of Svalbard.

The Wegener institute program, which is led by Thomas Krumpen, a sea-ice physicist, employs an electromagnetic device similar to a metal detector. It uses the difference in electrical conductivity between ice and seawater, coupled with precision elevation data measured by a laser scanner, to determine thickness.

The institute has been using such detectors since 2002, first on a sledge that traveled across the ice and then suspended from a helicopter. But in those cases the area that could be covered was limited.

“In order to get representative measurements of sea ice, you need to cover large distances,” Krumpen said.

Beginning in 2011, the torpedo-shaped device, called the EM-Bird, has been used from a plane. Suspended by a cable just 70 feet above the surface while the plane, a rebuilt and extensively modified DC-3, flies a few hundred feet higher, it can take measurements over a much wider area.

But the low-altitude flights require a lot of planning, and good visibility is a must. So the Wegener team — which this summer included two pilots, an engineer, a mechanic and another scientist in addition to Krumpen — spends a lot of time discussing the weather.

“For this kind of flying, the key is good forecast data,” he said. “It’s all about finding the best spot to go to make the operation as safe as possible.”

Station Nord is staffed by six soldiers on two-year tours. They are alone and isolated from October to March; two dogs, once part of a sled patrol, keep them company. Scientists begin to visit in the late winter — in addition to this summer’s campaign, the Wegener sea-ice team was there last March, as were researchers studying black-carbon pollution and other issues.

Like any remote outpost, there are quirky rules and rituals, including an annual pig roast followed by an Arctic version of medieval games, and the requirement that everyone wear a shirt and tie to dinner on Saturday nights.

Warm temperatures across much of the Arctic this summer often led to less-than-ideal flying conditions. Still, over a little more than two weeks, Krumpen’s team completed nine survey flights, including one that reached within about 150 miles of the North Pole.

“Given the weather situation I’m actually pretty happy,” he said.

Preliminary analysis of the data shows that, although ice thickness varies considerably year to year, the downward trend continues. Average thickness of undisturbed ice in the areas surveyed this summer was a little less than 5 feet, down from more than 7 feet in the mid-2000s.

“It’s still much lower than it used to be,” Krumpen said.