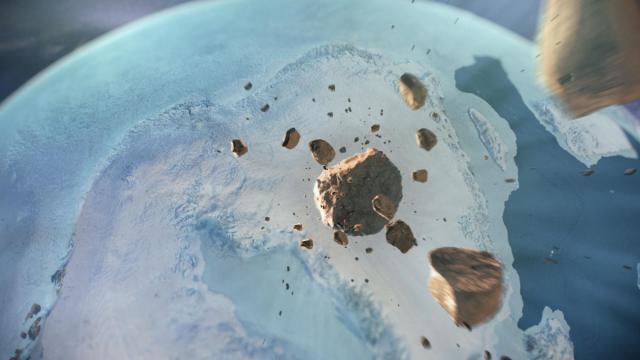 Buried beneath a half mile of snow and ice in Greenland, scientists have uncovered an impact crater large enough to swallow the District of Columbia.

The finding suggests that a giant iron asteroid smashed into what is today a glacier during the last ice age, an era known as the Pleistocene Epoch that started 2.6 million years ago. When it ended only 11,700 years ago, megafauna like saber-toothed cats had died out while humanity had inherited the Earth.

The discovery could lead to insights into the ice age climate, and the effects on it from the eruption of debris that would have resulted from such a cataclysmic collision.

“This is the first impact crater found beneath one of our planet’s ice sheets,” said Kurt Kjær, a geologist at the Center for GeoGenetics at the Natural History Museum of Denmark and lead author of the study, published Wednesday in the journal Science Advances.

In 2015, Kjær and a colleague were analyzing a NASA map of Greenland when they noticed an enormous circular depression on the Hiawatha Glacier at Greenland’s northwest tip.

“There was a hidden landscape starting to take shape,” said Kjær. “We looked at it and said, ‘What is that?'”

At that moment Kjær thought about the carsize meteorite on display in the courtyard near his office in Copenhagen, which had coincidentally been recovered from the northwest of Greenland. He and his colleague joked that perhaps the circular structure was a crater left by an asteroid.

After the laughs subsided, they realized their suggestion might not be far-fetched. “There’s only so many ways you could create a circular feature beneath an ice sheet,” said Kjær.

For three days in May 2016, his team flew over the crater in a German airplane with ice-penetrating radar, drawing imaginary grid lines across the surface.

John Paden, a radio-glaciologist at the University of Kansas, operated the radar on the flight. Every second it sent 12,000 radio wave pulses down into the ice, reflecting off the ice layers and allowing the team to measure the thickness, structure and age of the ice sheet.

The aerial survey confirmed there was a huge pit with an elevated, circular rim and uplifting structures in the center, all telltale signs of an impact crater. The team’s analysis showed that the Hiawatha crater was nearly 1,000 feet deep and 20 miles in diameter, placing it among Earth’s 25 largest impact craters, although much smaller than the 90-mile crater left by the dino-busting Chicxulub impact.

“Once you start looking for structures beneath the ice that look like an impact crater, Hiawatha sticks out like a sore thumb,” said Joseph MacGregor, a glaciologist at NASA Goddard Space Flight Center in Maryland and a co-author of the study.

The bowl of the crater presses right against the edge of the glacier, giving the wandering ice sheet a semi-circle-like appearance that is visible from above. Breaking out from that semicircle is a white tongue of ice, a large river containing sediments from the bottom of the ice sheet.

Kjær ventured to the floodplain via helicopter and collected sediment. He found what he said were pieces of highly shocked quartz, which signaled that a violent impact had occurred at some time in the area’s history. The area’s sediments also had high concentrations of nickel, cobalt, chromium, gold and platinum, an indicator that the meteorite was made of iron.

Because the team has not yet searched for ejected material from the impact in ice cores, they cannot establish an accurate date for the impact, beyond saying it occurred during the Pleistocene. Their next steps are to determine whether the asteroid smashed into a glacier or an area that was subsequently covered by ice, and to assess the climatic effects of the impact.

Kjær still wonders if the meteorite in the courtyard outside his office, which was found about 200 miles away from the Hiawatha crater, may hold clues to better understanding the ancient impact.

“Even though we have looked into the planet’s surface so much, with every type of equipment,” said Kjær, “the Age of Discovery is not over yet.”