Chapel Hill, N.C. — A Chapel Hill woman was surprised when she received a letter and gift cards in the mail congratulating her on her pregnancy. She didn't recognize the sender -- and she is not pregnant.

Katie Kelly said the suspicious letter stood out in her mail.

"I saw I had a pink envelope," she said. "At first, I thought it was a late birthday card, because my birthday was a couple weeks ago. I was so excited to open it, but I noticed it didn’t have a return address." 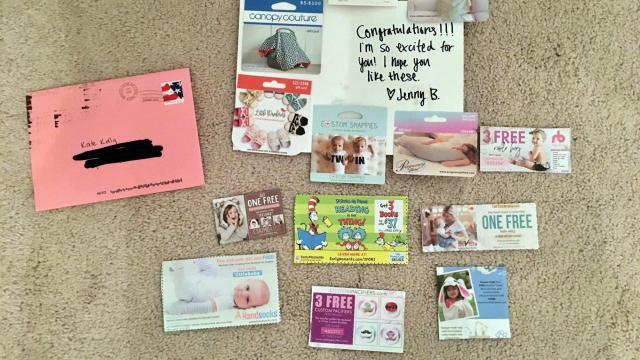 Inside the envelope, Kelly found $245 worth of gift cards for pregnancy and motherhood items and a note from someone named Jenny B.

The front of the card featured a colorful illustration of an avocado. It read, "Holy guacamole, you're going to 'avo' baby."

Inside, what appears to be a handwritten message from Jenny B. reads, "Congratulations!! I'm so excited for you! I hope you like these."

On closer inspection, the message is printed.

Kelly said she suspects the sender wanted her to visit websites and put in her personal information in order to use the gift cards.

She believes the card is a scam and wants to warn others.

"It’s really important that people don’t fall for something like this, even though it looks like a great gesture, because they could end up in a really bad situation," she said.

Kelly, who works as an Irish dance teacher, said she recently used her computer to search for girls' costumes.

"I think because my computer history shows that I’ve been looking at kids’ clothing for the past couple of weeks, someone must have gotten my information through there," Kelly said. "I would guess that’s how I got selected for one of these cards."

Kelly said she didn't try to use the gift cards, but she is worried that women who are pregnant might try to do so. When she posted a photo of the card on social media, several women she knew reached out and said they received the same thing.

FOX19 in Cincinnati confirms women all across the country have received the odd letters and gift cards from Jenny B.

WRAL News reached out to the company listed on the gift cards, Mothers Lounge LLC, but has not received a reply.