"I could have been killed:" Loose metal debris strikes woman's car on I-40 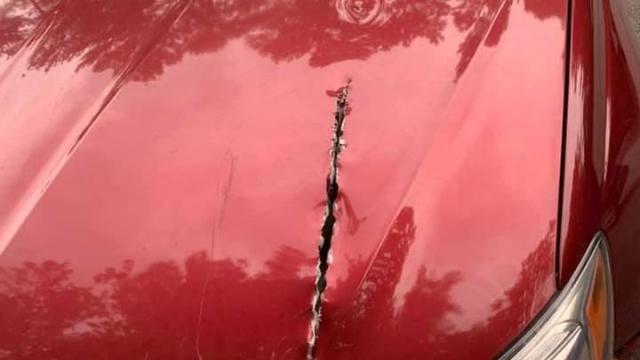 Raleigh, N.C. — A Clayton woman was driving down Interstate 40 West around 9 a.m. on Thursday when her car was hit with debris from the highway.

Jessica Auer describes the debris as a thin piece of some kind of metal, around 12 inches long.

"I didn’t realize the material at the time, but the way it ripped through my hood it had to be some sort of metal," she said.

Auer said she's used to trash items like cardboard, plastic and styrofoam flying up onto her car on I-40 – so the sudden jolt and immediate damage from this debris was shocking.

"I heard the big boom and saw the hole it left. The debris took a lucky bounce over my car and didn’t smash through the windshield, which it easily could have. Someone else could have not been to lucky," she said.

"It could have killed me," she said.

The incident took place between Exits 295 and 293, according to Auer.

Response from the NC DOT

Steve Abbott, spokesman for the North Carolina Department of Transportation said, "As soon as we are alerted to something being in a roadway that could be dangerous and a safety hazard, we head out and get it."

However, he cautioned, the key is that someone has to tell them about it.

"Whether law enforcement is seeing it, a driver calling 911, a DOT employee driving through and seeing something, or even media," Abbot said.

He said he would like to see people take personal responsibility for strapping items down on their vehicles – or at least calling a warning into the NC DOT if an item falls loose in the highway.

Loose items falling from trucks, he said, are an ongoing issue and a major cause of trash on the road.

"In her case, " he said, "It could have fallen off a vehicle just moments before she got hit. If it was lying in the road for a while, one would think other vehicles would have hit it and hopefully contacted 911."