'I always joke that he won the lottery when he met me, but now we actually did' 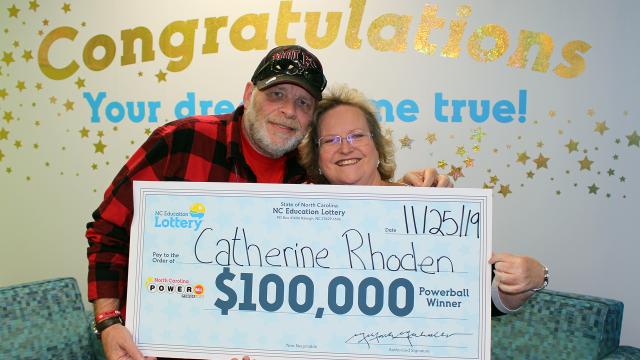 Raleigh, N.C. — For Catherine Rhoden of Creedmoor, a trip to the grocery store with her boyfriend to get barbecue fixings turned into a $100,000 Powerball win.

"We’ve only been dating for three months," Rhoden said. "I always joke that he won the lottery when he met me, but now we actually did. I never played the lottery before I met him. He’s definitely my good luck charm."

The office manager’s good luck started last Wednesday night, when she stopped at the Harris Teeter on St. Albans Drive in Raleigh to get groceries. While there, she and her boyfriend, Bill Dampman, bought a $3 Power Play ticket for that night’s drawing.

Her ticket matched numbers on four of the white balls and the Powerball to win $50,000. The prize doubled when the 2X multiplier was drawn.

She claimed the prize Monday at lottery headquarters. After required state and federal tax withholdings, she took home $70,751.

Rhoden said she plans to use some of the money to fix her broken well and then she wants to make a donation to Toys for Tots and St. Jude Children’s Research Hospital.

"We’ve been blessed, very blessed," she said. "We want to be able to pay it forward."

The jackpot for Wednesday’s Powerball drawing is $100 million, or $68.9 million cash.