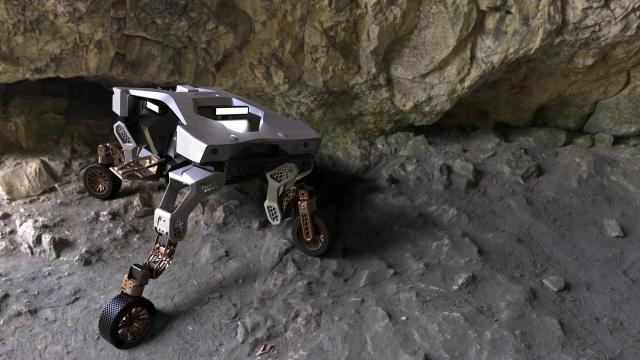 CNN — Sometimes, no matter how good an off-road vehicle is, there are places it just can't drive. That's why Hyundai engineers are working on a vehicle that can traverse even the most difficult terrain.

The Hyundai Tiger X-1 has four wheels, each powered by an electric motor. Each of those wheels is on the end of a long, bendable leg. The autonomous vehicle will drive as far as it can on its wheels, but, when it encounters obstacles it can't drive over, it will rise up on its legs and walk over them. The legs can also bend as the wheels roll over uneven terrain, keeping the cargo area level. The vehicle can also drive in any direction -- forwards, backwards or side to side -- using either its wheels or legs.

Hyundai envisions it being used for difficult rescue operations following natural disasters such as earthquakes. A sort of autonomous walking cargo carrier, it's not designed to carry people, only supplies.

The Tiger (which stands for Transforming Intelligent Ground Excursion Robot with "X-1" indicating its experimental nature), could also connect to an unmanned aerial drone that can carry it to and from remote locations, Hyundai said. The Tiger and drone could also charge one another's batteries as needed.

This concept vehicle is similar to the Hyundai Elevate, another walking concept vehicle which was unveiled as an animation at the 2019 Consumer Electronics Show. The Elevate concept art showed a larger vehicle designed to carry people, though.

This cargo-only Tiger will require at least another five years of development and testing before it's ready for real-world use, according to Hyundai. A vehicle like like the Elevate that could safely carry people will take longer.

The Tiger is being developed by Hyundai's California-based New Horizons Studio, a division of Hyundai Motor Group that design vehicles that can go places ordinary cars and trucks cannot.

Vehicles like this could be used to explore the surface of the moon or other planets, said John Suh, director of the New Horizons Studio. They could also be used as taxis with their legs raising and lowering the vehicle to make it more accessible to people in wheelchairs, he said.

Hyundai is in talks to take a controlling interest in the robotics company Boston Dynamics, but Hyundai executives said Boston Dynamics was not involved in this project. Instead, Hyundai worked with the design software company Autodesk and Sundberg-Ferar, a vehicle concept firm.