Raleigh, N.C. — A pair of shootings about 7 miles apart in Raleigh on Friday left two men dead and the wife of one of them wounded, police said.

Police responded to the 2600 block of Westinghouse Boulevard, off Capital Boulevard north of Interstate 440, at about 3 a.m. after someone reported hearing gunshots. When they arrived, officers found two people with gunshot wounds. 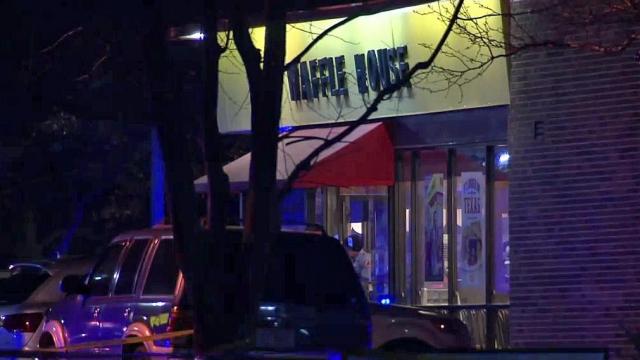 A man told a 911 dispatcher that he was southbound on Capital Boulevard when someone pulled alongside his car and brandished a gun, according to a recording of the car released Friday afternoon.

The dispatcher keeps telling him to pull off and let the gunman pass, but the caller says he doesn't want to stop and that the other car won't pass him.

The caller eventually agrees to stop at the Waffle House on Westinghouse Boulevard to meet a police officer, and shouting and a woman's screams can then be heard on the recording. After about six minutes of screaming and sobbing, the woman can be heard saying, "That was my husband."

On Friday afternoon, police identified the gunman as Jason Maurice Griffith, 51, of Raleigh.

Emma Griffith was married to Jason Griffith, according to her friends.

Co-workers at Capital Ford posted a memorial to Jason Griffith inside the dealership, which is a couple of miles from the Waffle House. 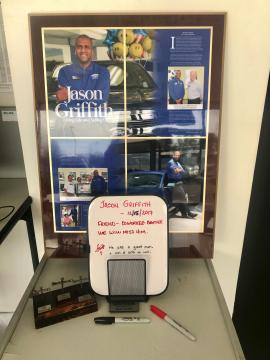 "The entire Capital Auto Group is shocked and saddened by this horrible tragedy. Our thoughts and prayers go out to everyone who was impacted," spokesman Mark Roberts said in a statement.

Friends of Jason Griffith were stunned by news of the shooting and his death, calling him a good guy with a strong faith. He was a minister, they said, although it was unclear if he worked for a specific church.

They also noted that some of his family members are buried at Carolina Biblical Gardens.

"I'm just in total disbelief. I feel completely numb on the inside," said Fern Powell Hockaday, who said she has known Jason Griffith for most of her life. "He loved his wife. I just don't know what happened, and I'm just sick."

Patrice Fields grew up with Jason Griffith in Raleigh.

"He was just a sweet, funny kid," she said, "and he grew up to be a kind, hardworking young man."

"We're in shock. This is heartbreaking because he was such a good guy."

Police have not officially released what led up to the shooting.