Hurricanes could bring another disaster: Foreclosures 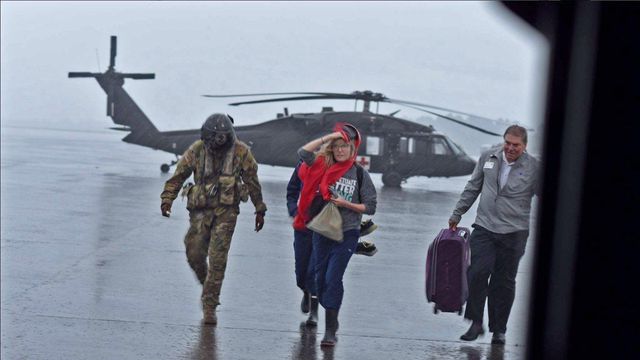 NEW YORK (CNNMoney) — As life slowly returns to normal in hurricane-ravaged parts of Texas, Florida and Puerto Rico, housing experts and consumer advocates worry another crisis is on the horizon: Foreclosures.

Already, legal aid groups are working with people who are struggling to make mortgage payments on homes made uninhabitable by the storms, while paying rent somewhere else.

Although most mortgage lenders are offering grace periods for homeowners in disaster zones, the real trouble begins when those grace periods run out.

"I'm anticipating a wave of problems coming in February," said Amir Befroui, a foreclosure specialist for Lone Star Legal Aid based in Houston. "It's going to get worse before it gets better. We're in the calm before the storm."

Roughly 4.8 million mortgaged properties were in the paths of Hurricanes Harvey, Irma, and Maria, representing nearly $746 billion in unpaid principal balances, according to financial data firm Black Knight. In September, the number of loans that were more than 30 days past due rose 48% in Irma-affected areas and 67% in Harvey-affected areas, Black Knight found. The firm has not run the numbers for Puerto Rico yet.

Consumer advocates and government agencies are now trying to prevent those delinquencies from turning into lost homes and broken neighborhoods.

Soon after the storms hit, government-backed mortgage giants Fannie Mae and Freddie Mac instituted a three-month suspension of foreclosure sales, late fees and credit score reporting, and allowed mortgage servicers to work out forbearance plans that could delay payments for up to a year.

Those measures help, but historically haven't been enough to solve the problem.

After Hurricane Sandy hit New York and New Jersey, homeowners still had trouble resuming payments once their forbearance period ended, according to a 2013 report by Legal Services NYC.

For many, months of postponed payments were suddenly due all at once after that grace period ended, creating an insurmountable burden.

The other problem: Mortgage servicers tend not to release insurance payments until homeowners have a contractor lined up to make repairs. That's a daunting task at a time when construction companies have months-long waiting lists due to a surge in demand, and homeowners need money immediately in order to clean out their homes and avoid further damage.

"You just have to go through this really bureaucratic process just to get some funds flowing," said Joseph Sant, director of homeowner services for the non-profit Center for New York City Neighborhoods. "When there's a disaster on a large scale, mortgage servicing companies are an integral part of the recovery process. After Sandy, they were just not ready to play that role."

In New York, state regulators worked with Fannie and Freddie to avoid large payment spikes for homeowners. The state also worked with mortgage servicers to reduce some of the stringent requirements placed on insurance payouts, like getting detailed estimates from contractors and multiple inspections. But those actions came months after Sandy hit, and neither Texas nor Florida or Puerto Rico have taken similar measures yet.

For Anna Rosalez, a medical administrator in Houston whose home took on four feet of water, the process has been suffocating. She has flood insurance and found a contractor through a family contact. But the insurance company wants all the expenses itemized before it will release the funds to fix the house -- which she says still won't cover the full cost.

Meanwhile, Rosalez and her husband are living in a hotel, which the Federal Emergency Management Agency will stop paying for on Nov. 27. Her mortgage forbearance ends this month, too. So she'll have to resume her monthly payments of $893, on top of everything else.

"We've had to spend money that we don't have just to keep going every day," says Rosalez, 60. "It's very frustrating, very tiring."

Last week, consumer advocacy groups sent a letter to Fannie, Freddie and other agencies in the mortgage business asking that particularly hard-hit homeowners be able to hit pause on their mortgage payments for up to two years. The groups also recommended that servicers immediately give homeowners $10,000 to fund urgent repairs.

National Consumer Law Center attorney Alys Cohen says that's progress, but it doesn't free homeowners from the burden of finding a licensed contractor in order to get the insurance money they need before rebuilding.

In addition, the policy changes don't cover the approximately 40% of mortgages that are owned by private investors and banks. In Puerto Rico, that percentage is even higher. The island was already in bad economic shape before the storm and had a mortgage delinquency rate three times the national average.

Nate Hendricks is a Florida-based law firm operations manager who started the Puerto Rico Legal Project this past summer to defend homeowners facing foreclosure. He said the fact that many mortgages are held by smaller, local banks makes it more likely that lenders will move to foreclose.

Banco Popular, for example, is one of the biggest banks on the island and is only offering a three-month forbearance. In its last earnings call, it reported a $70 million increase in its quarterly loan loss allowance on the island, driven largely by mortgages that are delinquent and expected to go into foreclosure.

"There needs to be a moratorium, and then they need to set up special courts to hear these properties," Hendricks says. "Because there's going to be a slew of them."