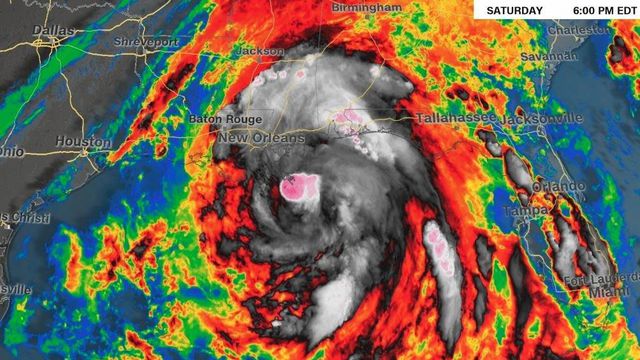 Hurricane Nate made landfall at 12:30 a.m. CT near Biloxi, Mississippi, its second and final US landfall. Nate has sustained winds of 85 mph, making it a Category 1 hurricane.

Hurricane Nate made US landfall Saturday night as a Category 1 storm near the mouth of the Mississippi River in southeast Louisiana, the National Hurricane Center said.

The hurricane center said Nate has maximum sustained winds of 85 mph. It was moving north at 20 mph.

A hurricane warning was in effect for coastal areas from the mouth of Pearl River on the border of Louisiana and Mississippi, east to the Alabama-Florida border, as of Saturday night.

Rains had already soaked coastal Alabama, Louisiana and Mississippi much of Saturday. As the storm approached the Gulf Coast, officials in Louisiana and other states implored residents to finish their storm preparations and get inside.

"After landfall, the center of Nate is expected to pass over portions of Mississippi, Alabama, and Tennessee late tonight through Sunday night," according to the National Hurricane Center's advisory issued late Saturday.

Jackson County in coastal Mississippi enacted a curfew that began at 7 p.m. CT (8 p.m. ET), several hours before the powerful northeastern side of the core is expected to arrive.

Gov. Phil Bryant urged county residents to head north away from the Gulf but there was no mandatory evacuation.

According to CNN affiliate WLOX, there were 13 shelters open in the southern part of the state.

Bryant declared a state of emergency for six counties and any others that might be affected by Nate, the state's emergency management agency said.

"The storm surge is a big thing that really traps everyone," he told CNN.

The National Weather Service said: "Wind and rain impacts will be confined to southeast Mississippi with the greatest impacts along the Interstate 59 corridor and coastal areas."

A dozen casinos in Mississippi, including the Beau Rivage and the Hard Rock Hotel & Casino in Biloxi, took the rare step of closing early as the storm moved in.

New Orleans spent most of the day under a hurricane warning that was lifted around 7 p.m. CT. While the worst of the storm was to the east, heavy rain fell in the city, and nearby Lake Pontchartrain was under a storm surge warning.

Earlier, Mayor Mitch Landrieu told residents to wrap up what they were doing and move to a safe place.

The mayor told them to keep an eye on the latest developments, but to remember that a Category 1 hurricane is still very powerful.

Landrieu said he visited the city's drainage pumps facilities and was pleased with the conditions.

After Nate made landfall, New Orleans was under a tropical storm warning and the mayor lifted a citywide curfew.

Nate once was almost as fast as an Olympic sprinter, but began to lose speed as it made contact with the Gulf Coast.

Hurricane warnings were in effect from Grand Isle, Louisiana, east to the Alabama-Florida border. Storm surge warnings included the coast from Grand Isle to the Okaloosa/Walton county line in Florida and the northern and western shores of Lake Pontchartrain.

Evacuation orders were in place outside levees in New Orleans and Plaquemines Parish, and along the Mississippi, Alabama and Florida coasts. President Trump on Friday declared an emergency in Louisiana ahead of Nate and ordered federal assistance.

Nate was expected to knock down power lines and trees from Lake Charles, Louisiana, to the Florida Panhandle and possibly leave at least 1 million people without electricity.

"Preparations to protect life and property should be rushed to completion in these areas, as tropical storm conditions will first arrive in the warning area this afternoon," the hurricane center warned Saturday morning.

Nate could drop 3 to 6 inches of rain, with 10 inches possible in some areas, from the central Gulf Coast north across the Deep South, the eastern Tennessee Valley and the southern Appalachians through Monday, the hurricane center said. Flash flooding is a danger.

Nate is the third hurricane to hit the US mainland in six weeks, after Hurricanes Harvey and Irma killed dozens of people and destroyed thousands of properties.

The storm has already carved a path of devastation in Central America. At least 28 people were killed Thursday in Costa Rica, Nicaragua and Honduras. Hundreds were rescued from floodwaters and mudslides. Many lost power and running water.

Landrieu already had ordered a mandatory evacuation of the Venetian Isles, Lake Catherine and Irish Bayou areas, which are low-lying or outside the federal hurricane-protection system that underwent a $14 billion overhaul after Katrina. He also had declared a state of emergency. At least 1,800 workers were on standby to reconnect power, if needed, he said.

Louisiana Gov. John Bel Edwards declared a state of emergency for all of Louisiana on Thursday and mobilized 1,300 National Guard troops, including some to help monitor New Orleans' drainage equipment, he said.

In Alabama, the Port of Mobile closed Saturday, meaning the Carnival Fantasy cruise ship would not be "making its scheduled call" there Sunday, the Mobile Alabama Cruise Terminal said.

The Bankhead Tunnel, a major downtown thoroughfare that passes under the Mobile River, was closed because of the hurricane, emergency officials and a reporter with CNN affiliate WPMI tweeted.

Florida Gov. Rick Scott, who had declared a state of emergency in 29 counties, said Saturday that evacuation orders were in effect Escambia and Santa Rosa counties, with shelters open for those seeking higher ground.

"This is not the time to be complacent -- do not risk your life or the life of your loved ones," he said in a statement. "Even if your home is not in the direct path of this hurricane, everyone in the Panhandle should be ready to follow your emergency plan and stay vigilant to weather alerts and updates from local officials."