Scroll to the bottom for more video memories, stories and archival coverage of Hurricane Fran.

WRAL anchors, reporters reflect on Hurricane Fran and the havoc it brought

In September 1996, Hurricane Fran battered central North Carolina. The storm came ashore near Wilmington as a Category 3 hurricane, packing 115 mph winds. Far from the coast, high winds, falling trees and power outages combined for one of the most memorable and damaging storms in state history.

“It’s been a rough night,” said WRAL meteorologist Mike Maze during Fran, then in the early days of his career at the station. “The worst I’ve seen.”

On the morning of Sept. 6, then-WRAL anchor Bill Leslie summarized the preceding 12 or so hours following Fran’s mad dash through the heart of North Carolina. His opening line of the newscast came over a shot of waves crashing ashore at the beach.

“The sea rests after a night of unrest.”

Fran was so disruptive it took quite an effort for Leslie to even get in front of a camera.

Leslie only got to the station that night thanks to photographer Jay Jennings, who picked him up near his neighborhood. Leslie said 14 trees fell in his yard at his Cary home. The landscape changed for many neighborhoods, once lush with trees that now blocked the roads.

“I knew we were in trouble when Bertha came before Fran and hit us with heavy rain,” Leslie said. “It turned the soil into pancake batter.”

Robert Carver, then a reporter with the station, remembers touring the damage and being in awe. He didn’t have to go far, as there was a huge tree across Western Boulevard and standing water at Pullen Park.

“The utter devastation of Raleigh the morning after,” Carver recalled vividly. “Driving around neighborhoods with these old trees down everywhere, on top of houses, blocking roads, just a forest of matchsticks, if you will.”

Even those who didn’t lose power or have a tree fall in the yard knew something unprecedented had happened.

When the sun came up, it was like ripping off a Band-Aid. Almost poetically, the storm moved away around daybreak but seeing the damage in daylight was an image some would never get out of their heads.

What distinguished Fran was the amount of damage done to areas well inland. Hurricane Hugo also did measurable damage to the Charlotte region in 1989. Not since Hurricane Hazel in 1954 had a hurricane done this amount of bad in the Capital City.

“One of lessons we learned, you don’t have to live down at the coast to get slammed by a hurricane,” said hurricane historian Jay Barnes. “Even though the forecast track had projected that it was going to be turning more inland, I think a lot of people didn’t quite put two and two together to understand the Triangle area was going to get hit as hard as it did.”

Outside the WRAL Studios on Western Boulevard, a peak wind gust of 71 miles per hour was reached. The basement flooded. Jim Payne and Debra Morgan were reporting live in the breezeway outside the station, trying to stand up to the wind. 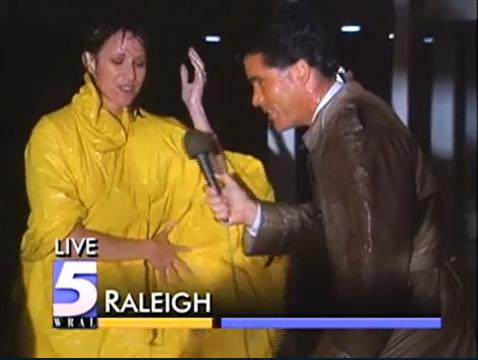 An emergency room doctor stopped at the station after finding his wife and 3-month-old in a flooded-out home. With the chaos going on, the only thing the staff could really focus on was informing the public.

But with electricity knocked out for so many, most couldn’t even turn their television on. The WRAL News broadcast was simulcast on MIX 101.5, allowing some to keep up through a battery-powered radio or car stereo.

That night no one really got any sleep. Most reporters recall WRAL being on the air all day on Friday and extended newscasts were scattered throughout the weekend.

Roughly 420 traffic lights in Raleigh were out. Raleigh firefighters got nearly 700 calls for help in the following two days.

Getting behind the wheel was a matter of putting your life into your own hands.

“Riding in that morning with Jay was probably the scariest night in my life,” Leslie said. “Jay’s a great driver, but there was just so much going on. At the rate trees were going down, it almost sounded like gunfire.” 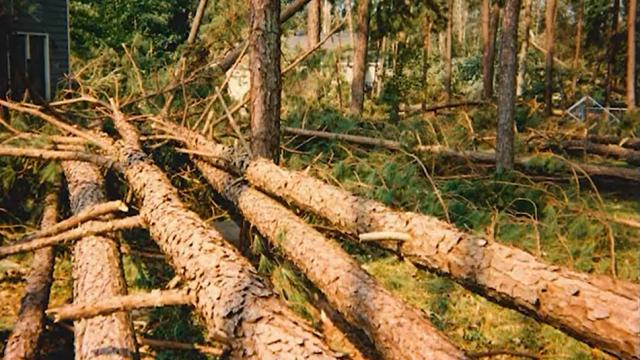 Before Fran there was Bertha.

Hurricane Bertha had struck in July, making landfall at the North Carolina coast. Bertha was a Category 2 storm. It destroyed 5,000 homes in the U.S., mostly in North Carolina.

Fishing piers at Carolina Beach, Kure Beach, Topsail Island and Surf City were destroyed. The Emerald Isle police chief told WRAL News at the time that it was the worst damage the town had seen in 15 years.

Then Fran formed off the west coast of Africa in the middle of August.

Fran started out as a tropical depression on Aug. 23, became a tropical storm on Aug. 28 and finally a hurricane on Aug. 29.

“It seemed pretty clear from the forecast most of the guys in the [WRAL] Weather Center and National Hurricane Center that this had potential of being something serious,” said Jennings.

Initial projections put Fran hitting Myrtle Beach. In the hours leading up to landfall, Fran slipped up the coastline toward Wilmington.

It hit as a major, Category 3 hurricane with maximum sustained winds of 115 miles per hour at 8:30 p.m. around Bald Head Island. Fran was downgraded to a tropical storm around 3 a.m. before the eye passed over Raleigh. At Raleigh-Durham International Airport, a record-breaking 79 mph wind gust was recorded.

Fran dumped 8.8 inches of rain on the Triangle, then the highest rainfall ever recorded in the area.

At Crabtree Valley Mall, stores were closed for weeks, even months due to flooding.

“We drove into Raleigh three days into the storm and I just couldn’t believe my eyes, just trees blocking every other road, some people were just living in their front yards,” said WRAL reporter Amanda Lamb.

Where gas stations were open, long lines formed. Power crews called in teams from other states to help restore electricity.

Hurricane Fran by the numbers

Fran’s path seemed to follow the Cape Fear River or along Interstate 40 with Wilmington being the first populated area to get hit. At the coast, low-lying communities like Topsail Island were completely overwhelmed by storm surge and many cottages were destroyed. There was extensive erosion at Emerald Isle and Pine Knoll Shores.

On the eastern side of the storm, Pender, Onslow and Carteret counties all received the worst of the winds. The coastal areas were heavily impacted by Bertha, but the intensity of Fran and the scope of the damage put the storm into a whole new category of impact.

In the rural areas, thousands of acres of crops were blown down or flooded out, hurting the state's agricultural output.

One scene showed numerous times in coverage was a Wilmington church that had its steeple ripped off. The First Baptist Church on Market Street was a century-old landmark that was ripped apart.

“I cried,” Pastor Mike Queen told WRAL News after seeing the damage. “I knew it could be rebuilt, but it was just amazing sight to see that rubble.”

In the Triangle, Kerr, Jordan and Falls lakes were all impacted. In the following days, some water had to be released from Falls Lake dam to make room for more floodwater coming in.

Bahama firefighter Ricky Dorsey died on the job during Fran when a tree fell on a fire truck. He was just 19 years old.

Jennings remembers many events of that night and the surrounding few days in great detail. He flew on a helicopter with Gov. Hunt along with other media members, touring the damage at the coast on Sept. 6, his wedding anniversary.

“I can’t call home, and I can’t tell my wife where I am, what’s going on. I end up spending my anniversary flying in a Blackhawk with Gov. Hunt and other news media,” Jennings said.

Flying over the land really put the damage into a new light. Jennings recalls the governor being caught by surprise at how much damage there was in Raleigh, seemingly as much as there was back east.

"There's more damage than I've ever seen," Hunt said. "It looks like it's been bombed. Every block's got terrific damage."

"A number of houses, I think, are destroyed," Hunt said. "But also up and down the coast, we saw an awful lot of places where the beachfront's just gone." 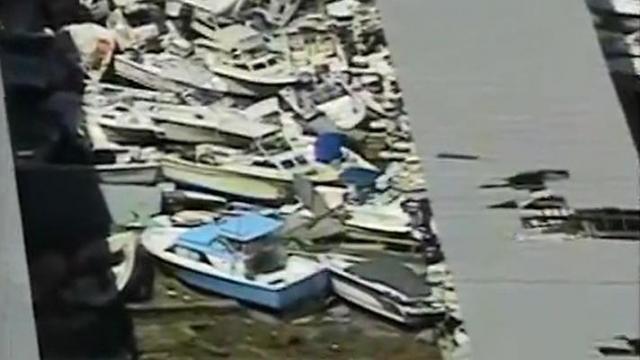 The aftermath and coming together

One thing sticks out 25 years later – there was an unending sound of chainsaws throughout neighborhoods in the days to come. Church groups and non-profit organizations pitched in to clean up. Kids were out of school for days, but many had assignments from parents to help drag limbs out to the street or bring a hot meal to a neighbor in need.

“It was one of those times where the blessing in the middle of the tragedy is all these neighborhoods coming together to help each other,” Jennings said. “A lot of neighbors helping neighbors.”

“The smell in the neighborhood was amazing, everyone’s throwing all their steaks and burgers on the grill so they don’t go bad,” Jennings said.

What would we do now?

In 1996, the Triangle wasn’t the booming population center it is today. People have moved from other parts of the country and may not be familiar with the power of hurricanes.

“We have a tremendous influx of new people compared to 1996,” said Barnes, who lives in Raleigh. "But it’s a less experienced population, we've had people move here from areas not accustomed to hurricanes.”

Since Fran, Hurricane Florence became the costliest natural disaster in North Carolina history, killing 53 people in the state in 2018. Florence slowed down as it made landfall and dumped more than 30 inches of rain in some areas at the coast.

“The unique thing about Fran is it had it all, wind storm, tremendous rainfall as well, we had severe flooding and high wind types of problem in an inland area, Hugo and Hazel are similar, you had a little bit of everything with Fran,” Barnes said.

In 2016, now-former North Carolina Emergency Management Director Mike Sprayberry told WRAL that coordination and communication between local agencies is more seamless now than in the days of Fran. Sprayberry, who responded to Fran as a National Guard member, notes there’s a 24-hour National Guard Joint Operations Center in Raleigh that's hugely helpful for the response rime.

A quarter-century later, smartphones and social media are integral methods of communication, taken for granted in daily life. But that dependence could be an hindrance when power goes out and batteries drain.

“There would be a lot of reasons it would be different [today],” Barnes said. “Our communication is so advanced to what it was, we’ve become so dependent on social media and our smartphones and our ability to keep up with what’s going on, as soon as power goes out, you can still be caught without resources you want like electricity and hot water.”

The damage caused by Fran was so severe, the National Weather Service retired the storm name.

For the millennial generation who were young in the 90s, Fran might be known as the first real dangerous weather event of their lives. The lived experiences of Fran are as much a part of North Carolina history as college basketball or Cheerwine, tales that will be passed down to from generation to generation.