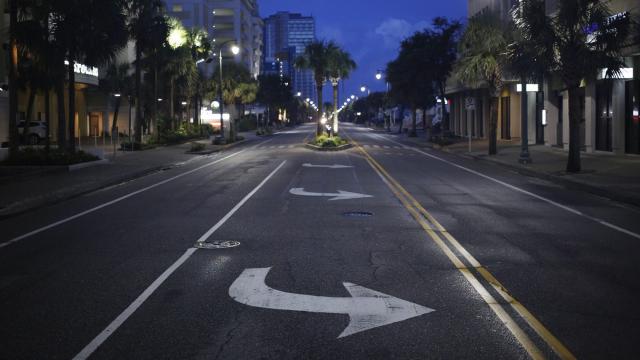 Hours before Hurricane Florence is expected to begin its assault on the Carolinas, officials warned of fierce winds, catastrophic flooding, storm surges up to 13 feet and widespread power failures as they urged residents to get out while there was still time.

Florence, now a Category 2 storm packing sustained winds of up to 110 mph, is expected to pummel the region for days, starting with heavy winds along the coast on Thursday morning. The hurricane will then gather strength and spread inland as the center of the storm edges toward the coast on Friday afternoon, bringing torrential rainfall of up to 40 inches that will continue through Saturday and Sunday.

The major power supplier for North and South Carolina, Duke Energy, said that the storm could knock out power for up to 3 million customers across the two states and that it could take several weeks to restore electricity.

The storm was predicted to slow and the eye could stall just offshore, battering the coast with high waves and dropping as much as 20 to 40 inches of rain in flood-prone coastal areas.

The center of the storm was in the Atlantic Ocean about 335 miles from Wilmington, North Carolina, on Wednesday evening, the National Hurricane Center said. It was forecast to crawl toward shore on Thursday and Friday, and move slowly along the coastline through Saturday.

President Donald Trump promised that the federal government was “ready for the big one." In a post on Twitter, Trump once again boasted about the government’s response last year to Hurricane Maria in Puerto Rico, where 3,000 people died.

In addition to powerful winds, a huge, “life-threatening storm surge” is highly likely on the low-lying coasts of North and South Carolina, the National Hurricane Center has predicted.

Officials in South Carolina said they were unnerved to learn that the projected path of the hurricane had veered south. Gov. Henry McMaster said Wednesday that 300,000 people in the state had evacuated.

Parts of the Carolinas could experience hurricane-force winds for 24 hours or more, said Jeff Byard, associate administrator for response and recovery at the Federal Emergency Management Agency.

“This is not going to be a glancing blow,” he said. “This is not going to be one of those storms that hit and move out to sea. This is going to be a Mike Tyson punch to the Carolina coast.” Duke Energy based its estimate of how many could lose power on modeling from previous storms as well as Florence’s projected path. That number would be about 75 percent of the company’s more than 4 million customers in North and South Carolina.

“People could be without power for a very long time,” David Fountain, president of Duke Energy North Carolina, said, adding that Duke will monitor the Brunswick nuclear plant and shut it down if necessary.

It is unusual for storms as strong as Florence to barrel straight at the North Carolina coast. The last Category 4 hurricane to do so was Hazel in 1954. That storm was famous for its destructiveness. Most storms that reach the coastal United States tend to track farther south, hitting Florida or entering the Gulf of Mexico.

“This could be an unprecedented disaster for North Carolina,” Brian McNoldy, a senior research associate at the University of Miami, said in a post Tuesday on his popular hurricane blog.

Storms that do follow a path across the Atlantic similar to Florence generally tend to turn north before they reach the coast. This year, though, an atmospheric phenomenon known as a blocking high spun off from the jet stream “like a swirl in the river that separates itself from the main flow,” has prevented Florence from making that turn, said Jennifer Francis, a research professor at Rutgers University.

A body of recent research suggests that disruptions to the jet stream — an apparent result of climate change — have weakened the currents that tend to move weather systems, Francis added. As a result, she said, “we are seeing this tendency for weather patterns to basically get stuck in place in the summertime,” whether it is drought in the West or the drenching summer rains in the Midwest this year.

In Carolina Beach, North Carolina, an island community south of Wilmington, about 75 percent of the residents had left, according to Michael Cramer, the town manager.

Cramer said he was worried about projections that Florence would be comparable to Hurricane Hazel, which nearly wiped his town of 6,200 year-round residents off the map in 1954. It destroyed 362 buildings there.

The coastline that Florence will plow into this week is, if anything, even more vulnerable. Americans have flocked to the nation’s shores and built extensively in recent decades, ensuring that any modern storm will damage much more property than those of previous generations. The trend has also put many more people directly in harm’s way. In 2010, 123 million people, or 39 percent of Americans, lived in counties directly on the shoreline. That is a 40 percent increase since 1970. The 2020 census is expected to show that figure growing by 10 million people.

That growth has occurred as climate change has made the coasts more vulnerable. Gabriel Vecchi, a climate scientist at Princeton University, noted that a rising sea level adds to the destructiveness of storm surges, and a warming atmosphere holds more moisture, leading to more rain.

“Right now, I would focus on everybody getting safe, and away from Florence,” Vecchi said. “But afterward, there’s other questions that need to be asked.”

Deciding whether to stay or go

As Hurricane Florence stared down at the Carolina coast, many residents were making last-minute decisions about whether to evacuate or ride the storm out.

In Carolina Beach, North Carolina, which sits on an exposed barrier island, Mike Patel is selling almost everything in his grocery store at half-price.

Many customers at the Sea Merchants grocery live from paycheck to paycheck, he said, and cannot afford to evacuate. Some are short of cash after paying for back-to-school items.

“Some of these people are suffering,” he said. “A hurricane is not the time to make things worse for them.”

“It’s like a family here — their pain is my pain,” Patel said as he ran the register Wednesday for customers buying water, bread, ice, sodas, canned food and charcoal as stiff winds whipped waves on a beach a few blocks away.

In Nags Head, North Carolina, the mayor, Ben Cahoon, said he and his wife had decided to stay despite mandatory evacuation orders — one from the state and one locally that he helped put in place.

“There are folks like myself, who have lived here a long time, who sort of have a sense about these things,” he said of Nags Head, a small beach town in the Outer Banks. “Whether that’s entirely rational or not, that’s something else.”

Cahoon, 56, said he is staying for both personal and professional reasons — a desire to be home to be available in case he can help.

“We don’t really strong-arm people to get out,” he said, “but we want them to understand the risks they are taking by staying.”

Farther inland, residents who remembered the flooding from Hurricane Matthew in 2016 and Hurricane Hugo in 1989 were hoping to avoid a third catastrophe.

“We are actually moving stuff as much as we can out of the house,” said Regina Cobb, 50, of Princeville, the nation’s oldest town established by African-Americans. “The town hasn’t recovered from the last time. There are still a lot of people who haven’t moved back home.”

“If it floods this time, I think my family is out,” she said. “We’ve been discussing this the past couple of days. This is God’s way of saying: ‘It’s time to do something different.'” In South Carolina, the former mayor of Charleston, Joseph P. Riley Jr., and his wife, Charlotte, made the call to leave.

Many of their neighbors on Charleston’s historic peninsula had chosen to stay put, he said, figuring they could tough out a few feet of storm surge. But Joseph Riley, 75, said they decided to roll up some of the rugs, put them on the second floor, and get out. There were just enough possibilities that worried him.

“Our children are grown, and they’re squared away,” Riley said. “And then we have my sister-in-law who lives in Camden. She’s always happy to see us, and it’s nice to visit.”

For those trying to travel by plane, flights continued in and out of the cities expected to be hit by Florence, but with an increasing number of disruptions. A quarter of the flights into Wilmington, North Carolina, were canceled by midday Wednesday, while 1 in 5 flights could not get to Charleston, South Carolina, according to FlightAware, which provides real-time tracking.

Many more flights were expected to be canceled in the affected area on Thursday and Friday, and some airports planned to close entirely. Charleston International Airport announced that its runways would shut down at 11:50 p.m. ET Wednesday and stay that way through at least through Friday. Airlines have announced steps to protect their employees and passengers in the storm’s path while trying to minimize its effect on their operations. Delta Air Lines, United Airlines, American Airlines and JetBlue are all offering waivers that will allow customers to change their flights free of charge for the rest of the week if their itinerary includes airports likely to be affected. Both Delta and United also suspended fees for baggage and bringing pets into the cabin.

Last year, airlines faced criticism for raising prices from airports in hurricane evacuation zones. Many this year, including American, Delta and United, have implemented price caps or special fares to prevent that from happening again. Delta also increased capacity on some routes in the area to facilitate evacuations.

Automotive and aerospace businesses, major industries in the Carolinas, have slowed or stopped work in anticipation of the storm. Boeing suspended production at its assembly plant in North Charleston, South Carolina, at noon on Tuesday. The aircraft manufacturer also took steps to protect its expensive wide-body planes, moving at least six 787 Dreamliners to an airport near the company’s factory in Everett, Washington, according to Flightradar24.com, a flight tracker.

There was also a scramble by car dealers. Hendrick Automotive Group, which owns dozens of dealerships in the Southeast, closed its franchises in Charleston as well as in Jacksonville and Wilmington, North Carolina. It planned to close several others in North Carolina on Wednesday evening.

Automaking, so far, has been less affected. In the South Carolina hills, 200 miles from the coast, the BMW manufacturing plant is continuing to produce sport utility vehicles. While the plant may encounter storm winds and rain, the hurricane’s effect should be muted so far inland, a company spokesman said.

Still, BMW has diverted rail cars carrying finished vehicles to secure holding areas until the storm passes. Farther south, officials at a major port in Savannah, Georgia, expressed relief at the latest projections for the storm. Tensions were high on Tuesday when the city looked to be in Florence’s path, just as East Coast ports ramp up for the holiday retail season.

But on Wednesday, Robert Morris, a spokesman for the Georgia Ports Authority, said: “It looks like we’re just in for a rain event with some strong winds. Right now it’s business as usual.”

As Hurricane Florence continued to threaten the Carolinas, the National Weather Service also projected that Tropical Storm Isaac would move over the Lesser Antilles islands and across the Caribbean Sea through the weekend, bringing up to 4 inches of rain to Puerto Rico and the U.S. Virgin Islands that could cause flash-flooding.

In the Pacific, Tropical Storm Olivia is expected to move across the Hawaiian islands, especially Maui and Oahu, bringing up to 15 inches of rain and the possibility of “life-threatening” flash flooding through Thursday. The Weather Service warned of high surf and wind gusts that could knock out power and rip off tree limbs.