Hurricane Epsilon makes a 'wobbly' northwest turn in the Atlantic

Hurricane Epsilon continued to churn toward Bermuda on Thursday afternoon after making what the National Hurricane Center called a “wobbly” turn toward the northwest.

The storm, the 10th hurricane of an extremely active Atlantic season, was about 195 miles east of Bermuda, according to an 8 p.m. Eastern advisory from the hurricane center. Epsilon weakened over the course of the morning and was moving north-northwest at 9 mph with maximum sustained winds of 85 mph, below the strength of a Category 2 storm. 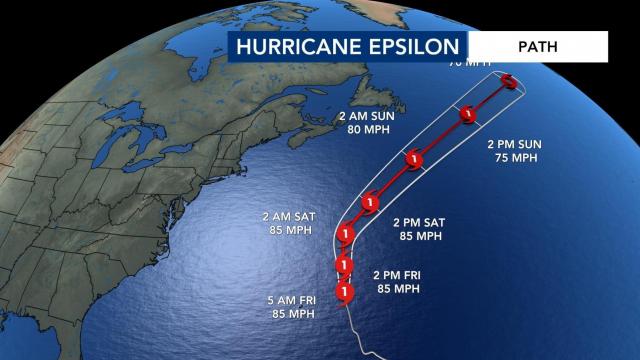 Bermuda remained under a tropical storm warning, meaning that tropical storm conditions were intermittently expected somewhere in the area through Thursday night, the center said. Epsilon’s eye was forecast to make its closest approach to the east of the island nation later Thursday evening.

Epsilon was forecast to turn toward the north-northwest Thursday, then toward the north Friday with an acceleration toward the northeast Saturday. The storm is not currently expected to make landfall in the United States, but its effects will be felt, said Dennis Feltgen, a spokesman and meteorologist with the National Hurricane Center in Miami.

He said the East Coast of the United States and parts of Canada’s Atlantic coast will have large swells with rip-current conditions and life-threatening surf.

Here are the records we're breaking this hurricane season

“Anyone going to the beach needs to be aware from now into the weekend,” he said.

Large sea swells generated by Epsilon had already begun affecting Bermuda, the Bahamas, the Greater Antilles and the Leeward Islands, the center said.

Emergency officials in Bermuda warned residents of the swells Wednesday.

“I want to urge people to stay out of the water until Epsilon passes,” the minister of national security, Renee Ming, said at a news conference. She added that the hurricane was a reminder for residents to check their emergency and storm supplies, restock provisions if needed and secure outdoor furniture.

“These are the basic steps that have worked well in helping us successfully weather previous storms,” she said.

Epsilon is now a Category 3 Hurricane

In a statement, Ming said the hurricane has continued to produce “large swells,” and reiterated an earlier warning that people “stay out of the water.” She also noted there are Dangerous Surf Advisory signs already posted at south shore beaches.

Meteorologists said some fluctuations in intensity were possible for Epsilon, a large hurricane, but that it was expected to weaken Thursday and into the weekend.

Epsilon quickly strengthened Wednesday when it went from Category 1 to Category 3 within a matter of hours. “Epsilon has continued to defy expectations and rapidly intensify,” the hurricane center said in a statement Wednesday evening.

As a Category 3, it had become the fourth major hurricane — those of Category 3 intensity or greater — of the season, which still has more than a month to go.

It was also the second major hurricane to form in the Atlantic this month, along with Delta, which slammed into Lake Charles, a Louisiana city still not recovered from a hit by Hurricane Laura in August.

Hurricane Paulette was one of the most recent storms to affect Bermuda, knocking down power lines but causing only minimal property damage when it made landfall there Sept. 14. The storm hovered over the island longer than the Bermuda Weather Service had predicted. Hurricane Teddy passed to the east of the island Sept. 21, causing tropical storm conditions there.

This year’s Atlantic hurricane season is one of the most active on record, meteorologists said. So far, there have been 26 named storms, of which 10 were hurricanes. It’s near the record set in 2005, when 28 storms grew strong enough to have names; 14 of them were hurricanes, according to the National Oceanic and Atmospheric Administration. “It was forecast to be an extremely active season, or what I call hyperactive,” Feltgen said of this year’s season. “We are staying right on the money.”

“We have a number of weeks left,” Feltgen said. “We are not done yet.”

In May, NOAA predicted an above-normal season in the Atlantic, but in August, government scientists updated their outlook.

In recent decades, scientists have seen increased hurricane activity in the North Atlantic, by a measure that combines intensity with characteristics like duration and frequency of storms. Climate scientists say there are links between global warming and at least the intensity of hurricanes. As ocean temperatures rise, hurricanes grow stronger as warm water serves as the fuel that powers them.