Hunters for the Hungry seeks deer donations to turn into food

A few weeks earlier, he’d donated venison from his deer processing plant in Asheboro to the nearby Randolph County Senior Adults Association. The organization, trying to beat an incoming snowstorm, quickly doled out the meat to some of its homebound residents through a Meals on Wheels program.

Craven didn’t think much of it — such donations were standard practice at the plant he’s run since 2008. But when a 92-year-old man popped into his shop that day to personally thank him for his help, he was shocked, flattered and emotional.

The man, who used a wheelchair, said he had been a “bad father.” He’d learned from his mistakes. His children, though, never forgave him. He had no friends close by. No family present in his life.

“Nobody cares about me,” he told Craven.

Ahead of the storm, the senior center delivered him four packs of Craven’s ground venison and some crackers. When he was snowed in and couldn’t be reached for three days, that was the only meat in his fridge. He used it to make soup.

Once the roads had cleared, he arranged for his caretaker to drive him to Craven’s Deer Processing so he could tell the owner his story.

“That’s strong,” Craven said, “when a man gets wheeled into your business just because he wants to tell you thank you.”

Six years later, the moment’s still fresh on Craven’s mind. It’s also a tangible example, he said, of what North Carolina Hunters for the Hungry can do.

Since 1993, Hunters for the Hungry — the non-profit at the root of that donation and thousands more — has provided a simple process for supplying free deer meat to those who need it most.

Hunters legally kill and donate deer; processors convert it into venison burger; and it’s distributed to food banks, soup kitchens, churches and other organizations. Hunters for the Hungry, on average, turns 1,000 deer into 160,000 servings of protein a year. 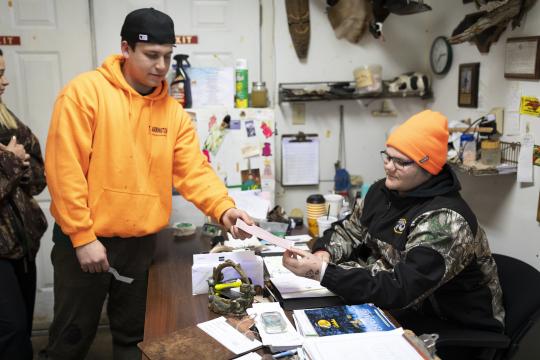 As the main deer season begins in most of the state in November, there’s still plenty of room for growth. Less than 1% of North Carolina’s yearly deer harvest is donated to Hunters for the Hungry, and the all-volunteer organization is making its annual push for more recognition and participation from hunters and non-hunters alike.

“Some people don’t think that animals should be hunted,” treasurer David Blake said. “Whether you do or you don’t, this is one of those things you really can’t complain about. It’s a full circle of life.”

A century ago, North Carolina’s whitetail deer population was about 10,000, according to the N.C. Wildlife Resources Commission. As for today? Estimates range from 1 million to 1.2 million.

The cause of the growth is clear. North Carolina implemented a major restoration program from the 1940s to the 1970s, stocking about 4,000 deer throughout the state.

At the same time, fewer people were living off the land and hunting. Animals such as bears, wolves and mountain lions also dwindled, which left humans as the only main predator to control the state’s deer population.

And that population grows fast. Over a five-year period, a single doe and her offspring can produce 31 more deer. Deer overpopulation is a well-documented issue; it leads to more vehicle collisions, more disease and damage to urban landscapes and agricultural fields alike.

“We’re blessed with a bountiful number of deer, but that can go awry if not managed well,” said Judy Gardner, who lives in Lillington and works with Hunters for the Hungry.

Case in point: It’s no coincidence that the organization began in the mid-1990s, when the N.C. Department of Agriculture and longtime Commissioner Jim Graham were looking to curb a far-too-large deer population.

The department loosened regulations, allowing hunters more chances for “either-sex” hunts, in which they could harvest male and female deer. In 1993, Hunters for the Hungry was founded as a tax-exempt, 501(c)(3) non-profit — and, 26 years later, its mission of processing with a purpose hasn’t changed.

‘All the deer we can get’

No one affiliated with Hungers for the Hungry is paid. It’s purely volunteer — and that was an issue early on.

The business model hinges on donations, which balance out the processing costs of each individual deer and are paid directly to the respective processor.

In 2019, the rate is $60 for a full deer and $50 for a deer that’s been field dressed, or skinned and gutted, by a hunter. As it laid its fundraising roots, the group had to cap itself at a certain number of deer a year to break even.

Funding is still a prevalent issue — “We want to take all the deer we can get, but we want to make sure we have enough money to pay for it,” Blake said — but the organization has found some footing through grants from the N.C. Wildlife Resources Commissions and money from private donors.

Accessibility has helped, too. Hunters for the Hungry works with 17 certified deer processors across the state. There are also five drop-off sites, including the Harnett Area Deer Donation Site that Gardner runs with her husband, Guy.

Such sites will clean, wash and preserve deer before dropping them off at the nearest processor themselves rather than making local hunters do it. It all plays into Hunters for the Hungry’s goal to make things “free and easy” for donors, as Gardner put it.

In terms of monetary donations, the pitch is also simple: Your money will go directly to producing venison for hungry people across the state — not someone’s pocket.

“I’d say probably 97% of the money we make is used to process deer,” Blake said.

He was back in 1993, when Hunters for the Hungry began and some family members — he won’t name names — told him he was “too little” a processor to help. The next deer season, Pearce joined and handled 87% of the state’s donations by himself.

In the years since, Pearce’s Custom Processing has blossomed into Hunters for the Hungry’s largest processor. Pearce, who has been in deer processing for 48 years, runs a tight ship and dedicated operation. This fall, he’ll take his usual two days off: Christmas Eve and Christmas.

The career outdoorsman has also kept extensive records of donations — later this year, his plant will surpass 2.5 million free meals produced for Hunters for the Hungry.

“I didn’t do it by myself,” Pearce said. “I may have been up here directing traffic, but all these hunters coming in here are supplying the meat. It’s a great big team effort. I’m just the one who got to stand up there and direct traffic. But, you know, it took everybody to get there.”

That’s an overwhelming theme of Hunters for the Hungry: team effort. The organization functions without a formal headquarters. Members such as Pearce, Craven and Gardner spread the word on their own — to churches, to civic centers, to rotary clubs, to their normal clients — and often serve and deliver the venison, too.

This fall, the Hunters for the Hungry will do more of just that: bringing venison full circle to the hungry people of the state and, if things go as planned, finding a few new volunteers along the way, so they can keep building on what they began 26 years ago.

“A lot of people, their first deer, before they fill their freezer, they’ll donate,” Craven said. “It’s not like they don’t want the deer. It’s because they’ve done it over the years, and they’ve met people who have benefited from it. They want to bless somebody first before they get their own blessings.”