There is a time where singers will see a payoff to their long hours of dedicated vocal practice and singing in the shower. Most singers feel that all they need to make it big is a chance; Just one opportunity to be heard. That chance for many aspiring singers came today.

Fox 50 held its "The X Factor" contest at Crabtree Valley Mall in Raleigh on Saturday. On the line: Four guaranteed auditions in front of "X Factor" producers when the national auditions hit Greensboro in May.

When audition tables opened at 9 a.m., there was already a line stretching out of the door. Many waited in line for two or three or even four hours. 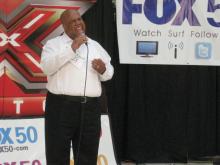 Watching performance after performance, something occurred to me: they meant business. They knew going in they only had 15 seconds to make a lasting impression on the judges, and almost everyone took advantage of their time.

It was an amazing feeling: you could tell that each contestant gave 110 percent. Of course, there were some contestants that didn’t sing as well as others, but I knew regardless of talent that everyone gave it their all.

Check out our photos from the auditions

Song choice was very diverse. Out of 300 contestants, song choice varied from Frank Sinatra to the gospel inspired group, Mary Mary, to multi – platinum artists such as Beyonce and Alicia Keys. 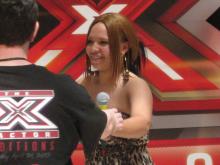 Unsuspecting people around Crabtree stopped at the promotional court, where auditions were being held, to listen in on those trying to make it big. Over the course of the day, the crowd built up and filled the court, as well as the balcony overlooking.

The four winners will be announced Monday during WRAL News at 10 p.m. on Fox 50.