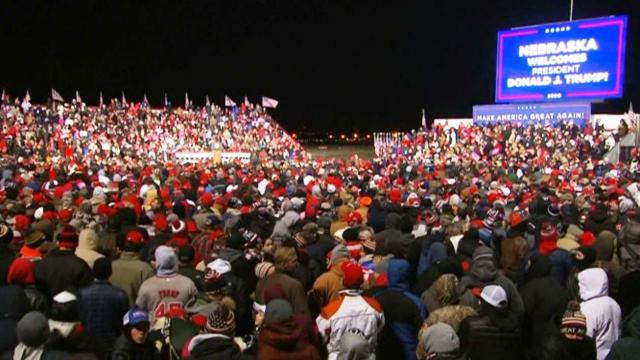 CNN — When President Donald Trump left Omaha on Tuesday, thousands watched and cheered in the frigid air as Air Force One took off into the night sky. But for these loyal supporters, their experience at the Trump rally was far from over.

For the next several hours, hundreds and hundreds of people who attended the rally were stranded, as a chaotic scene unfolded on dark roads on a remote stretch near the Omaha airport. They waited for buses that didn't arrive, unable to reach the site because of a clogged two-lane road.

Many people started walking to their cars, parked three or four miles away, which blocked the roads even further. Several medics were seen by CNN giving attention to people in the bone-chilling evening air. The temperature was right at freezing, but wind chills were far lower.

Earlier in the night, the President commented on the weather.

"I mean, I'm standing here freezing. I ask you one little favor: get the hell out and vote," Trump said to cheers from the crowd. "The great red wave. At least you're down there with each other. I'm all up here and that wind is blowing."

The Trump campaign did not immediately respond to a CNN request for comment.

After the rally, police officers tried to control the scene, but struggled to bring order to the pandemonium. There were no campaign advance teams in sight. One local advance volunteer said they were given no instructions how to get supporters back onto the buses.

For months, the Trump campaign has utilized the practice of busing supporters from parking lots to the rally sites as a way to accommodate the large crowds. His events have been held in locations such as small airports that don't normally draw rally sized crowds and therefore don't have onsite parking available to support the crush of people and crowds.

That has created a scenario where thousands of people are left to wait for hours after the event ends for buses to shuttle them back to their cars. At an event in Gastonia, North Carolina, last Wednesday hundreds of supporters were forced to make the decision to either wait for the bus or walk several miles down a busy road, without sidewalks, to their parking lots.

Even those who make it on a bus, only do so after a long wait packed in with hundreds of other people -- most not wearing a mask -- until they board the bus where every single seat is taken and no social distancing is practiced.

It's unlikely that any of the rally-goers would change their votes since they count as some of the most committed supporters. But it's hardly the kind of local news you want to generate -- especially in Nebraska, which is experiencing a fourth-straight week of record Covid cases.