Migrants Rush U.S. Border in Tijuana, but Fall Back in Face of Tear Gas 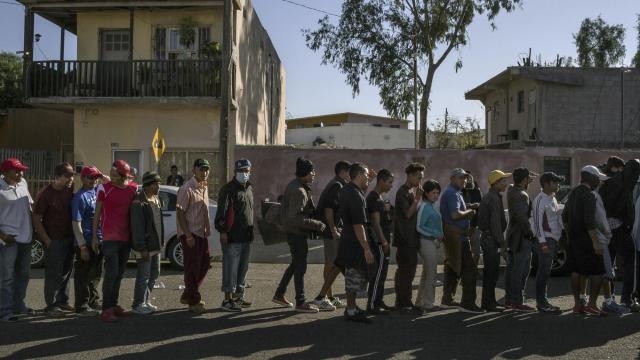 TIJUANA, Mexico — A peaceful march by Central American migrants waiting at the southwestern U.S. border veered out of control on Sunday afternoon, as hundreds of people tried to evade a Mexican police blockade and run toward a giant border crossing that leads into San Diego.

In response, the U.S. Customs and Border Protection agency shut down the border crossing in both directions and fired tear gas to push back migrants from the border fence.

Soon after the migrants began their midday march to the border in Tijuana, Mexico, they were met by Mexican federal police officers at a bridge that leads to the San Ysidro border crossing, through which millions of people and vehicles pass each year. At that point, many of the marchers bypassed police by running across a dry riverbed.

Police, carrying anti-riot shields, then formed a new line and appeared to contain the rush of migrants 100 yards or more from the crossing. They erected metal barriers on the roads and sidewalks leading to the main border crossing for cars and trucks.

A smaller group of migrants then tried to make their way to a train border crossing about 10 minutes away, where they were stopped by tear gas released by U.S. Customs and Border Protection officers.

After the gas had cleared, Mexican federal police officers then pushed back the protesters from the area of the train crossing.

Customs and Border Protection officers also released tear gas at a separate point a few hundred yards away to drive back the migrants.

In both cases, the gas canisters that were fired landed on the U.S. side of the border, but the gas carried into Mexico.

Some of the migrants told The New York Times they thought they could negotiate with U.S. officials, but as they approached the metal border fence topped with barbed wire, they were met with several rounds of tear gas. A few men tried to climb the wall but fell back in the face of the gas.

On Twitter, Sen. Brian Schatz, D-Hawaii, wrote that the “tear gas across the border against unarmed families is a new low.”

Mexican authorities said that 39 marchers had been arrested, and that those who had “violently” and “illegally” tried to cross the U.S. border would be deported.

The unrest in Tijuana comes amid broader discussions about how to deal with the growing number of migrants fleeing poverty and violence in Central America who are amassed at crossing points in Tijuana and elsewhere along the border.

Mexico inaugurates a new president, Andrés Manuel López Obrador, next Saturday, and top Cabinet officials in his incoming government had planned to meet on Sunday to discuss possible solutions for dealing with the population, including potentially allowing migrants applying for asylum in the United States to stay in Mexico while they are being processed.

The Trump administration has demanded that Mexico agree to host migrants who apply for asylum in the United States at the southern border as they wait for their hearing before an immigration judge in the United States. The wait can last months or even years, during which time many migrants are released and allowed to work under rules that President Donald Trump has described as “catch and release” and has vowed to change.

But the meeting of the incoming administration officials in Mexico City to discuss a response was derailed by the chaotic events along the Ysidro border crossing. The focus of the meeting immediately shifted to the day’s crisis, and the political implications it might have for the treatment of migrants and the anti-migrant sentiment it might incite in Mexico.

Trump wrote on Twitter on Sunday that it “Would be very SMART if Mexico would stop the Caravans long before they get to our Southern Border, or if originating countries would not let them form.”

Thousands of migrants began arriving in Tijuana about 10 days ago and have been housed since then in squalid conditions in a community sports center that has been converted into a makeshift shelter. Many have become increasingly desperate with the realization of the obstacles still before them in reaching the United States.

Tijuana city officials say they have no money to improve conditions at the sports center, where more than 5,000 migrants are sheltering in a space with capacity for no more than 3,500.

Fani Caballero, 32, a migrant from Honduras, sat by the train tracks, within sight of U.S. agents on the other side of the border fence. Her daughter, Cristina, 7, cried as Customs and Border Protection helicopters circled overhead.

“People had thought that they were going to open the gates, but that was a lie,” Caballero said. “We thought it would be easier.” She had signed up for an interview with a U.S. asylum officer, the first step in the asylum application process — but the surge of migrants with the caravan meant that she would be waiting for weeks.

“Now, I guess I’ll just wait my turn, because I can’t go back to my country,” she said.

As she got ready in the morning to join the march, Marta Alicia Martinez Padilla, 26, was asked what she hoped to accomplish by going to the border. “We want to see if they’ll give us permission to go to the U.S.,” she said. “That’s our goal, and we’ve been asking God to bring us there.”