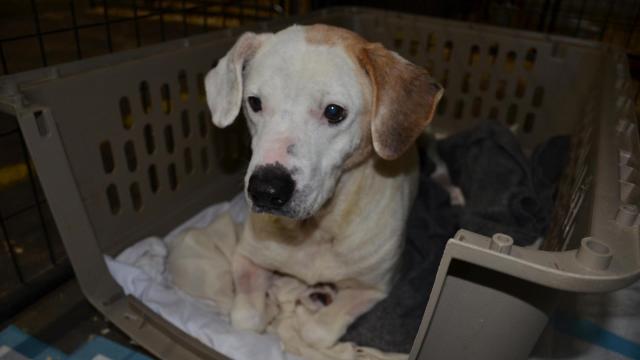 Sanford, N.C. — Six weeks after being rescued from an unlicensed shelter in Hoke County, about 650 dogs and cats will be ready to go to new homes during an adoption event next weekend at a temporary American Society for the Prevention of Cruelty to Animals shelter in Lee County.

The ASPCA in January assisted Hoke County authorities in the seizure of nearly 700 dogs, cats, birds and horses from The Haven – Friends for Life shelter.

After receiving care at a facility in Sanford, the dogs and cats are now ready to find forever homes. Meet some of the adoptable animals.

Adoption fees will be waived during the event, and each animal will have been micro-chipped, spayed and neutered. Adoptions will take place between 10 a.m. and 6 p.m. March 18-20 at a facility at 2215 Nash St., Sanford.

People who want to adopt a dog or cat should bring identification, proof of address and an appropriate-size carrier for the animal they adopt.

Authorities charged Linden Spear and her husband, Stephen, with four counts of animal cruelty and three counts of possession of a controlled substance, stemming from an animal medication not authorized on the property.

The couple also was served a misdemeanor criminal summons for violation of a solid-waste disposal ordinance. Authorities say animals and feces were found in plastic bags throughout the property.

The Haven failed state inspections for more than a decade but was never shut down.

During the four-day seizure, dozens of animals were found buried in makeshift graves. One dog and one cat were euthanized because of health problems. Some animals were treated for emaciation, open wounds, ringworm, respiratory illnesses and other issues.

ASPCA officials have called the raid at The Haven the largest companion-animal raid they've conducted nationwide in the last 20 years.