Hundreds gather at March for Life rally in downtown Raleigh 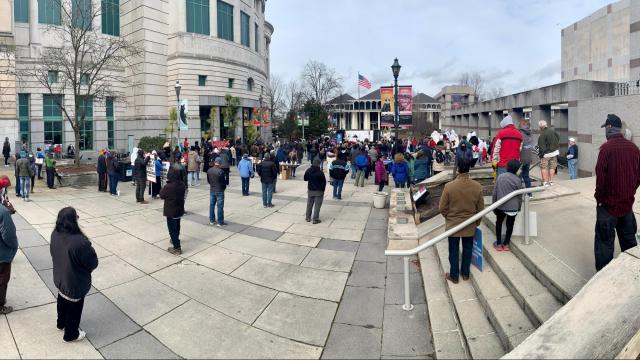 Lt. Gov. Mark Robinson made an appearance, speaking to hundreds of demonstrators in attendance at Bicentennial Plaza. Speaking out against abortion is a cause he says he refuses to remain silent about.

It’s the first local March for Life rally since the swearing in of Justice Amy Coney Barrett, which gave the Supreme Court of the United States a conservative majority.

Lauren Marlowe, demonstrator and member of the pro-life group Students for Life, believes their cause is gaining momentum.

"It's so exciting to think that she is the person that will give us the pro-life majority in the Supreme Court," Marlowe said. "That will one day lead us to reversing Roe v Wade."

Terry Salas Merritt with A Woman's Choice clinic says she’s committed to providing vital healthcare for women, despite those who oppose abortions.

"It is a choice for women with unplanned pregnancies and we stand wholeheartedly with those women," Merritt said. "We pledge to give them the quality care we're known for. We will always do so."

As for the temperament of the crowd, organizers handed out masks and hand sanitizer, about half of participants wore masks and while seven counter protestors stood across the street, things remained peaceful.