Durham, N.C. — People were happy and crying tears of joy in a unique court case in Durham County that had both sides agreeing justice had been served Thursday morning.

James Scott Berish was charged with assault with a deadly weapon inflicting serious injury and possession of a stolen firearm after he fired a gun through his apartment floor last May, striking 10-year-old Deisy Medina as she slept in the apartment below.

Thursday morning’s court hearing marked the emotional culmination of a restorative justice process that began almost a year ago. Restorative justice is a process designed to foster healing and involves counseling, the ability for victims to get answers and defendants accepting responsibility.

The process has never been used to prosecute a violent felony in the state of North Carolina.

Earlier this week, Berish and Medina met for the first time as Berish, who is also a father to a two-year-old, hugged the little girl and broke down in tears.

"There was a really beautiful long embrace between James and Deisy. That let everybody know that healing has come a long way," said Jon Powell, director of Campbell Law School's Restorative Justice Clinic. "If crime creates harm, justice ought to create healing and that's what we witnessed in ths case."

Berish read an apology letter to the family and Medina offered forgiveness during the meeting. 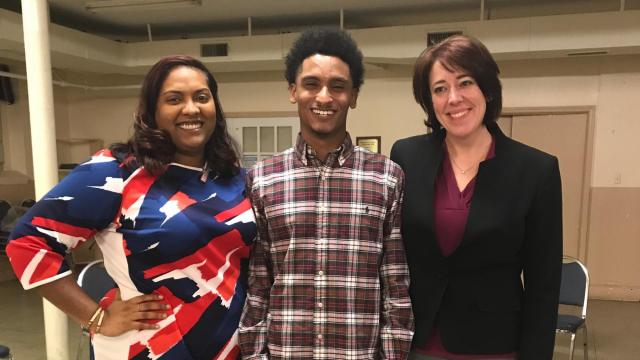 “[I was] basically apologizing to her and her family, her friends, just to give them something to know we care and we have love for their family,” Berish said of the letter.

The state said Berish accidentally fired his gun and surrendered to police as soon as he learned somebody had been injured.

"When I found out a little girl was involved, I had to turn myself in. I'm a grown man first. I don't hurt kids," Berish said.

Berish pleaded guilty to all charges Thursday morning and the judge got off the bench to hug him at the conclusion of the case.

"This is why I went to law school, this moment," said assistant district attorney Kendra Montgomery-Blinn. "These are the things that we want to do. The criminal justice system is changing and I am so proud to be a part of it."

As part of the plea, Berish’s prison sentence is suspended, but he will spend up to two years on supervised probation. He was also ordered to pay $1,380 in restitution to Medina’s family and must agree to never own a weapon again.

Berish has also agreed to speak at a minimum of two gun safety events.

"I'm not even going to have a conversation about gun safety because I'm just going to let them know they don't even need no guns," Berish said.

Medina's family was not in court Thursday morning, but said the process has been one of healing for them and that Deisy is doing well and will start middle school soon.

The restorative justice process was coordinated by the Campbell Law School Restorative Justice Clinic, and the Religious Coalition for a Nonviolent Durham.