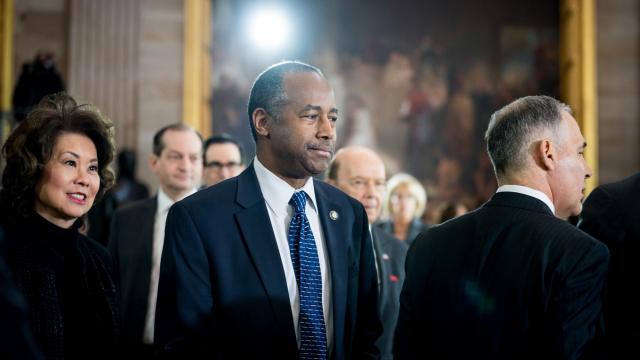 WASHINGTON — Ben Carson, the secretary of housing and urban development, is attempting to cancel a $31,000 order for a customized hardwood dining room table, chairs, sideboard and hutch the day after the chairman of the House Oversight Committee announced an investigation into the refurbishment of his HUD office.

“At the request of the secretary, the agency is working to rescind the order for the dining room set,” Armstrong Williams, Carson’s business manager and an informal adviser, said Thursday.

He added, however, that “it might not be possible.”

On Tuesday, Raffi Williams, a department spokesman, said Carson had no problem with the order and no intention of returning the table. But early Thursday, Williams said the secretary, who was sharply criticized for the purchase at a time when his agency is facing $6.8 billion in budget cuts requested by the White House, seemed to change his mind.

“Nobody was more surprised than me,” about the order, Carson said in a statement.

But several department officials, speaking on condition of anonymity for fear of retaliation, said it would have been highly unusual for Carson not to have been told that a significant section of his office suite was about to be upgraded.

According to Williams, neither Carson nor his wife, Candy Carson, had any prior knowledge of the order, although a whistleblower has said Candy Carson had pressured her to circumvent a $5,000 statutory limit on renovation expenses.

Canceling the order for the custom-made furniture will not be easy, and it is unlikely the government will recoup all its money even if the dining room set is never delivered. It was ordered Dec. 21 from a small Baltimore company.

“He’s not returning the table; he is attempting to cancel the order,” Williams said. “HUD is a bureaucracy, so everything is complicated. The person they contracted has already spent $14,000 making the table. While his intentions are to cancel it, we have to see what happens.”

Rep. Trey Gowdy, R-S.C., who is chairman of the Oversight Committee, sent Ben Carson’s staff a three-page letter Wednesday demanding an explanation for the purchase of the dining room set, which might have violated a federal law requiring congressional approval for any office renovation expense exceeding $5,000.

Gowdy is also requesting a formal response to an ethics complaint to the federal Office of Special Counsel, made by HUD’s former chief of administration, Helen G. Foster, the whistleblower alleging that Candy Carson enlisted her help in circumventing the spending cap through an intermediary. Foster claims she was demoted and transferred after she refused.

Gowdy asked the department to provide all emails and documents relevant to Foster’s claims and procurement of furniture and other expenses related to the redecorating of the secretary’s office.

Williams denied Foster’s charges and said the secretary had spent less on sprucing up the drab, wood-paneled office than any other HUD secretary in recent history.

The investigation by Gowdy comes a month after Ben Carson, under pressure from ethics watchdog groups, requested that the department’s inspector general investigate the presence of the secretary’s son, Ben Carson Jr., at HUD-sponsored meetings in Baltimore last summer.

The department’s own lawyers warned Carson that the attendance of his son, a Maryland-based entrepreneur seeking to do business with the government, posed a serious potential conflict of interest.