How to watch the inauguration 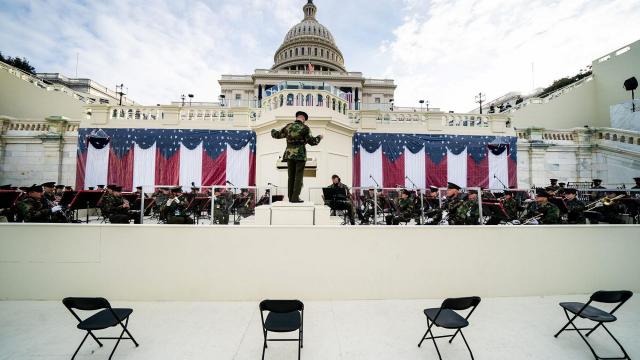 CNN — President-elect Joe Biden will be sworn in on Wednesday as the next president of the United States on an Inauguration Day that will look like no other in modern history.

In a major break with tradition, President Donald Trump and first lady Melania Trump will not welcome Biden and incoming first lady Jill Biden to the White House and will not attend the inauguration ceremony at the US Capitol.

The coronavirus pandemic that continues to devastate the nation has also altered inauguration planning. Biden and Vice President-elect Kamala Harris will still take the oath of office on the West Front of the Capitol, but the ceremony will be significantly scaled down and health and safety protocols will be put in place to minimize the risk of spreading the virus. And in place of other traditional festivities, Biden's inaugural committee is planning several virtual events, including a virtual parade after he is sworn in.

The inauguration will also take place amid heightened security concerns after the deadly riot at the Capitol by a mob of Trump supporters that left five people dead, including a Capitol Police officer, earlier this month. There are approximately 25,000 National Guard troops on the ground in Washington, DC, spokesman Major Aaron Thacker told CNN on Tuesday.

The National Mall has also been shut down amid security concerns and the general public will not be able to gather on the Mall to watch the inauguration as they have in inaugurations past. In place of a large crowd, Biden's inaugural committee has placed hundreds of thousands of American flags on the National Mall.

How can I watch CNN's coverage?

Tune in to CNN or CNN International to watch live coverage of Inauguration Day. CNN's special coverage will also stream live without requiring a cable log-in from 6 a.m. to midnight ET on Wednesday, January 20, to CNN.com's homepage and across mobile devices via CNN's apps for iOS and Android.

It can also be viewed on CNNgo via CNN.com/go on desktops, smartphones and iPads, as well as CNNgo apps for Apple TV, Amazon Fire, Android TV, Chromecast and Roku. You can also follow CNN's live coverage on CNN.com.

Here's a rundown of Wednesday's schedule:

The Trumps will fly on Marine One to Joint Base Andrews in Maryland, where Trump will have a military-style sendoff. Trump is then expected to leave from Joint Base Andrews and arrive at his Palm Beach resort by the time Biden is being sworn in.

The Bidens will wake up Wednesday morning in Blair House, the President's official guest house located steps from the White House.

They will attend a church service before the inauguration ceremony at St. Matthews in Washington, DC. Senate GOP Leader Mitch McConnell and Democratic Leader Chuck Schumer will attend the service, according to sources, and House Speaker Nancy Pelosi also plans to attend, according to an aide to Pelosi.

Biden will head to the Capitol in the late morning. He will take the oath of office on the West Front just before noon and deliver an inaugural address to the nation. Biden's remarks are expected to be somewhere between 20 and 30 minutes, according to a source familiar with the speech.

Biden, Jill Biden, Harris and her husband Doug Emhoff will then participate in a pass in review on the East Front with members of the military. Pass in reviews are a military tradition that reflects the peaceful transfer of power to a new commander-in-chief.

The Bidens, Harris and Emhoff will then visit Arlington National Cemetery to lay a wreath at the Tomb of the Unknown Soldier. They will be joined by former presidents Barack Obama, George W. Bush and Bill Clinton and former first ladies Michelle Obama, Laura Bush and Hillary Clinton.

Harris is expected to swear in three new Democratic senators Wednesday afternoon after she herself is sworn in as the new vice president, aides familiar with the matter tell CNN. She will swear in Georgia's Jon Ossoff and Raphael Warnock, as well as Harris' replacement in California, Alex Padilla. An aide to Ossoff says the swearing-in is currently scheduled for some time in the 4 p.m. EST hour, but the timing could always shift.

Biden will receive a presidential escort from 15th Street in Washington, DC, to the White House, "providing the American people and world with historic images of the President-elect proceeding to the White House without attracting large crowds and gatherings," according to the inaugural committee.

The committee said every branch of the military will be represented in the presidential escort, "including The U.S. Army Band, a Joint Service Honor Guard, and the Commander-in-Chief's Guard and Fife and Drum Corps from the 3rd U.S. Infantry 'The Old Guard.'"

The inaugural committee will then host a "virtual parade across America," which will feature performances in communities across the country -- much like the virtual program at the Democratic National Convention, which was forced to go online over the summer in efforts to keep the virus from spreading.

Biden plans to sign roughly a dozen executive orders, including rejoining the Paris climate accord and ending the travel ban on predominantly Muslim countries, on his first day in office, according to a memo from incoming White House chief of staff Ron Klain. He will also sign orders halting evictions and student loan payments during the coronavirus pandemic and issuing a mask mandate on all federal property.

Biden will then swear in day one presidential appointees in a virtual ceremony.

At 7 p.m. EST there will be a press briefing by incoming White House press secretary Jen Psaki.

From 8:30 p.m. to 10 p.m. EST, Biden's team will put on a celebrity-filled prime time special in lieu of the traditional celebrations. The special, hosted by Tom Hanks, is set to air live on CNN, ABC, CBS, NBC and MSNBC. It will feature performances from Jon Bon Jovi, who campaigned with Biden in Pennsylvania, Demi Lovato, Justin Timberlake and Ant Clemons. Biden and Harris will deliver remarks in the program.

Later in the evening, Biden and Jill Biden will appear on the Blue Room balcony at the White House.