How to stop annoying robocalls

Robocalls -- automated telephone calls that deliver a recorded message typically on behalf of a political party or telemarketing company -- have been an issue on home phones for years. Now, the same aggravating calls are also blowing up cell phones.

In August, people received more than 4.2 billion robocalls, and many were from scammers trying to trick them out of money.

Since consumers lose hundreds of millions of dollars to scams, North Carolina's attorney general just announced he's heading up a multi-state effort to at least cut down on the number of calls. Until then, there are some strategies that could help.

The best advice? Be smart. Don't be fooled by familiar area and exchange codes, which is called "spoofing," when scammers use technology to fake the number that shows up on your caller ID, to get you to answer.

"They're offering you some sort of product," said Octavio Blanco, a money editor with Consumer Reports. "They're asking you to either wire them money from your bank account into their account or go to the store and pick up a preloaded credit card and send them money that way."

Many people fall for it but, even worse, a new study says scams will account for nearly half of all mobile calls by next year! 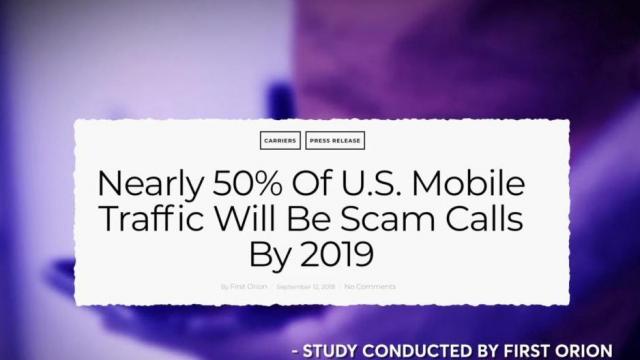 Experts say a new technology with a strange name, Stir/Shaken, could help.

It verifies where calls are from, and "sniffs out" many spoofed calls. Still, it could be years before consumers see the benefits.

"Shaken and stirred technology is promising -- it's something that's being developed by the phone providers as a way to sift out spoofed calls," said Blanco.

In the meantime, to block legitimate calls, get your number on the national Do Not Call Registry, check if your provider offers an advanced robocall-blocking service and consider a call-blocking app such as Nomorobo, Hiya and PrivacyStar. You can also report robocalls to the Federal Trade Commission through their website.