How to Connect Young People to Europe? Let Them See It All by Train 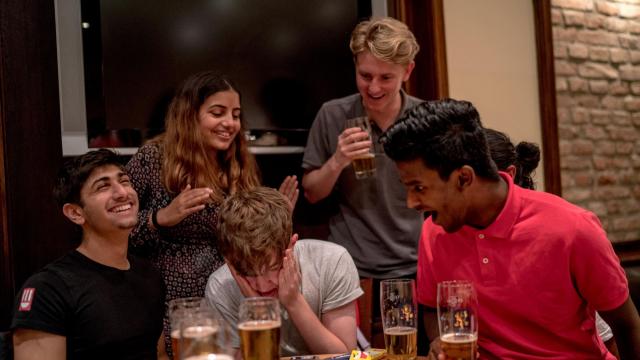 The four 18-year-olds packed their bags and set off on a familiar rite of passage for European youths: an Interrail journey. But their coming-of-age adventure arrived not only at a pivotal moment in their lives, but also in the life of the European Union.

All Londoners, with the uncertainty of Britain’s decision to leave the bloc looming over their futures, they took up the European Union on an offer to give 15,000 young people a free Interrail pass — covering a month of free travel on almost all slow trains across Europe, and discounted journeys on high-speed trains — in the hope of connecting them to the Continent.

Having spent many summers touring Europe by Interrail as a young man, I followed along to see this generation’s experience, and stayed in touch in the weeks after to follow up on their impressions.

In late summer, I visited Alfie Clarke, who is now studying German and French at Birmingham University, as he packed his bags for the journey with his friends, Rakul Sri, Shari Vockrodt and Usman Merchant.

All of the young men had just finished at Queen Elizabeth’s School in Barnet, North London. Shari knew them through going to its sister school, Henrietta Barnett. “I decided to go Interrailing because I wanted to see more countries and experience more cultures,” said Shari, who wants to be a doctor and is now studying at the University of Nottingham.

That remains the essence of the experience, even if much has changed since the Interrail pass was first introduced in 1972.

My own experience — in the days before the internet and cellphones — depended greatly on improvisation. I recall being nudged awake at dawn by the boot of a policeman outside the Venice rail station. Passports were checked at every border. Money was changed country to country. Paper maps were used until they tore at the creases.

For this generation, money was changed only once, borders were crossed invisibly, and almost everything was booked online in advance.

After embarking from central London, the group arrived at the Gare du Nord in Paris, where Alfie led the way through the streets using Google Maps.

They stayed at an Airbnb atop five steep flights of worn stairs on Rue des Dames. The apartment’s peeling paint were easily overlooked by the eager travelers. They walked to Pont d’léna and the Trocadero Gardens, and waited for the lights of the Eiffel Tower to go on.

“Even just sitting in Paris doing nothing and taking the city in with my friends was one of the highlights of my trip,” Shari said.

After one night in Paris, the group traveled to Aachen, a small northern German city where Alfie and Rakul had spent time on a school exchange trip. Friends met them at the station, and they all went to a local park. The conversation flowed into the night, occasionally turning to politics.

“All over the world young people aren’t interested in politics, which means they are not voting,” said one of their friends, Julia Reisinger, 18. “And that’s a huge problem because it means that the older generation can make decisions on what will become our problems in the future.”

Later, they made dinner at Julia’s place and hung out till 4 a.m. on the balcony, where they slept lined up like sardines.

After goodbyes the next day, and a seven-hour train ride, they arrived in Munich and checked into a youth hostel. Along the way, they made friends with an Argentine music conductor, a Cuban student and an Australian photographer.

“Living life through stories, that’s the coolest thing — the stories along the journey,” said Rakul, who wants to be a doctor and is now studying at Imperial College London.

More than 100,000 young people applied for the free Interrail passes. But it is telling of Britain’s relationship to Europe that just 4,000 young Britons did so.

“We’re already seeing the repercussions even though we haven’t even left yet,” said Alfie of Britain’s pending departure from the European Union, known as Brexit. “If we meet people in a bar, and we say we are British, they will immediately start to talk about Brexit and how it was a stupid decision.”

All four say they would have chosen to stay in the European Union, but they were not old enough to vote in the 2016 referendum.

“I’ve had this wonderful experience here, talking to people, meeting people from different backgrounds and that’s going to be reduced, that kind of rich experience of talking and listening,” Rakul said.

As the only one with just a British passport, Usman, who has started an apprenticeship at the Deloitte Touche Tohmatsu, the accounting firm, is especially worried that his ability to live, work and travel in Europe may now be curtailed.

“They’ve kind of screwed us,” he said.