How the impeachment articles against Trump are similar to, and different from, Clinton and Nixon 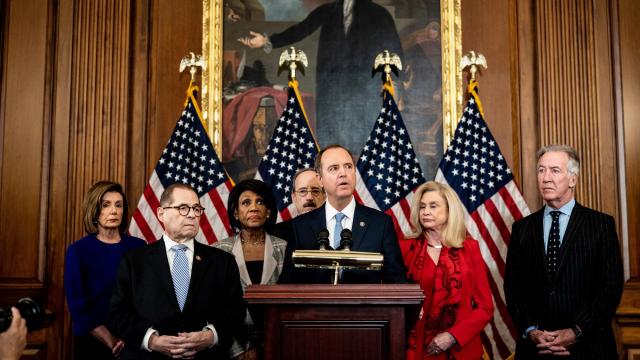 House Democrats have settled on two articles of impeachment against President Donald Trump — the first alleging abuse of power and the second alleging obstruction of Congress.

In several ways, the new articles carry historical echoes. But in other ways, they don’t. Here’s our analysis.

The two articles of impeachment against Trump

The first article says in part:

"President Trump abused the powers of the Presidency by ignoring and injuring national security and other vital national interests to obtain an improper personal political benefit. He also betrayed the nation by abusing his high office to enlist a foreign power in corrupting democratic elections."

In this article, "Democrats are combining two things that they could have separated — one allegation about abuse of office in asking for favors, and another in harm to our national security by undermining a country we are trying to help," said Stephen M. Griffin, a Tulane University law professor.

The second article focuses on Trump’s efforts to block cooperation with Congress on its impeachment inquiry.

The second article says in part:

"Without lawful cause or excuse, President Trump directed executive branch agencies, offices, and officials not to comply with those subpoenas. … In the history of the republic, no president has ever ordered the complete defiance of an impeachment inquiry or sought to obstruct and impede so comprehensively the ability of the House of Representatives to investigate ‘high crimes and misdemeanors.’"

"The House has the right under the Constitution to seek evidence in its impeachment inquiry, and it should not have to go to Court to enforce its subpoenas, which is very time-consuming," said James Robenalt, a lawyer who teaches a continuing legal education course on Watergate.

How they’re similar to past impeachment articles

Both articles offered against Trump have precedents in the impeachments of President Richard Nixon and President Bill Clinton.

The first article against Trump — abuse of power — is similar to one of the three articles approved by the House Judiciary Committee during Watergate.

And the subject of the second — obstruction of Congress — was approved by the committee against both Nixon and Clinton. (In Clinton’s case, it was voted down by the full House.)

Another similarity: Like the Nixon and Clinton precedents, the articles are fairly narrowly focused — in Trump’s case, centering on Ukraine.

The articles introduced against Trump do not address any of the elements of Russian interference in the 2016 presidential election, or its aftermath. These were the focus of Robert Mueller’s special counsel report.

That’s similar to the way the Watergate-era Judiciary Committee narrowed its focus, considering but rejecting a proposed article on the bombing of Cambodia and another on emoluments received at Nixon’s properties and allegations of tax evasion. The two articles against Clinton that passed the House were focused on Clinton’s behavior in response to the sexual harassment lawsuits against him.

Experts suggested that the narrowness of the articles is strategic.

Narrowing the focus "makes it easier to understand the case being made against the president," said Michael Gerhardt, a University of North Carolina law professor who testified on behalf of Trump’s impeachment before the Judiciary Committee.

How they’re different from past impeachment articles

In a criminal case, obstruction of justice would entail obstructing, influencing or impeding a proceeding before a department, agency, committee, or court (or attempting to do so) while having a "corrupt" mental state.

Among other things, Robenalt said, House Democrats may feel that voters "don’t want to relitigate 2016 or the complex Mueller investigation."

Another big difference with the current set of articles is that — numerically at least — House Democrats are starting small.

Offering wider options gave lawmakers of both parties the ability to pick and choose, enabling them the latitude to break ranks with their party’s dominant position if they wished.

Today, however, party polarization is so strong that experts do not expect much, if any, crossover voting.

"The Nixon articles were drafted in a committee composed of members who were persuadable, in both parties, and it was composed as the framework for an expected trial in a Senate with lots of persuadable members," said Frank O. Bowman III, professor at the University of Missouri School of Law. "The reality of the present case is that no Republican member of Judiciary, and probably not in the whole House, is persuadable. The real audience here is the electorate. For them, simple is better."

What’s not included in the articles against Trump?

In addition to spurning Mueller-related charges such as obstruction of justice, House Democrats have taken a pass on a few other topics for impeachment articles.

One is the question of emoluments — foreign payments to Trump or entities owned by his family, such as the Trump hotel in Washington, D.C. An emolument article was considered by the Judiciary Committee in the Nixon impeachment process but not pursued.

While Trump’s critics have been pursuing emolument-related questions in court, Congress "would need to gather the facts, which might be time-consuming," Griffin said.

Another potential article left on the cutting-room floor: bribery, which gained notice because it’s specifically listed in the Constitution as an impeachable offense.

Some Democrats had said that Trump’s Ukraine actions amounted to bribery. House Speaker Nancy Pelosi, D-Calif., told reporters in November that in the case of Trump’s Ukraine actions, "the bribe is to grant or withhold military assistance in return for a public statement of a fake investigation into the elections. That’s bribery."

Ultimately, though, House Democrats backed off before committing themselves to making that case against Trump.

The Watergate articles of impeachment

Article 1 focused on obstruction of justice. Nixon, it said, "using the powers of his high office, engaged personally and through his close subordinates and agents, in a course of conduct or plan designed to delay, impede, and obstruct the investigation of (the Watergate burglary); to cover up, conceal and protect those responsible; and to conceal the existence and scope of other unlawful covert activities."

Article 2 focused on abuse of power. Nixon, it said, "has repeatedly engaged in conduct violating the constitutional rights of citizens, impairing the due and proper administration of justice and the conduct of lawful inquiries, or contravening the laws governing agencies of the executive branch and the purposes of these agencies."

Article 3 focused on obstruction of Congress. Nixon, it said, "has failed without lawful cause or excuse to produce papers and things as directed by duly authorized subpoenas issued by the Committee on the Judiciary of the House of Representatives."

This article saw two Democratic defections and only two Republicans joining with the Democratic majority.

None of these three articles was voted on by the full House, because Nixon resigned before a vote was held.

The Clinton articles of impeachment

The Judiciary Committee approved four articles of impeachment, but the full House only approved two of them. First, we’ll list the two that won approval from the House.

Article 1 said Clinton had "willfully provided perjurious, false and misleading testimony" to the grand jury related to the Paula Jones and Monica Lewinsky sexual harassment cases. This article passed the committee on a party-line vote. On the floor, the article was approved 228-206, with five Republicans voting against it. Five Democrats voted for the article.

Article 3 said, in language virtually identical to Article 1 against Nixon, that Clinton had obstructed justice related to the lawsuits against him. This article also passed the committee on a party-line vote, and it passed the full House by a 221-212 margin, with 12 Republicans voting against it. Five Democrats voted for the article.

Two articles passed the committee but failed on the floor.

Article 2, like article 1, involved perjury, but it addressed Clinton’s answers in depositions rather than to the grand jury. In committee, this was a party-line vote, except for one Republican defection — then-Rep. Lindsey Graham, R-S.C. On the floor, it failed, 205-229.

Article 4 addressed obstruction of Congress. Clinton, it said, "refused and failed to respond to certain written requests" during the impeachment process. The article passed the committee on a party-line vote but failed on the floor, 148-245.