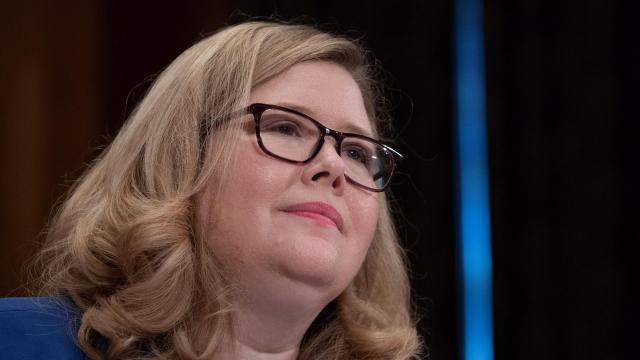 It was Friday, November 20. President Donald Trump's lawsuits challenging the election result were going nowhere, Georgia was certifying its hand recount for Biden, and both Michigan and Pennsylvania were preparing to certify their elections early the next week.

So GSA officials gave the White House a heads up that if Michigan and Pennsylvania certified their elections as expected, Murphy would formally start the transition for Biden in a process known as ascertainment, according to multiple sources familiar with the conversations.

It was a step that Murphy's critics say was long overdue, arguing the Trump political appointee was overly deferential to the White House and Trump after it was clear Biden had won the election, and that her failure to sign off on the election result had significant national security and health consequences as the Covid-19 pandemic raged on.

The message to the White House on Friday set up Murphy's decision to finally send the letter to Biden on Monday saying he could begin the transition -- as well as an effort inside the West Wing preparing Trump for his administration's first official acknowledgment of his defeat, something the President has refused to accept.

During the 16 days between the major news networks projecting the win for Biden and Murphy's letter to the former vice president on Monday evening, Trump did not directly tell Murphy to prevent the transition from starting. But he made his stance on her decision known through a steady stream of tweets contesting the election, at one point responding to an old tweet of Murphy's with "Great Job Emily."

In her letter explaining her decision on ascertainment, Murphy said she was not pressured by White House officials to grant it. But just minutes after she sent the letter to Biden, Trump seemed to undermine those claims by tweeting he was "recommending that Emily" begin the transition. A source close to Murphy adamantly denied that the two ever had any direct communication.

Inside the White House, multiple attorneys and advisers were huddled with Trump in the Oval Office and on the phone Monday, trying to persuade him to proceed with the transition, a source close to the conversations said. White House counsel Pat Cipollone and chief of staff Mark Meadows, as well as outside attorneys Jay Sekulow and Rudy Giuliani, were discussing the path forward with Trump, this source said.

A White House official referred a request for comment to GSA, and a GSA spokesperson declined to comment for this story.

After Murphy's letter, Trump praised her in the tweet in which he took credit for recommending the transition begin, thanking her for "her steadfast dedication and loyalty to our Country."

Murphy was "shocked" by the tweet, one source said.

'No procedures or standards'

Sources familiar with her thinking tell CNN that Murphy struggled with the decision as she faced a barrage of attacks, being thrust into the spotlight as one of the most visible symbols of the Trump administration's refusal to acknowledge Biden's victory. In her letter to Biden, which did not refer to him as president-elect, she noted the threats made against her and her family, while defending her decision to wait.

Murphy argued that the GSA guidelines were vague, writing that the ascertainment statute "provides no procedures or standards for this process," adding that she "looked to precedent from prior elections involving legal challenges and incomplete counts."

Sources close to Murphy told CNN there was only one precedent for her to turn to -- the 2000 election, the only other time a candidate did not concede. Murphy was concerned about the precedent that would be set by granting ascertainment when the losing candidate had yet to concede, the sources said, arguing that the GSA had waited until the race was over in the 2000 election between George W. Bush and Al Gore.

Murphy's critics, however, say she brought the condemnation on herself by failing to do her job, signing off on what has always been a perfunctory step following a presidential election.

"She had a constitutional responsibility to sign that letter weeks ago when it was quite clear who had won," said Rep. Gerry Connolly, a Virginia Democrat who leads the House Oversight Committee on Government Operations, which oversees GSA. "She's in a position of authority, she took an oath and she equivocated because of political pressure from one person, her boss."

Biden was projected the winner of the election on November 7 by all of the major news networks after his lead in Pennsylvania grew to more than 30,000 votes, meaning Trump could overtake him only if he overturned the results in multiple states -- a scenario that was all but impossible.

But Trump did not concede, instead choosing to spread false claims of widespread voter fraud -- which he had been laying the groundwork for even before any votes were cast. Trump vowed to fight to overturn the results in multiple states through the courts.

By late on November 9, it was clear Murphy was going to side with Trump's challenge to the election, and she would not sign off on allowing the transition to begin. A GSA spokesperson said in a statement that day Murphy would follow prior precedent from the Bush-Gore recount.

It was an explanation that didn't sit well with Democrats. It was clear who won the 2020 election, they argued, unlike in 2000, when the contest was decided by several hundred votes in Florida and a recount that wound up in the Supreme Court.

The failure to begin the transition had numerous implications. Biden's team could not talk to the government agencies or gain access to critical data about the Covid-19 pandemic and vaccine distribution plans. Biden was not allowed to receive the classified President's Daily Brief, which is typically given to presidents-elect so they have the latest intelligence and threats.

Connolly joined Democratic Reps. Bill Pascrell of New Jersey and Dana Titus of Nevada and sent Murphy a letter demanding a briefing to explain the delay in ascertainment -- the first of what would become numerous letters from Democrats to Murphy.

The letters were met with silence, but she did communicate with one Democratic lawmaker: Rep. Mike Quigley of Illinois, the chairman of the House Appropriations subcommittee that oversaw GSA, according to a source familiar with the conversations.

Early on, Quigley had clashed with Murphy over plans for a new FBI headquarters building. His questions to her about the President's involvement in the decision had prompted the GSA inspector general to conclude Murphy had misled Congress about her Oval Office meeting on rebuilding the headquarters across the street from Trump's Washington hotel. But the two had nevertheless developed a working relationship while putting together legislation to fund the agency.

The source said Murphy and Quigley talked through the process of ascertainment and Murphy's rationale for waiting, and Quigley encouraged her to move forward.

Outside of Quigley's quiet diplomacy, congressional Democrats and the Biden team were in a difficult position.

Biden's team had threatened legal action against the GSA, and congressional Democrats vowed to haul Murphy in for a hearing if she would not explain what the holdup was about. But both faced the risk of a protracted legal battle with Murphy that would move Biden farther from the outcome he was seeking: ascertainment.

So congressional Democrats went on a letter-writing campaign, demanding briefings and charging that Murphy was failing to do her constitutional duty. Biden warned in a speech that "more people may die" if there were no coordination on the coronavirus pandemic planning.

Murphy didn't get much cover from congressional Republicans. As Trump continued to make false claims that the election had been stolen from him, establishment Republicans, a group Murphy considers herself a part of, mostly refused to say Biden had won the election or to speak out against the President's attacks on the electoral process.

Roughly a week ago, Murphy started inching toward ascertainment when the Trump campaign lost or dropped nine court cases challenging Biden's victory in a single day, said sources familiar with the decision.

But the delay dragged on as Trump's team vowed to keep on fighting in court, insisting the results of the election could still be overturned in multiple states. They kept losing those court cases, however, and the key states marched forward with certification. On Friday, Georgia's Republican governor and secretary of state certified the state's election for Biden after a hand recount.

Michigan and Pennsylvania were preparing to do the same by Monday or Tuesday, offering a rationale for Murphy to move forward with ascertainment after waiting for two weeks.

The timing of both states' certifications remained uncertain. But the Trump campaign's Pennsylvania lawsuit was tossed on Saturday in a withering decision, removing a key obstacle to certification. In Michigan, meanwhile, one of the two Republicans on the four-person canvassing board was expected to vote against certification, leaving open the possibility that the board could deadlock. The other Republican had not spoken before the meeting.

On Monday morning, sources close to Murphy believed ascertainment was imminent. Soon after the Michigan canvassing meeting began at 1 p.m. ET, it looked like it would drag into the evening before the certification vote, and it appeared less likely certification would happen on Monday, one source familiar with the dynamics said.

Then around 4:30 p.m. ET, the board paused its public comment period -- which still had hundreds of people waiting to speak -- and took the vote to certify, with the second GOP member joining the Democrats in favor while the other abstained.

GSA did not give the Biden transition team a heads up it was planning to send a letter. But a little more than an hour after Michigan certified its election, Murphy sent a letter to Biden saying that he could begin the transition.

The letter failed to refer to Biden as President-elect, nor did it say she explicitly was granting ascertainment. But it allowed Biden to start the transition and gave him access to $6.3 million in government funding provided under the law, officially ending the 16-day standoff between an obscure federal agency head and the next US president.